You are here: Home / Heal / DIY Vanilla Extract Made with Just 2 Ingredients
Jump to Recipe·Print Recipe

DIY vanilla extract may be dear to make but it surpasses the flavor of store bought.  Made with just two ingredients, the recipe can be completed in as little as 10 minutes.

Vanilla extract is one of the easiest flavorings to make from scratch.  It only needs two ingredients — vanilla beans and alcohol.  Think of it as a tincture used for flavoring, rather than medicine.  It makes an exquisite gift, too, so while the vanilla is brewing, be on the lookout for giftable glass bottles to decant it into. 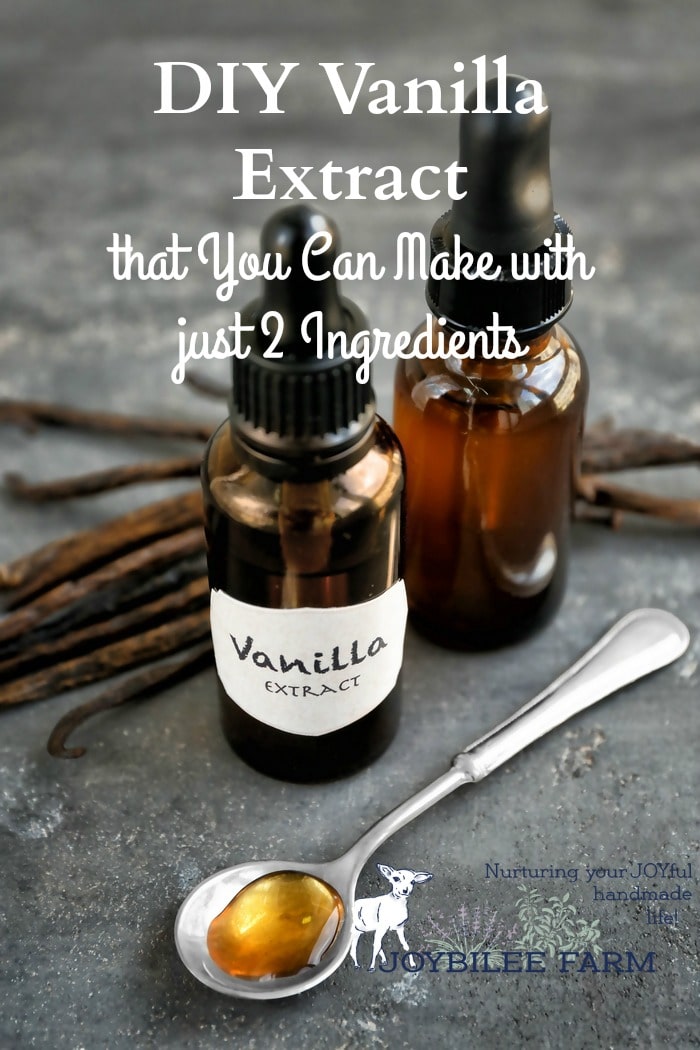 While commercial extracts have added sugar, the sugar isn’t necessary to extract the flavor.  When I buy vanilla extract I get Costco’s Kirkland brand which lists on the ingredient label vanilla bean extractives in water, alcohol (35%) and sugar.  That’s a short list and a good substitute if you don’t want to make your own.  But if you’ve ever tasted homemade diy vanilla extract, you won’t be satisfied with store bought again.

Artificial vanilla flavor is labelled “vanillin” — the chemical name for an extract made from lignin or wood pulp.  The chemical flavor of natural vanilla beans contains vanillin, too, plus over 100 other substances including flavinoids and poly-phenols.  Now that you know that, I’m sure you’ll want to use natural vanilla rather than the artificial product, from now on.

Where vanilla comes from:

The fruit takes 9 months from pollination until harvest.  But the fruits don’t have the vanilla scent at harvest time.  The fruit has to go through a four step process that includes fermentation before the fruit becomes the vanilla bean that we covet.

The complicated process that gives vanilla beans their amazing flavour

When you hear about how the vanilla gets into the bean, you’ll wonder how on earth any one ever thought to do that.  First the beans are harvested, sized, and graded.  The beans are blanched to stop the ripening process and begin the vanillin production.  Vanillin is the characteristic flavor of the vanilla beans.   The beans are then wrapped and put in wooden crates to begin the fermentation.

The beans are placed in the sun for a few hours each day, and then wrapped in cloth to keep in the warmth.  Then they are crated every evening.  This causes the moist beans to ferment, giving them their blackened appearance, and stimulating the vanilla scent and flavor in the beans.

After 10 days the fruits are dried slowly alternating between sun and shade.  If the drying process happens too fast, the beans lose their vanillin scent and flavor, so this is the most exacting step and needs the attention of an expert.  Then the beans are cured for 6 months in closed wooden boxes, maturing their fragrance and flavor.  Finally the vanilla beans are graded by fragrance and color.

The grade B vanilla is usually used for extract.  It’s less expensive than the top grade and just as flavorful, but usually has cosmetic challenges and a lower moisture content.  You don’t need the extra moisture anyway.

If you are buying vanilla beans in a specialty grocery store, they should come packaged in glass tubes to preserve their flavor.  (Glass is nonreactive.)

This recipe makes regulation strength vanilla — 1 vanilla bean per ounce of alcohol.  You will use this vanilla in the same way that you would use store bought vanilla.

I’ve seen a lot of vanilla extract recipes around the web that use only 4 to 6 beans per quart of alcohol.  If you opt for using fewer vanilla beans, you’ll still get vanilla flavored alcohol, but you’ll need to use more homemade vanilla in your recipes, to get the same intense flavor as store bought.  You’ll be adding more alcohol and more liquid to your recipes, too.  So if you want to get regulation strength vanilla extract, start with using 1 vanilla bean per ounce of alcohol or 2 1/2 ounces of vanilla beans per 750ml of alcohol, and you won’t be disappointed. 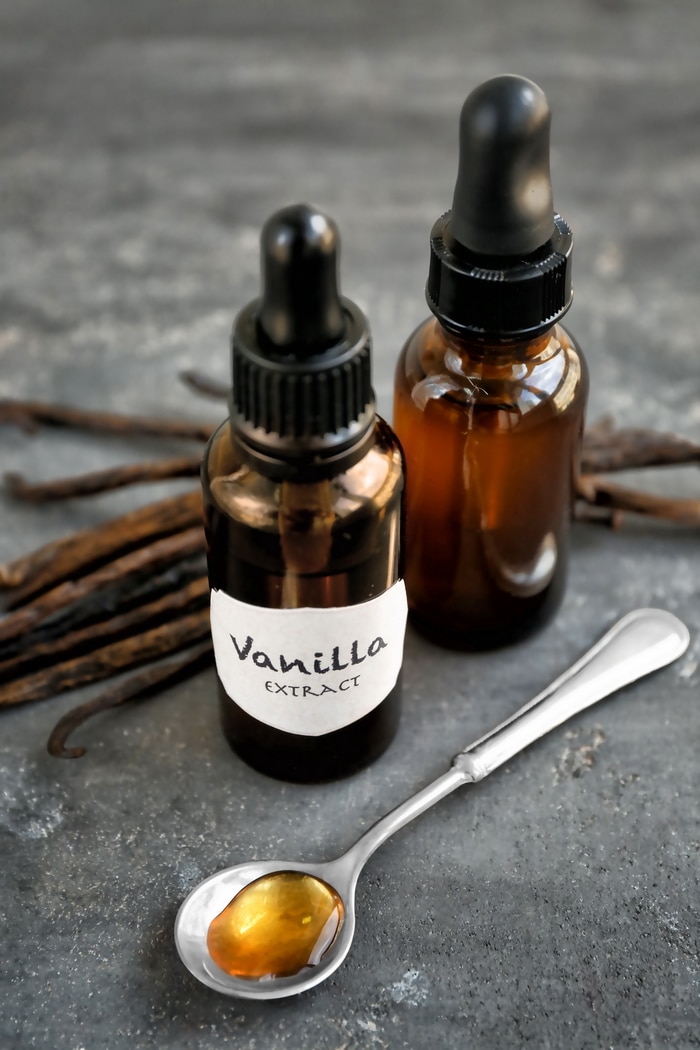 Why are vanilla beans so expensive

Update: The price of vanilla beans has increased about 500% since I wrote this article in 2014.  In 2016 chocolate manufacturers gave in to public pressure and promised to switch from vanillin to natural vanilla flavor in their products.   The sudden increase in demand left a world shortage of vanilla beans which drove up prices.  Vanilla is the world’s second most expensive spice after saffron.  Your DIY vanilla flavoring is an exquisite gift worthy of royalty.

Vanilla enhances the flavor of chocolate, improves the appetite and was traditionally used as an aphrodisiac.

Vanilla enhances the flavor of chocolate, improves the appetite and was traditionally used as an aphrodisiac.  This recipe uses 1 vanilla bean per fluid ounce of bourbon or vodka.

In a hurry and need a small gift fast? For smaller amounts of vanilla place 1 split vanilla bean in a 1 ounce amber bottle with dropper lid.  Top up the bottle with bourbon.  Cap tightly.  Label.  It’s ready for gift giving.  Just add a ribbon. 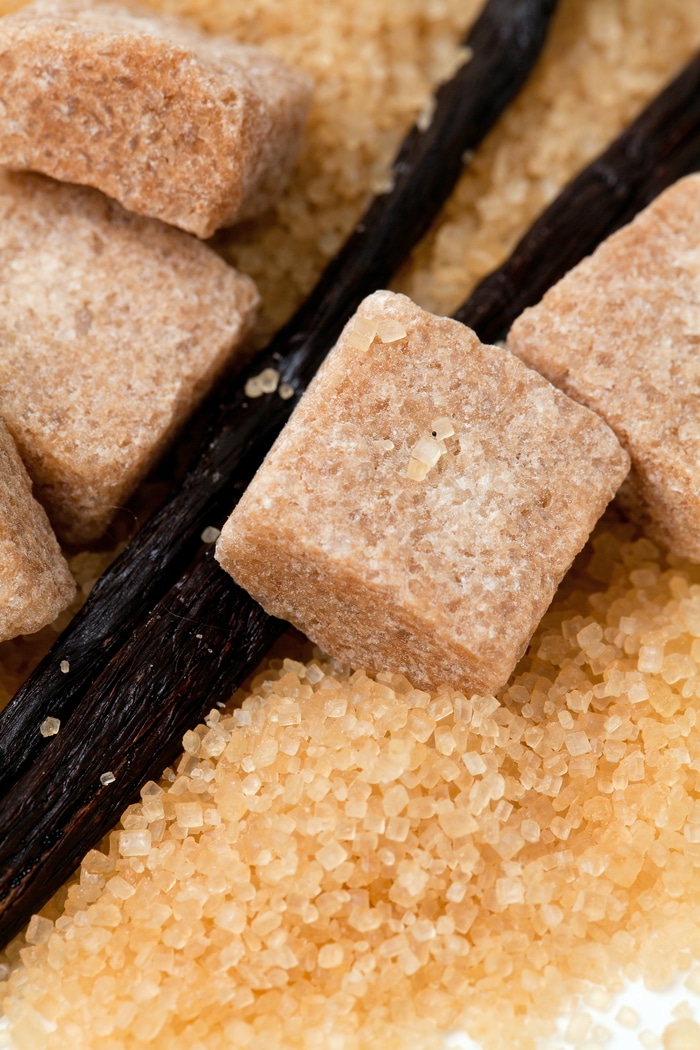 Don’t toss the vanilla beans when you’re finished though.  They still have lots of flavour.  Add them to a mason jar full of organic sugar.  And leave them for a month or more.  Stir the sugar a few times every week or shake the jar.  The beans will flavour the sugar, too.  Use vanilla sugar in ice cream, coffee, tea, and in baking or even for indulging sugar scrubs.

Other DIY extracts to delight your baking friends:

Previous Post: « The Best Gluten-Free Pumpkin Cheesecake to Make Ahead for the Holidays
Next Post: 3 Reasons Herbs Don’t Work and What To Do About It »