Vintage linen is a rare and beautiful textile that has no peer in modern fabric.   It is worth taking the time to seek it out in antique shops, thrift shops, and garage sales.  Vintage linen fabrics hold a softness and lustre that can’t be imitated.  They radiate quality and comfort when used in your home.

True linen is now rare, soon to be extinct.  Linen, the fiber in the outer stem of select flax varieties, is no longer being processed in many of the areas of the world, where it was a traditional cash crop.  Although the plant itself is continuing to be grown, the processing is being outsourced to China.  Linen can still be called “Irish Linen” or “Belgium Linen” provided that the country of origin for the original crop remains the same, but the product is extremely different than what received that label prior to 2008.  But what passes for “linen’ today is not the same fabric of just 25 years ago.  When you understand the history of linen you, too, will want to preserve this ancient textile before it becomes extinct. 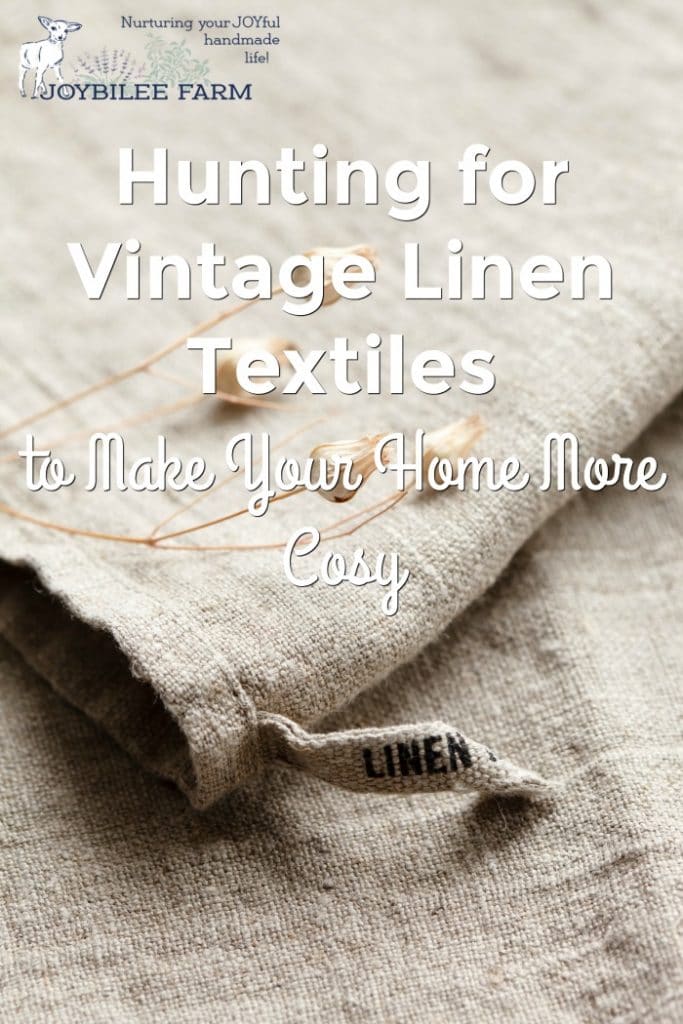 The effects of the 2008 crash on Linen Textiles

During the economic crash of 2008, much of the scutching mill equipment in Ireland, Belgium, Holland, and other countries, once famous for their linen textiles, was sold to Chinese investors and moved to China.  However, the Chinese milling process is much different than the traditional process.  In China the fiber is “cottonized” and chopped into shorter fibers, making it less expensive to process.  Linen fibers, by definition, must be over 12 inches in length and traditional linen fiber was often 24 inches or longer.  This is the quality that gave linen both its outstanding sheen, and its durability.  When processed as shorter fibers, it loses both its sheen and longevity – allowing it to be processed as cotton blends and offering the same longevity as cotton garments.  While linen retains its coolness, absorbency, and value as a summer fabric, it no longer has the smooth, crisp feel of traditional linen textiles.  This is because the linen fibers are much shorter. 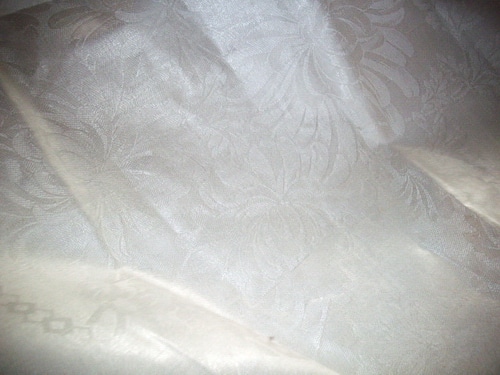 Where to find Linen Textiles

True linen can still be found in thrift shops, garage sales, and second hand stores.  It’s common to find linen tablecloths and linen napkins in these places among an array of polyester, cotton, ramay, and acrylic textiles.  It’s worth the search, if you don’t mind the extra care that linen requires.

On Tuesday, Sarah and I had a rare opportunity to browse the shops in downtown Grand Forks (Canada) and we wandered into the Hospital Auxiliary Thrift Shop.  As I always do, I headed for the dry goods area and checked for tablecloths, table runners, and napkins.  Often there is nothing there, but this time, I found treasure — three 100% linen tablecloths, ranging in price from $6 to $8.  I didn’t hesitate to take them directly to the till.

The volunteers wanted to know what was so special about the table cloths – they are just linen and that means ironing.  No one wants to iron these days.  That’s when I found out, if I had come in earlier I could have walked away with several more.  Linen tablecloths were leaving the store all day. 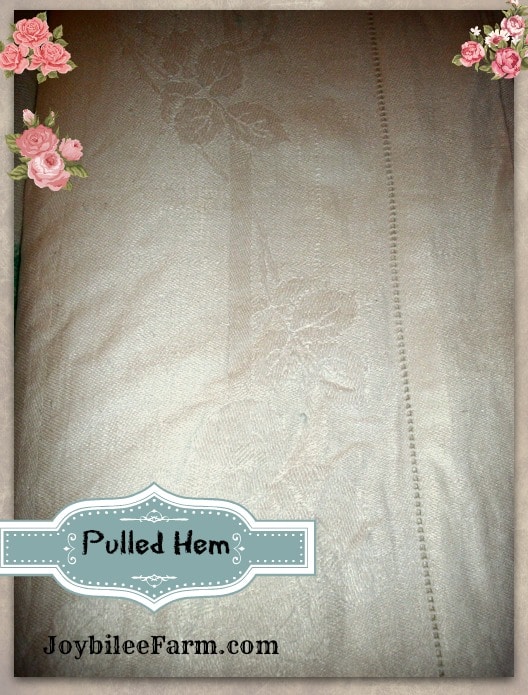 One of the tablecloths, I picked out, is especially interesting as it has a pulled doubled-hem.  Most linen tablecloths that I come across have a simple folded over and machine stitched hem.  All three textiles were rose patterned jacquard weaves. The pulled hem will help to date this textile, as after the 1930s, manufacturers cut corners to save money on manufacturing and details such as pulled threads, and intricate hemming, which added to the durability of the textile, were dropped in favor of machine processing.  In fact during the Great Depression, linen tablecloths were grown and woven in Scotland and sent to Canada without hemming, to make them more affordable to brides during the economic downturn of the dirty thirties.

“Good quality linen can never be termed an extravagance. If one has the means it is always economy to buy the best. Though the initial outlay is bigger, the extra cost is an investment that pays dividends in appearance and wearing qualities” —  The Universal Home Guide, 1932, Edited by Joan Wheeler, Odhams Press Ltd., London.

During World War 2 linen was used during the war effort to make ropes for the Navy and no linen was available for domestic textiles.  After World War 2, polyesters and textiles treated with polymers to make them wrinkle free, took the place of linen in much household textiles, although linen was still grown and woven.

After 1950, Linen became a specialty textile rather than an essential part of everyday living.  By the 1980s, most household textiles were permanent press.  Linen tablecloths were bridal boutique items only. 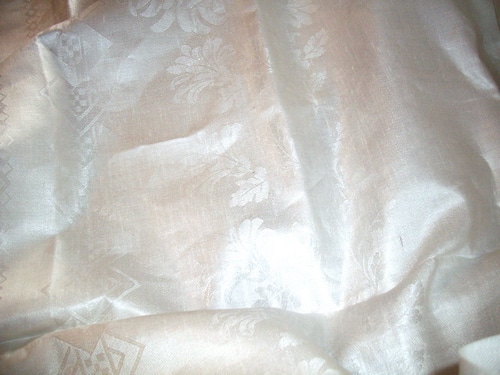 Double Damask has a mirror image on each side.

In the 1990s, within the European Union, linen textiles were revived as a regional item, and were marketed to tourists.  Irish linen, instead of being woven in traditional patterns like the rose or the chrysanthemum, started being decorated with traditional tourist emblems like the Irish Wolf Hound,  harp, and shamrock.  However, with the economic recessions in the 80s, 90s, 2000s and then 2008, the linen industry was faltering.  At the same time India and China revived their age-old textile manufacturing, specializing in cotton, rayon, and silk, while duties and excise taxes were removed on textile imports from most Asian countries.  Linen as we knew it is almost extinct.

My SIL inherited several linen tablecloths from her grandparents.  I’m not sure if she ever used them.  I know that she didn’t have time to iron textiles.  To her they were just table cloths.  And they sat in the top of her textile cupboard wrinkled and unused for years.  Most folks value linen about the same as my SIL.  If you have family members that don’t value linen, but have a store of family heirloom linen, perhaps they would let you preserve them instead.  It doesn’t hurt to let your extended family know that you value the family linen textiles and would be willing to preserve them on behalf of the family. 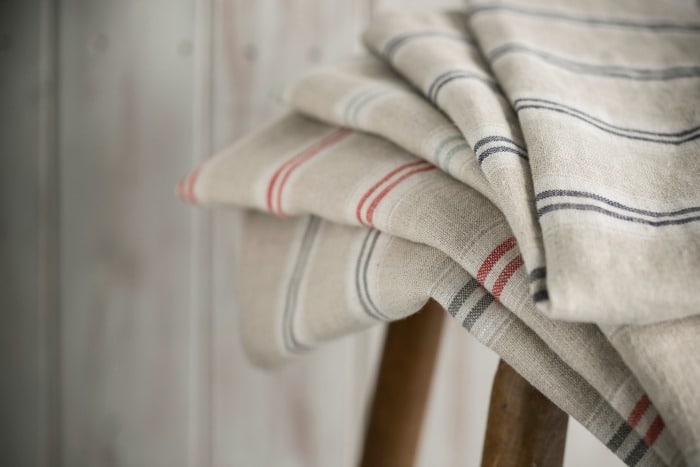 If you find linen in the thrift shop or an antique store – it is a rare piece.  It will never be made again.  If you love textiles as I do, and you love to find unexpected treasures, a linen treasure hunt can be very gratifying.  Expect to pay anywhere from $5 to $25 for a quality linen tablecloth or napkin-tablecloth set, that is stain-free.  $25 is the most I’ve paid for a still in the box, with the label attached, never used, napkin and table cloth set from the 1930s, from an antique dealer.  Thrift stores should be around the $5 to $10 range.  Garage sales should be between $3 and $7.

Don’t let the store owners know that this quality of linen will never be manufactured again.  Keep the secret and linen textiles at second hand stores will remain affordable for a few more years. 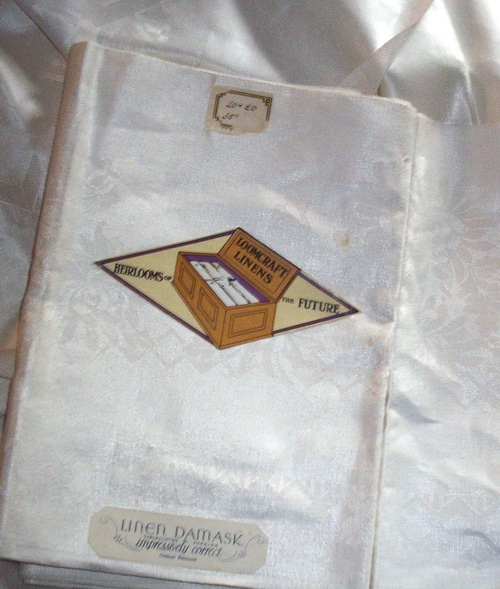 Why should you care about linen?

Linen is a heritage textile.  It was grown and processed by hand for 6,000 years of human history.  Only in the industrial age, was the process done by machine, and even then, it was the last textile process to be relegated to machine processing.

Linen textiles last for generations, due to the long smooth fibers.  It is not unusual for linen garments and household textiles to be passed down from grandparents to the next generation.  If you collect linen textiles you are collecting them for your children and your children’s children.  It is an unselfish pursuit, like planting a walnut tree.

Linen processing is the height of skill and dexterity.  Handspinners learn to spin wool and cotton fibers first and once they are adept at these shorter fibers, linen becomes the next mastery.  Many years of skill building have gone into every linen textile, whether it was processed by hand or machine.  Its more than a piece of cloth, Linen is a part of the human heritage.

What to do with your linen once you find it?

Unless your find is a museum textile that requires archival care, you can wash it in a washing machine set on delicate.  Use a mild liquid detergent like this one and warm water.  Do not use chlorine bleach.  If you find any stains on the cloth, use diluted hydrogen peroxide to treat the stains.

Ideally you will want to hang your linen textiles outside on a clothes line in full sun.  The sun has a natural affinity to white linen and will bleach it back to bright white.  While putting the linen cloth in the dryer won’t harm it, I prefer to hang linen to dry.  It is kinder to the cloth and will extend it’s useful life.

Iron while still slightly damp.  Or use a steam iron and linen spray to bring the crisp, smooth finish back to your new treasure.

Linen can be stored in cedar chests or in a linen cupboard.  Textile moths don’t normally bother linen fabrics.  Linen textiles that are not used may develop weaknesses along the fold lines.  Air the linens on the clothes line and refold them to keep them supple and prevent damage.

And please don’t be afraid to use your antique linens.  They just get softer and more beautiful with use.

What is your favorite type of textile to hunt for at antique stores, thrift shops, and curiosity shops? Leave a comment.

Previous Post: « What If I Told You Your Christmas Tree Was More than Just a Decoration?
Next Post: Natural Inks and Dyes to Color Your World Happy »