Exquisite linen.  Smooth, cold, shimmering, durable, and woven with history, in every thread.  Linen stands the test of time.  Its beauty deepens with age.  Its economic importance grew nations.  In fact in Ireland, it was so important that stealing cloth from the bleaching green was a capital offence. However,  today the majority of linen in the world, regardless of where it is grown, is baled and sent to China for processing.  While linen was once defined as flax fiber longer than 12 inches in length, anything shorter being classed as second quality tow, today linen is routinely ‘cottonized’ by chopping it into shorter lint so that it can be processed on cotton equipment and blended with the much cheaper cotton fiber.  True linen is gone from our post modern economics.  It is no longer manufactured and the skills to create it by hand are quickly dying.  However, the lesser quality “tow” is misnamed “linen” and sold to the unsuspecting consumer, as if it was its high end sibling.  Caveat Emptor.

This is one reason why Joybilee Farm has an annual linen festival every August — this year on August 11th at the Farm.  We want to see the skills necessary to process, spin, and weave this exquisite cloth, kept alive for future generations.  Another aspect of our passion for linen is to reveal the history of linen — a 5,000 year history that predates the ancient Sumerian civilization at Babel, and radiates from there following the path of human migration.

Last weekend we travelled to Vancouver to visit my new grand daughter, Lily.  Robin and I had a chance to visit historic Fort Langley and shop in my favourite antique mall and as always I looked for linen.  It seems no one else is interested in real linen and the prices in this area for linen cloth are fairly low.  That will change as more and more collectors realize that historic linen is no longer being made.  I lucked out.  Not only did I find linen but I found a story.  Its a story of resilience.  Its a story of endurance.  Its a story of craftsmanship and beauty in the face of adversity and economic struggles. Its a story of inspiration for today.

In the 1930s, when the world was struggling with the Great Depression, Europe was facing an ideological war with communism, facism, and racial tension.  Families were struggling to survive.  Great Britain was still great, although her ruling of the seas during the Victorian era, was coming to an end with the end of the War to End All Wars (WW1).    The Loomcraft company of Scottish Linen weavers, a high end household linen weaving firm met the challenges of the changing times by changing their merchandising.

The loomcraft company manufactured exquisite, heavy, double damask table cloths and napkins.  I can imagine the weavers at large powered jacquard looms, checking the warp threads and making sure the automated pattern ran properly.  Jacquard looms were the first computers.  They created the double damask patterning by a punch card system.  This video shows a Jacquard loom in operation:

Loomcraft double damask linen table cloths and napkins were imported into Canada by Murphy-Gambles, a department store on Spark street in Ottawa.  In 1930, the table linens were marketed to brides for their hope chests.  The beautiful table linens came in 4 designs — rose, tulip, chrysanthemum, and lily of the valley.  The linen table cloths and napkins sold in gift boxes for $7.95 for a 2 x 2 1/2 yard table cloth, and $7.95 for 12 napkins.  By 1934 the Loomcraft company was no longer hemstitching the table cloths and napkins but the store, Murphy-Gambles offered a free hemstitching service to its customers.  The sale price on these beautiful linen tablecloths and napkins hovered around $6 for table cloth and $5 for napkins, throughout the 1930s.  By the end of the decade prices had dropped to $5 for both napkins and table cloth, sold as yardage, without hem stitching.  The store was the direct importer of Loomcraft Linens into Canada, from Scotland, and seemed to do a booming business. 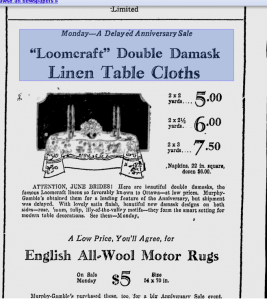 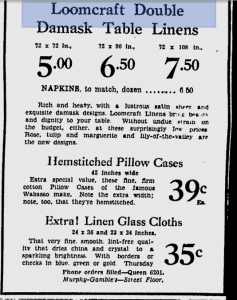 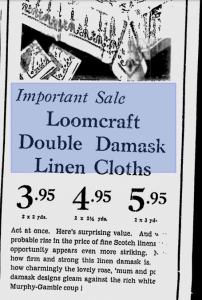 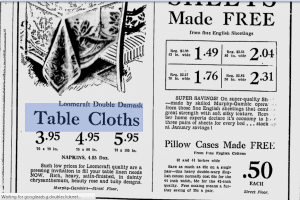 By 1940, Europe was at war.  All linen was needed for the war effort.  Linen is stronger when wet and the British Navy had an insatiable need for linen and hemp ropes.  After the war ended in 1945, wages rose, and linen could no longer be manufactured as cheaply.  Further, the advent of plastics, polyesters, and rayons that were invented during the war, made linen obsolete and exquisitely expensive.  Once again linen was priced beyond the means of the middle classes.  While the newer, man-made fabrics, that did not need ironing, pushed linen aside in the households of the middle class.

My find was a 70 x 88 inch table cloth and a strip of 8 20 x 20 napkins folded and in their original box.  These two pieces of linen fabric are not hemstitched, although there is a selvage on two sides, requiring only 2 sides to be hem stitched.  The napkins were originally sold in a strip of 12 napkins, therefore the bride had hemstitched 4 of the napkins herself.  The advertisements by Murphy-Gambles show that the size of the tablecloths changed from 2 x 2 1/2 yards to 72 inches by 90 inches in 1934.  Then by 1939 the size was reduced to 70 x 88 inches, the size of my table cloth.  In 1939 only 3 motifs are advertised and my table cloth and napkins are in the chrysanthemum design.

More pictures showing the shimmer and shine of the Damask.  The weave structure, done in satin weave, shows mirror images of the design on each side.

The napkins are a scaled down version of the table cloth design and are woven in double damask.

By 1940 these gorgeous linens were no longer being manufactured, as all linen grown in Great Britain was commandeered for the war effort and rationing was instituted, both in Great Britain and in Canada.  The cloth glows and shimmers.  Still starched, you can feel the weight and quality of the cloth.  I was originally thinking that I would like to turn this yardage into a garment, but Sarah, has veteo’d that idea.  She is excited as I am about our antique linen find.

Those who came to the Linen Festival at Joybilee Farm got to view this exquisite linen first hand.