Here’s what you need to know about bunny colour genetics to keep your angora colours strong in your litters, while still breeding for the choicest colours in your French Angora rabbits. 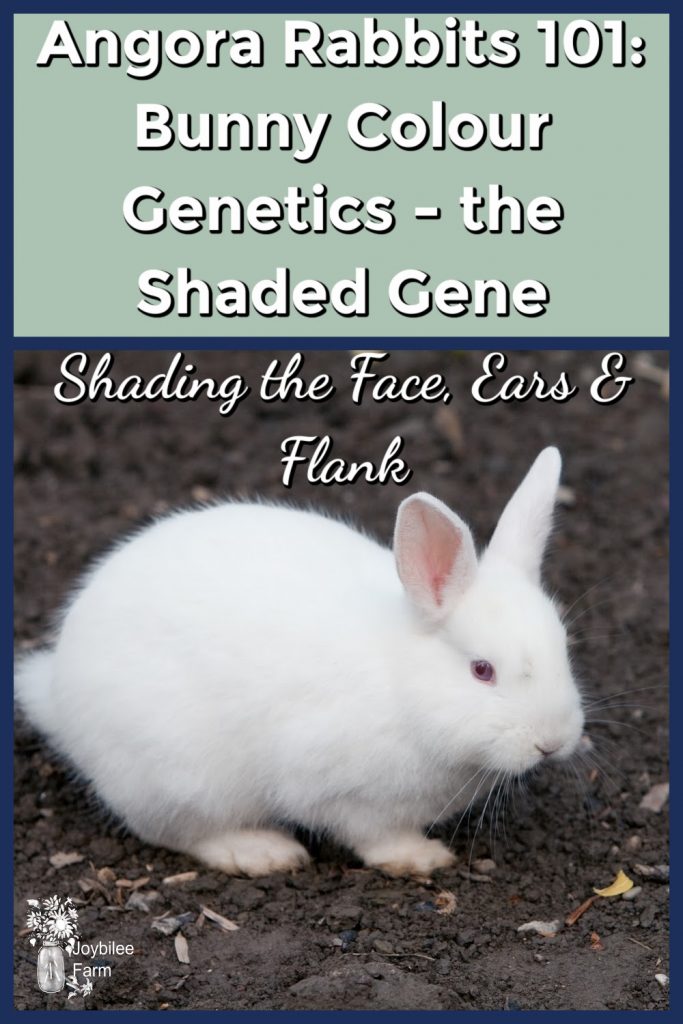 The dominant genes in Bunny DNA are:

These dominant colour genes also have a respective recessive gene.  These are notated with a lower case letter, to show that they are recessive to a matching dominant gene.

cc- albino (There are several c recessive genes, more about that later)

Every bunny receives two colour modifiers for A through E, one contributed from each parent.  However, only the dominant modifier will be expressed, although the bunny may pass on the recessive gene to its offspring.

To put this in perspective, a black bunny (self) has the genetics:

It is nonagouti, Black, with full colour saturation, with non-diluted colour, and with colour that goes down the hair shaft.

A chestnut rabbit is a black rabbit with Agouti dominant.  Its phenotype looks like this:

A chocolate self rabbit has no agouti gene and has a recessive Black gene, which is expressed as chocolate colouring.  Its phenotype looks like this:

Now, lilac is the dilute gene of a chocolate bunny.  So a lilac self rabbit would have a similar phenotype to a chocolate rabbit but with the recessive dilute gene.  It will look like this:

The E gene is responsible for whether the bunny shows as a black or chocolate rabbit or as a fawn or torte rabbit.  The recessive ee genetic marker gives the rabbit a golden or orange fur colour, in spite of his other genetic markers.  It is considered a shaded gene because rabbits that carry this gene will have shading on the face, ears, and flank.  The shading is usually of the colour expressed by both the Bb and the Dd — genes.  Tortoiseshell Bunnies are self bunnies with the recessive ee shading gene marker.

Tortes can be Tortoise Shell (aa, B_, C_, D_, ee), Chocolate Torte (aa, bb, C_, D_, ee), Blue Torte (aa, B_, C, dd, ee), or Lilac Torte (aa, bb, C_, dd, ee), depending on their individual phenotype.  The phenotype is the expression of all colour gene markers in an individual rabbit.  Recessive genes are known, but since dominant genes are visible and mask the paired recessive gene, one cannot know what the other gene is, in a gene pair, until the bunny has offspring.

When a Tortoiseshell is bred to a self rabbit, think of the Tortoiseshell rabbit as being genetically a black rabbit.  Breeding of a Tortoiseshell (aa, B_, C_, D_, ee) with a Lilac self rabbit (aa, bb, C_, dd, E_) will give Black, chocolate, blue, lilac, and tortes of each of these colours).  Of course, every litter will be different.  Each parent will contribute 1 gene in each of the Gene markers.  There will be no agoutis in the litter.

A fawn rabbit is an agouti rabbit, with the black colour genetics and the shaded ee gene marker.  Its phenotype looks like this: (A_, B_, C_, D_, ee).  When bred with a self rabbit, at least half the babies will have the agouti gene.  When a fawn rabbit is bred with a torte, 100% of the offspring will be either fawn or torte.  The recessive ee genetic marker will turn the coats of all the offspring orange, with the shading of the Bb colour on the face, ears and flank.   Since the fawn rabbit has the same B gene marker as a Black rabbit, a pairing of a fawn with a self rabbit such as a lilac rabbit (aa, bb, C_, dd, E_) may give black, blue, lilac, and chocolate self, chestnut, chocolate agouti, opal, or copper, as well as fawn, and tortoiseshell, chocolate torte, blue torte, or lilac torte.  It’s good breeding if you are trying to expand the colour choices in your rabbitry, for your own spinning pleasure.  Fawn and Torte are some of my favourite colours to spin and use in knitting or weaving projects.  The yarn is a creamy colour but the halo is reddish-orange and looks stunning with autumn complexions.

Regardless of the bunny colour genetics, the resulting yarn from all these rabbits will fall into one of four basic colours:  white from a Ruby Eyed White rabbit, Cream/Orange from a torte or fawn rabbit, cool grey, or warm grey.

The other colour that the E gene marker expresses is steel colouring.  Always seen in conjunction with an agouti gene (A_), this causes the colour on the hair shaft to be ticked with tan or silver. It is written as EsE on the phenotype.  Those bunnies ticked with silver also carry the chinchilla genetics on the C marker, expressed as cchd.   So putting it all together, a silver steel rabbit has the phenotype:  A_, B_, cchd, D_, EsE – -this tells you it is an agouti rabbit, black, with the chinchilla gene, non-diluted colour, and steel shading.

Now let’s look a little closer at the C_ genetic marker.  This is the marker responsible for full colour saturation.  This is the most complex of the genetic colour markers on rabbits.  It expresses where and how much colour is expressed on an individual rabbit.  There are 5 different sets of C or c genes possible in rabbit phenotypes.  Listed in order of dominance they are C_  for full colour saturation; cchd for chinchilla markings, as in the above steel rabbit; cchl or sable shading, which is also called light chinchilla; ch which is the Himalayan shading of tipped ears, a face mask, and tipped paws — much like a Siamese cat, and cc which is a complete absence of colour as seen in albino rabbits.

The sable shading, cchl, show up exclusively in nonagouti rabbits.  Also called “light chinchilla, ” it shows up as a dark shading over an already dark coat in sable rabbits (aa, bb, cchl_, D_, E_) or dark sable rabbits (aa, B_, cchl_, D_, E_).  Pearl rabbits also express the sable shading.  These rabbits are exquisitely beautiful with their shading in 3 shades of grey over their bodies.  Smoke Pearl (aa, B_, cchl_, dd, E_) have guard hair over back and normal furred areas in dark smokey blue.  Wool on the head, ears, feet, the upper side of the tail, and back is medium smoky blue, shading to lighter pearl grey beige on chest, flanks, belly, and underside of tail.

Rabbits carrying the sable shading can be seen in the reddish cast of their eyes when a glint of light shines on them.  Sable rabbits will often appear to change colour from 2 to 4 weeks and growing to their adult coat.  It is not unusual for a sable rabbit to appear as a blue rabbit in the nest box, only to mature to an almost black coat in adulthood, but genetically the rabbits are different from a black rabbit, and this will be seen in their offspring.

The ch marker is the Himalayan marker which makes a white rabbit with colour markings on the points of black, blue, chocolate, or lilac.  These rabbits, like albinos, always have red eyes.  Also called pointed white, they have the same genetics as a self bunny, but with the ch_, marker in the C colour genetic spot.  So a Black pointed white will have the phenotype:  aa, B_, ch_, D_, E_.

The final C colour saturation marker is the most recessive, the cc marker or albino gene.  The albino gene masks all other genes that the bunny is carrying.  So all albino rabbits have the phenotype:  _ _, _ _, cc, _ _, _ _.  When two albino rabbits or Ruby Eyed White rabbits are bred together 100%  of the offspring will be ruby-eyed white.  The other genetic colour markers are masked by the albino gene and one cannot tell what these bunnies are carrying unless one has access to their pedigree, which will give a hint.  Breeding an albino rabbit to a self rabbit will give you a better idea of their complete genotype.  I had an albino male whose background was a mystery.  Although I had a pedigree for this rabbit, and I owned his mother a REW bunny, she came to me already bred.  Once I began to use him for breeding, I discovered that he carried the spotted gene (Enen).  This was a bonus to my breeding program, as my spotted female was older and had stopped bearing.  I was hoping to expand the spotted genetics.  More about that in the next instalment.

This is part of a series of posts on Angora Rabbits 101:

Part 4 – Breeding for colour:  Understanding Colour Genetics:  The self rabbit