What’s with my bread?

The basic principles of working with wheat flour and how to improve your baking. 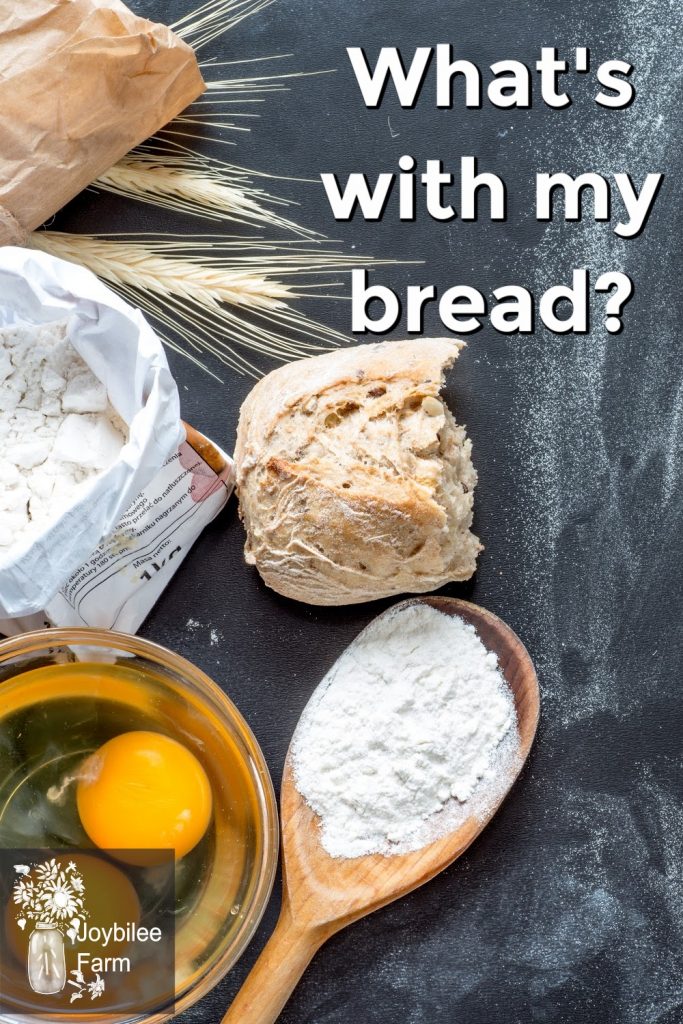 Day 5 of our 30 days of cooking from scratch challenge.

We’ve all had it happen.  You have a recipe that always turns out, whether it’s pastry crust or whole wheat bread.   Then one day, you do everything you’ve always done and it fails.  The pie crust is like lead or the bread is only half as high and the bottom crumb is dense and rubbery raw.  Don’t despair that you’ve lost your touch.  It may be the wheat flour.

What you need to understand about wheat: 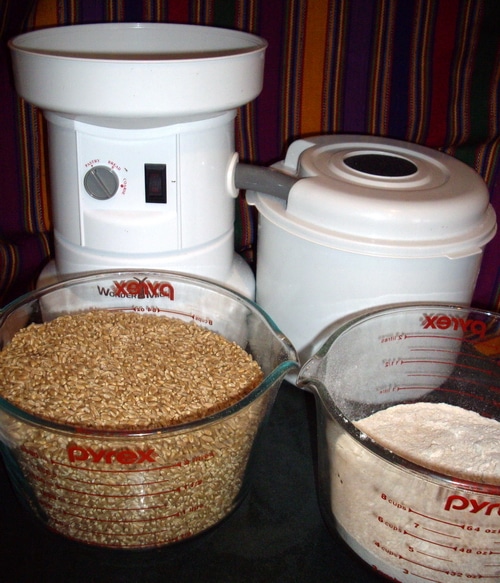 There are several kinds of wheat.  Wheat that is higher in gluten content is “hard” wheat or “winter” wheat.  It is usually planted in the fall and overwintered in the field, under a snow cover.  In the spring, winter wheat sends up fresh green shoots as soon as the snow recedes and the ground thaws.  This wheat matures in the middle of summer.  The high gluten content of winter wheat makes it ideal for bread baking and pasta making, but it’s not what you want for pastry or cakes.

Bread flours and semolina flours are high in gluten and come from hard winter wheat.  They are the best kind of flour to use for pasta making and bread baking.  The amount of gluten protein in these flours is affected by the growing conditions, and surprisingly, somewhat higher when grown without supplemental irrigation.  So you may find that your hard winter wheat is exceptionally good for bread baking one year, and not quite so good another year.

Pastry flour or cake flour are from varieties of wheat that are sown in Spring and mature in August and September.  These are  “soft wheat”.  They are lower in gluten and lower in protein.  This is ideal for baking pastries, cookies, and cakes, where a tender crumb, and flakiness are desirable.  Cake flour is a finer grind than pastry flour.

All-purpose flour, unbleached flour, and whole wheat flour can be either high gluten or low gluten, depending on where the wheat was grown.  Western Canadian milled flours usually are of the high gluten wheat, whereas flour in the USA or Eastern Canada is generally milled from softer wheat, with lower gluten content.  To confuse matters, your particular brand of all-purpose flour may source from the cheapest supplier, and it may not be the closest.  So when using all-purpose flour for bread baking, many recipes suggest adding additional “vital gluten” to the recipe to ensure that your bread will rise.

Some flours are bromated or bleached.  This is a chemical treatment to whiten the flour and condition it.  The chlorine or bromine used in the process remains in trace amounts in the flour.  It is absorbed in the thyroid, as it mimics iodine.  Bromated flour has been banned in Canada.

Hard wheat is heavier than soft what and so if you are weighing your flour rather than measuring by dry measure, high gluten flour has less flour per pound than soft, lower gluten wheat.

Graham flour is the whole wheat flour including the wheat germ.  This flour is best if processed fresh, as needed from whole wheat berries, at home.  The wheat germ is subject to rancidity and will give the flour an off, bitter taste if it is not fresh.  It is named after Dr. Graham, who first advised eating whole grains as a way to improve health.  If you grind your own wheat at home using a grain mill, you will be using graham flour in your baking.  Commercial graham crackers are usually made from whole wheat flour.

Whole Wheat flour is similar to graham flour but the germ of the wheat has been removed to protect the flour from rancidity.

Vital gluten is an extracted wheat flour from hard winter wheat that is used to improve the rising and lightness of bread made with all-purpose flour.  Vital gluten has the starch removed from the wheat flour so that it is 75% gluten protein.  You actually can make it at home but the process isn’t worth the time.  You don’t need vital gluten if you are using hard winter wheat for your bread.  Vital gluten is only used in bread making to give the bread extra strength for rising.  It will improve the lightness and texture of your bread if you are baking with All-Purpose Flour.  A little vital gluten goes a long way.  Use 1 tbsp. per every 2 or 3 cups of all-purpose flour in your recipe.  Vital gluten is available at health food stores, bulk food stores, and online. 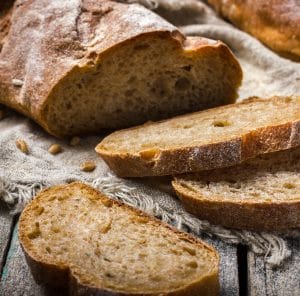 Many scratch cooks like to play with recipes.  In fact, most experienced cooks play with recipes according to what they have on hand when they are baking or cooking.  This is the JOY of understanding the principles behind cooking and baking. When you are working with wheat flour, understanding the basic principles will allow you to play with bread recipes, cake, and muffin recipes.  I’d advise making the recipe the very first time, exactly as the recipe is written so that you understand the method.  But once you’ve mastered the basics, take your freedom to play and have some creative fun in the kitchen.

Understanding Batters and Doughs made with wheat flour

Use of Leavening Agents

Making allowances for humidity levels in your kitchen

Flour naturally absorbs moisture from the air.  On days when the humidity in your kitchen is high, it will seem like you need more flour in your recipe to get the same texture in your dough that you are used to.  Adding a bit of extra flour is often fine.  The exception is when working with whole wheat flour.  Whole wheat bread is often heavier than white bread naturally.  Adding too much extra flour can make your bread heavy and inhibit the vital rising that you need to form a good crust.  Further, the resulting heavier loaves can end up not cooking all the way through and leaving a raw, rubbery, yeasty tasting centre to your loaf of bread.  One way to combat this is to knead your bread with wet hands instead of floured hands.  Wetting your hands before kneading, if you are working with whole wheat flour and high humidity, will keep the dough from sticking to your hands, while not increasing the heaviness of the bread.

Now that you understand the basic principles behind using wheat flour in baking, tomorrow we’ll look at a basic drop batter and how you can customize it to your family’s likes, and what you have on hand in your cupboards.

The Laurel’s Kitchen Bread Book: A Guide to Whole-Grain Breadmaking

The Laurel’s Kitchen Bread Book: A Guide to Whole-Grain Breadmaking

The All-New All Purpose: Joy of Cooking

Artisan Bread in Five Minutes A Day: The Discovery the Revolutionizes Home Baking

Artisan Bread in Five Minutes a Day: The Discovery That Revolutionizes Home Baking

Previous Post: « Avoiding Genetically Modified Ingredients – #30fromscratch Day 4
Next Post: Muffins from scratch — secrets to making it work with what you have on hand »