Its Day 4 of the 30 Days of Cooking from Scratch Challenge and today I want to talk to you about genetically modified food or GMOs.  Some of you are well aware of the dangers of Genetically Modified food, and were 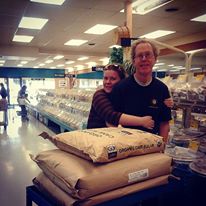 participants in the Worldwide March Against Monsanto that took place a week ago.  Others of you are just now becoming aware of the dangers that lurk in your supermarkets, where 80% of the food sold contains at least one genetically modified ingredient.   In fact, feed mills and food processors say that its now impossible to guarantee that any boxed food is actually 100% GMO-free.  Last week the FDA found GM contamination in a wheat field in Oregon.  GM Wheat has never been approved for planting and so this contamination is alarming.  As a result, Europe has closed its borders to American wheat — a costly proposition for American commodity farmers.

In 1996 nobody had ever heard of genetically modified food.  The patent owners had not yet made war on farmers by contaminating fields with GM seeds or pollen, and then prosecuting farmers to drive their patent rights before the courts.  Within a few years the farming communities around the world had polarized and the victims had lost their farms to legal fees and their crops to the patent owner.  I heard Percy Schmeizer, a Canadian Farmer that was taken to the Supreme Court of Canada by Monsanto,  speak in Grand Forks 4 years ago and his message changed me.

In 1996, I lived in the Fraser Valley of BC.  The dairy farmers were growing GM maize to feed their cattle.  The crop was experimental.  It wasn’t an approved crop.  All over the fields there were warning signs that the corn was not safe for human consumption.  At that time the GM corn crop was being fed to dairy cows.  The milk from those cows was pooled milk that was collected and shipped to the Dairyland processing plants and cheese factories in BC.  It was at that time that my toddler daughter was diagnosed with cow’s milk allergies and we switched to goat’s milk and started on our path to Joybilee Farm.  Is there a connection?  I can’t say.  Is there a connection to the huge rise in food allergies since 1997 and the commercialization of GM corn, soy, and other commodity crops?  We may never know, because, at least in North America, if you want to test GM food for anything, as a scientist, you have to go through the patent owner.  They own the seeds from the time of planting until its pooped out at the other end of the consumer.   If the GM gene is still in the poop, they might even own that.

What we know about GM ingredients

What we do know is that the GM gene is active inside the consumer – it isn’t destroyed by stomach acid, as was once reported by the patent owner.  This active transmuted gene changes the DNA of the consumer’s cells at the cellular level.  Biological products like breast milk and eggs, contain the transmuted gene, too, if the consumer is fed GM products.  Consider the implications.

The 30 days of Cooking from Scratch Challenge

Our goal in the 30 day cooking from scratch challenge isn’t simply to make processed food at home from scratch, but rather to change what we eat to be more healthy, and to avoid genetically modified ingredients that have been shown to damage DNA and cause cancer in animals.

Avoiding GMO foods isn’t as simple as only buying organic, because GMOs will cross pollinate with nonGM plant varieties and contaminate the gene pool.  Once the contamination occurs it can’t be taken back.  Organic farms normally will not be tested for GM contamination; because of the expensive repercussions should GM genes be found in the seed stock.  Contamination can also occur during transport, and at grain mills and other distribution channels.  So while we might not be able to completely avoid GMOs in our diet, we can make a good effort to minimize them by avoiding common ingredients known to be genetically modified.

Here is a list of the common ingredients that you will find on your processed food labels that will most likely be GMOs.

Corn and its derivatives:

Soy and its derivatives

Cotton and its derivatives

Canola and its derivatives

Sugar Beets and their derivatives

(Cane sugar has not been genetically modified)

Other ingredients that may be genetically modified:

Wheat grown in the USA

Alfalfa grown in the USA

Flax grown in the USA

Potatoes grown in the USA

Tomatoes grown in the USA

Apples grown commercially in BC or Washington

Rice (look for nonGMO on the label)

Why are GMOs a problem?

Because genetically modified crops have been sown prior to 1997, the gene pool of other similar species has also been contaminated with GM genetics.  For instance Canola/rape crops have cross pollinated with wild mustard plants.  Once the genetics have escaped it is impossible to take them back.

If GM crops were benign, as many scientists believed at first, this would be a nonissue.  But animal feeding tests have shown that genetically modified foods cause cancer and infertility and affect the genetics of future generations.  In one study, rats fed GM soy had fertility problems.  The second generation had only 50% success in breeding.  The experiment ended in the 3rd generation, where 100% of the offspring were sterile.  Feeding experiments using GM corn, resulted in massive tumours in only a few months of feeding genetically modified corn.  BSE, a brain disease that affects cattle, officially blamed on the feeding of animal products to livestock, quite possibly was the result of feeding canola/rape seed meal to cattle in UK.  This practice continues in Canada, where BSE is still being found, although the feeding of animal products to livestock is illegal, but the feeding of canola seed meal is a common practice.  If you raise livestock check with your feed mill for the ingredients in your livestock feed.  Ditto for your dog and cat food.

An attempt is being made in many countries to completely destroy GM plantings by firing fields where crops are found to contain the genes of genetically modified plants.  It remains to be seen if this will be effective in eliminating GM crops from the environment.  Governments in the US and Canada are not motivated to try to eradicate GM plantings.  Nor are genetically modified ingredients labelled as such.  The onus is on the buyer to understand ingredient labels and take personal responsibility.  Don’t eat poison.  Learn to read labels and educate yourself about the threat that genetically modified food represents to humans, animals, and the environment.

Monsanto has become the Icon in the war against GM food, but they are not the only player

And be aware that Monsanto is not the only patent owner of genetically modified food.  While Monsanto has been painted as the only villain, other corporations are also in the genetic modification game, including Microsoft, a heavy supporter of GM food, Syngenta, another GM patent holder, and several pharmaceutical companies that have plant patents for GM plants that are growing drugs that can later be extracted.

For more information on Genetically Modified Foods watch the video “Genetic Roulette” – there will be a worldwide free online showing on June 15th.  Check out the website: www.responsibletechnology.org for viewing.

Previous Post: « 30 Days of Cooking From Scratch Challenge
Next Post: What’s with my bread? Basic principles of working with Wheat Flour »