Feed your livestock and critters like grandpa used to with GMO free seeds and grains, formulated to give your animals their protein needs. Supplement with mineral blends, browse, hay, and alfalfa for a fully rounded diet.

There is a huge misunderstanding among small farmers and homesteaders about animal feed.  Some think that because a feed is 100% vegetarian it is organic.  Some think that if an animal has access to pasture it is grass fed, no matter what else is on its menu.  Others think that certified organic means that no genetically modified ingredients were ever fed to it.

A few years ago I bought locally raised chicken, frozen and ready for my freezer, from a local farmer.  She claimed they were certified organic.  And because of this I payed a premium per lb.  at $5 per lb or around $30 per bird.  When she delivered the birds I questioned her about her feeding practices and was surprised to say the least.  This well meaning farmer was completely confused.  She had her meat chickens in a barn, so they weren’t pasture raised.  She did not have certified organic status for her farm.  Nor was she feeding her chickens with certified organic feed.  This farmer thought that the term “vegetarian” meant the same thing as certified organic.  She didn’t mean to mislead me.  She just didn’t understand or even care to become informed about the issue. 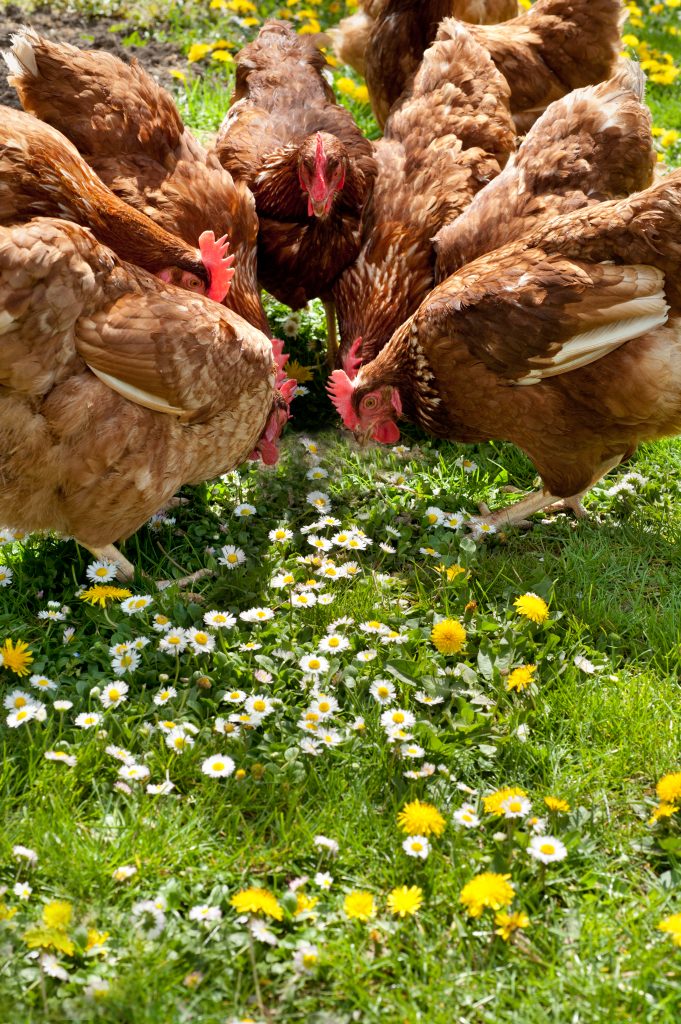 Another local farmer is raising pork.  While we had a discussion about GMO-free feed, he decided that his pigs were doing well on conventional pork rations and declined to switch to GMO-free.  This farmer has his pigs on pasture and supplements with conventional feed.  His pork is selling at the Kootenay Co-op, as “local organic pork”.  He isn’t certified organic.  Nor are his animals exclusively fed from pasture.  When I talked to the Co-op and mentioned that this farmer was raising his pork using conventional rations, they declined to discuss it.  What they don’t know they can’t be held accountable for.  I have a problem with this.  It is false advertising.  The people buying this pork believe it to be free of GMO ingredients.  This is a breach of trust, for the sake of profits.

If you contact a feed company, to inquire about the ingredients used in the feed that you are using on your livestock you will be told, as I was, that there is no such thing as GMO-free feed.  This is not true.

First they told us that feed was scientifically formulated and you couldn’t feed the same feed to all your livestock, no matter what the species.  This isn’t so.  Then they told us that the feed stocks were contaminated with GMO ingredients and it would be impossible, even with Certified Organic Feed to guarantee that it was GMO-free.  What?   This was a new angle.  This is what we learned:

While Certified Organic farmers do not knowingly plant GMO crops, there can be cross-contamination through pollination in the field, through residue at the storage facility and through residue in the trucks that transport seed to the mills or to the farm.  But if a farmer is certified organic, this contamination will never be tested for.   The cost of finding out the truth can be very great indeed.  So no tests are ever done.  Certified organic crops are not guaranteed to be GMO-free.

There are other crops that have been genetically modified but these are the ones that are generally used in livestock feed.   Many other crops are on the list for approval for GMO distribution but for now these are the big ones.  If you can avoid these in your feed, you will be ahead of the fight against GM ingredients.

Whatever an animal eats, that is what it uses to build its milk, eggs, and meat.  So if an animal is predominantly fed GM corn, than its protein tissue will be built out of corn (see the movie King Corn for more information on this).

While conventional wisdom will tell you that grass fed is best.  Ruminants were meant to be fed grass.   With the US alfalfa crop already contaminated substantially with GM alfalfa, grass fed may not guarantee a healthy, GMO free feed.  If you are growing your own hay, use grass that is rated for your climate zone.  Clover can be added to increase protein levels instead of alfalfa.  There are some issues with clover so it should be less than 50% of the hay.

GMO-free rations for your homestead

The feed formula that we use at Joybilee Farm, gives all our animals 15 to 16 % usable protein, and while we have had a slow down in egg production over conventional battery egg layers, we have seen improvement in the health of our livestock since switching feeds.

The last of our livestock to switch feed was our angora bunnies.  Our rabbit feed was 18% protein and according to the feed company contained canola meal, cotton seed meal, alfalfa meal, and soy bean meal as the predominant ingredients.  While we were feeding our GMO-free whole grains to the bunnies on weekends, we were afraid to switch them off their higher protein feed because of wool production and the well being of our babies.  Then we started having re-production problems.  Our bunnies stopped reproducing.  We would breed 5 rabbits and only 2 would give birth.  We started finding cancers in young rabbits, some less than two years old.  This really set off alarm bells.

We talked to the local livestock vet and asked if the rabbit feed could have something to do with it.  She said to take them off commercial feed.  GMO feeds, especially soy, have been implicated in scientific studies to cause reproductive problems in livestock.

So a year ago we took our rabbits off of their commercial rabbit feed completely.  The incidence of cancer deaths stopped immediately.  Older rabbits that we check out after butchering had cancerous tumours that were shrivelled, showing us that while they did have cancer, the change in feed reversed the condition and their immune systems were taking care of the cancers.  While we are a small farm and are not making any scientific claims, it is something that needs to be investigated.

I have several friends fighting the battle with cancer right now.  Some have already died.  None have been told to remove genetically modified food out of their lives.  The only diet advice these friends have received is to stop eating food that are rich in antioxidants, like blue berries, because it will stop the cancer treatments from working.  Huh?

The basis for all livestock feed should be grass hay or grass/pasture.  Grass hay and pasture was never a monoculture on traditional farms.   Fields were divided by hedge rows that were rich in herbs, trees, and shrubs that gave the animals what they needed at various stages of growth.  Don’t plow under the weeds and plant a monoculture of grass.  Instead encourage the wild grasses to grow by pasture rotation.   The pH of animal manure will change the pH of the soil gradually, encouraging the growth of grasses and discouraging weeds.

When supplements are needed, in winter, during gestation or early lactation, for instance, this is the feed that we use:

1 part whole or split peas, garbanzo beans or other pulse (not soy)

Keeping the grains whole ensures that the oils in the grain don’t go rancid.  Ruminants will digest the whole grains in their rumens.  Chickens need grit to digest these grains.  For young chicks and growing pullets we feed ground grains and increase the protein by soaking in milk or yogourt overnight before feeding it.

If you are concerned about pesticide and herbicide use you can go with certified organic ingredients.  If expense is a concern conventional ingredients will still give you GMO-free (not really as there can be contamination in the feed trucks and at the storage facility).  You can’t advertise this as GMO-free, but you can explain what you are doing to your customers.  Our customers appreciate knowing the rational behind our feeding decisions.

Using this as a basic guide, you can switch out ingredients to take advantage of price drops — sunflower seeds can be added to increase protein and vitamin E during early lactation.  The pulses can be switched out to home grown — If you don’t have a combine, most of us don’t, harvest while the seed is still immature, by taking the whole above ground plant and drying it as hay.  There may be some shattering of seed, but there is protein in the plants and the seed can be cleaned up by your chickens.

Field peas and desi garbanzo bean can be grown even if you get some summer frost.  These plants can withstand light frost.  If you have a warmer climate you can pick a bean that can withstand warmer temperatures during the growing season.

Vegetable supplementation for winter use

Don’t overlook vegetable supplementation for winter use.  Kale, beets, turnips, squash, and potatoes have all been used traditionally to feed cattle over the winter.  Potatoes should be cooked before feeding.  What did the farmer’s do 100 years ago, before factory farming took hold.  When you find that out you’ll know what you can do to feed your livestock without GMO food.

Minerals, both salt blocks and lose minerals, need to be added to this ration to allow the animals to get the correct minerals for their needs.  We have a three compartment mineral feeder in the goat/sheep barn that has baking soda, kelp meal, and lose mineral appropriate to the animals’ needs.  In the rabbit barn, each rabbit has a mineral wheel that they chew on.  The laying chickens receive oyster shell, grit and kelp meal.

We’ve been feeding this ration for 4 years now and have had no issues, except that our chickens lay fewer eggs in winter.  So if optimal egg production is important to you consider a higher protein feed.  Traditionally chicken feed was supplemented in winter with road kill, or varmint kills.  Chickens are omnivores not vegetarians.

What about feeding dogs and cats on the homestead?  More about that in the next article.

Previous Post: « Why You Should Grow Chickpeas and a Delicious Hummus Recipe
Next Post: The Night Sky »