Chick Peas or Garbanzo Beans are a traditional part of the Mediterranean and Indian diet.  They are rich in fiber, with 20% crude protein.  Sally Fallon in Nourishing Traditions says of the Garbanzo Bean,

“They are one of the most nutritious of all the legumes, high in calcium, phosphorus, and potassium.  They have an exceptionally high iron and vitamin C content and contain B complex as well.  Like all pulses, they are rich in essential fatty acids. However as Chick Peas are high in omega 6 fatty acids, they should not be consumed to excess.” Sally Fallon, p. 477.

Growing your own chick peas is easier in a cooler climate than growing other beans and their high protein content makes them a good choice for homestead self reliance.

Chick Peas or Garbanzo Beans are neither a pea nor a bean.  They are classed as legumes and are similar to vetch in growing patterns.   Chick peas are the world’s third most important pulse crop, after dried beans and peas, making up 20% of the world pulse production.  There are two main varieties of chick peas — the kabuli chick pea needs more warmth and a longer growing season and is the large, creamy coloured chick pea that is most commonly found in the grocery store, and in canned beans.  The Desi chick pea needs less heat, will germinate in cooler soils, and is matured sooner in the field.  The desi variety is the smaller, dark brown chick pea found in East Indian markets.  It is commonly used for chick pea flour and has a high oil content.

The kabuli chick pea takes 100 days from planting to harvest in an ideal climate.  It doesn’t take transplanting well, due to its long tap root.  It should be planted about 2 weeks before the expected last frost date in your zone — about May 1st in my area.  The Desi chickpea can be planted earlier, about the same time that I plant peas and linen/flax.   It is more frost hardy and matures sooner than Kabuli.  The chick peas are formed in pods that hold one to two seeds each. The plants begin to flower about 50 days after emergence.  Kabuli flowers are white, while desi flowers are purple to pink.  The plant looks similiar to vetch before flowering.  The plant does better in areas that have drought in the late summer, as the drought stress promotes maturity.

Seedlings will tolerate light spring frost, but frost damage on immature seeds (especially of kabuli chickpea) will prevent the seeds from turning the desirable golden colour. Chickpea is a relatively drought tolerant crop. The long taproot allows the chickpea plant to use water to a greater depth than other pulse crops. In the absence of disease, chickpea performs best when there is between 8 and 12 inches of rainfall during the growing season, and when cropped on soils that are well drained. — Saskatchewan Pulse Growers

Planting density is 4 plants per square foot.  A wider spacing can be detrimental by inhibiting maturity, so plant them close.  Keep them well weeded.  Don’t add nitrogen rich manure composts to the soil during growing, as this will encourage leaf formation to the detriment of seed formation.  Adding some ashes to the soil before planting will encourage flowering and fruiting.  Side dressing with finished compost at the time of flowering can increase yields.

Pick your peas once the leaves have turned brown.  Either allow the peas to dry on the plant or harvest the pods and continue drying under cover.

Once they are completely dry, store them in a jars as you would other dried beans. 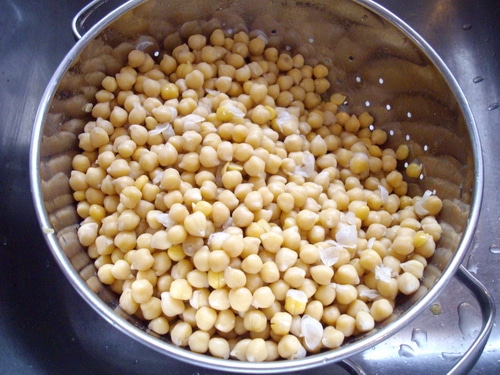 Chick Peas, like other seeds and beans contain phytates, anti-nutrients that discourage pests from consuming them.  Phytates or phytic acid combine with iron, calcium, phosphorus, and zinc in the intestinal tract so that these minerals cannot be absorbed.  Traditional societies usually soak or ferment their beans before eating them, a process that neutralizes the phytic acid.  Proper preparation techniques also help in the break down of complex sugars in legumes, making them more digestible.  For this reason, avoid canned chick peas and soak dried chick peas over night before cooking.  After soaking rinse them well, and with fresh water, cook them until they are almost soft.  Rinse again.  This should remove the majority of the phytates.

One further step is necessary in chick pea cooking.  The skins on the chick peas contain still more phytic acid.  Traditionally the skins were removed when the peas were almost cooked, but not quite.  Remove the skins by immersing the almost cooked peas in cold water.  While under water, rub the peas between your hands.  The skins will slip off and float just below the surface of the water, where they can be scooped away. 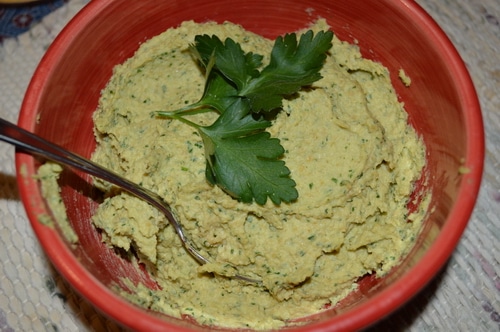 Blend garlic, beans, zest of 1 lemon, lemon juice in a food processor or blender, until smooth.  Add water from the cooked beans if necessary to get a smooth paste.  Add chopped green onions, parsley, or chives just before serving.

Serve with warm pita bread or crackers. I love eating this in a dish with a spoon.  Way better than peanut butter!

You can also enjoy chick peas as sprouts. Follow the directions in my article on sprouting to get successful sprouts from chick peas.

And the tender young leaves of spring plants can be added to salads and stir fries.  While it doesn’t make sense to grow chick peas in a container for dried pea production, growing them in a container for greens and sprouts is a very good way to enjoy them if you have limited space.  Young sprouts are rich in vitamins and enzymes.

In Mexico, chick peas are used as animal fodder.  Consider chick peas when mixing your own GMO free livestock protein supplement.  Chick peas have 20% crude protein.  Ruminants can do well both on the greens and on the seeds when mixed with other grains like wheat, oats, and barley.  The addition of flax seed or sunflower seed helps to balance the omega 3/6 ratio in the ration.

Nourishing Traditions: The Cookbook that Challenges Politically Correct Nutrition and the Diet Dictocrats