My friend called me on Thursday night and asked if I could use some fresh elderberries.  She had pruned all the berries off her elderberry bush and didn’t want to see them go to waste.  She was a little nervous about processing them herself because she read that they contained cyanide, a deadly poison. There are three, currently circulating, myths about the safety and efficiency of using elderberry for food and medicine. Check out the explanation behind these myths, and the safety protocols for working with elderberry. 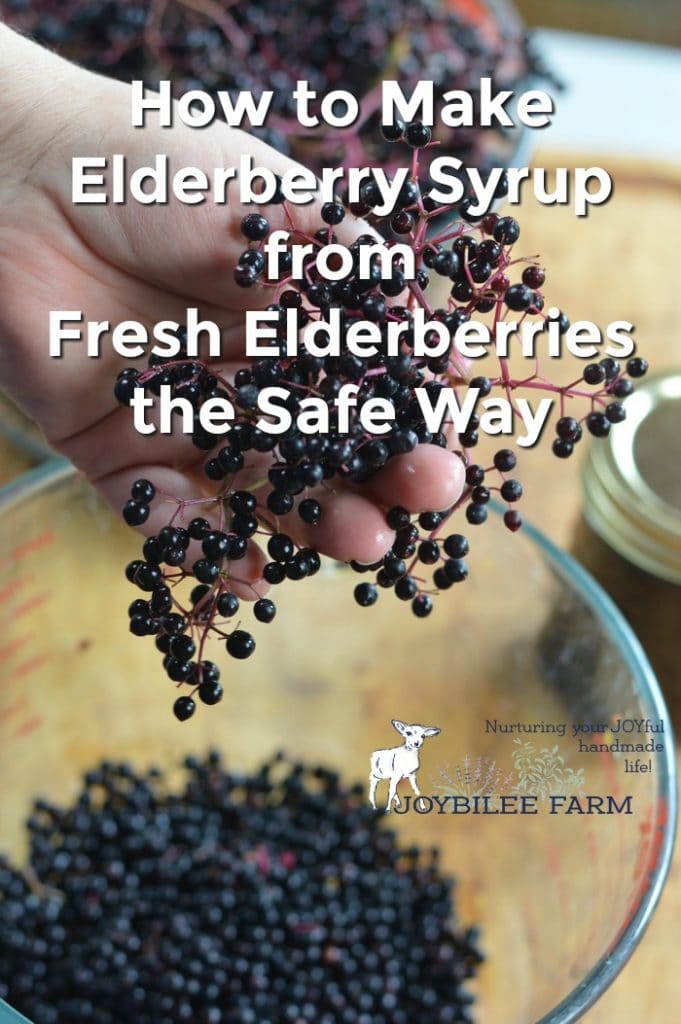 We brought home about 18 pounds of ripe elderberries from her single elderberry bush. I planned to make elderberry syrup from fresh elderberries. These elderberries are a special treasure this year.  You see last year there was a worldwide shortage of elderberries. Elderberries are a proven and effective antiviral herb. The flu season was already bad by January last year. There were so many people looking for elderberries that the herb suppliers ran out of stock and as soon as a new shipment of berries came in, they were immediately sold out again. 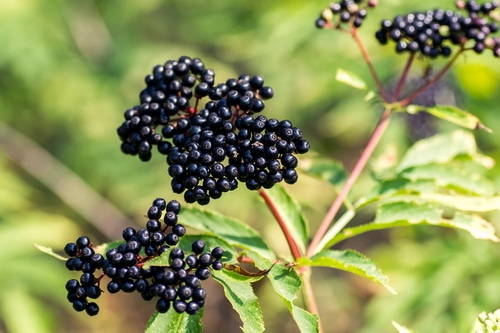 The elderberry shortage was so serious that friends were sending other friends dried berries from their personal stash, hoping that their own family would stay healthy. I’ve had dried elderberries on an alert with Mountain Rose Herbs for months. I’m still waiting. Finally, last week I gave in and tried this supplier of wild elderberries from the Alps, on Amazon.  The bag is sitting in my mailbox at the UPS station waiting for me to pick it up.  The day after my parcel arrived at the UPS depot I got this phone call from my friend.

(Update: This supplier was excellent. The elderberries were overweight. The berries are fragrant, clean, and flavorful. I couldn’t ask for better quality. As of September 17, 2019, they are still in stock.)

If you are looking for a recipe for elderberry syrup from dried elderberries try this one. 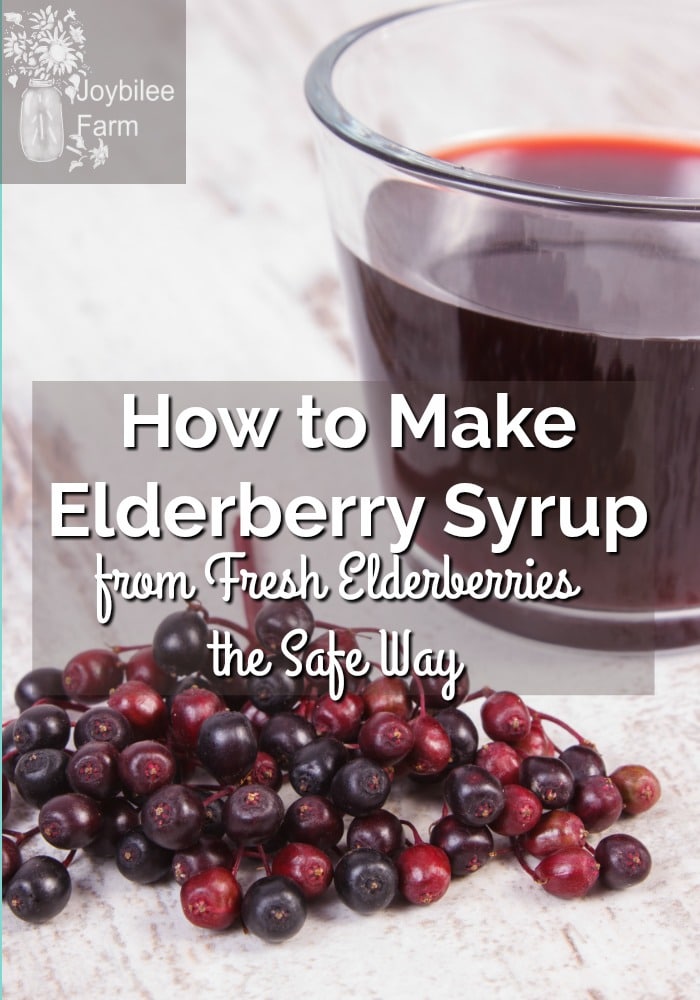 Elderberries (leaves, stems, and seeds) contain cyanogenic glycosides which are toxic but rendered harmless through heat. You’ve probably encountered other plants that also contain these cyanide compounds like apple seeds, grape seeds, bitter almonds, apricot and peach pits, for instance.  It’s the same ingredient as Amygdalin, the cyanide compound found in bitter almonds.  When ingested in small amounts these compounds are naturally excreted by the liver and kidneys and pose no concern for healthy people.

A tincture made with dried berries that have not been heat-treated could pose a danger to young children, the elderly, or those with liver disease. However, fermentation at 30 to 40 C (86 to 105F), as when making elderberry wine or elderberry vinegar, will also render the cyanide harmless.

When making elderberry syrup from fresh elderberries, always remove the stems first. (Hint: Freeze the berries on the stems first. Then take the bags of frozen berries and whack them on a counter or table. The berries will fall from the stem easily)

Simmer the berries in water OR extract the juice with a steam juicer.  When heat processed, elderberries will not contain any cyanide compounds.  These will be evaporated out of the berries by the heat treatment. 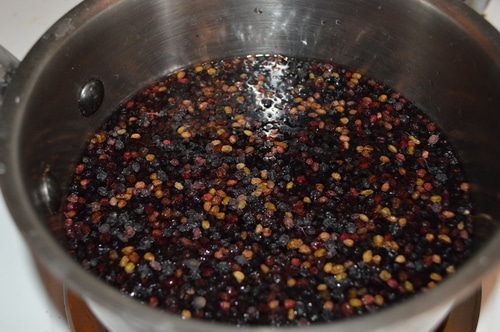 How to use a steam juicer to extract elderberry juice 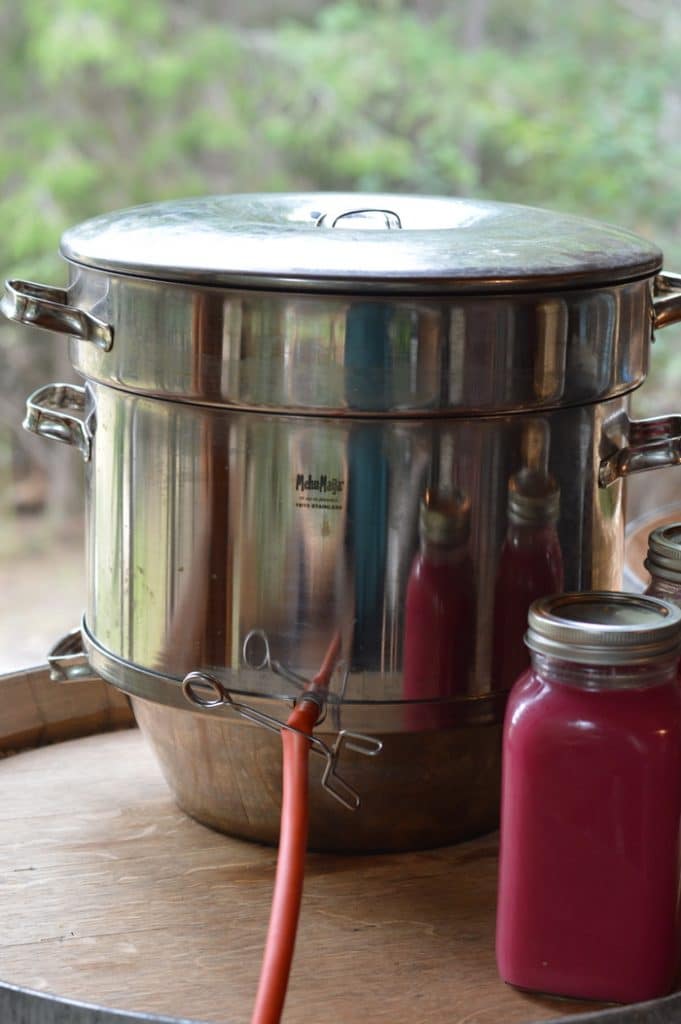 The steam juicer works by steaming the berries in the top layer until their tissues break and the juice is released.

The juice trickles through the strainer holes and is caught in the second layer of the juicer.  This second layer has contact with the boiling water in the pan below.  Any juice caught in the middle pan is heated to pasteurization temperatures by the water below.  Juice from the steam juicer can be transferred to sterilized and heated glass jars or juice bottles and vacuum-sealed or processed in a boiling water bath canner for 10 minutes at sea level or 15 minutes above 1000 feet in elevation, for long-term, safe storage.

Elderberries that are juiced in a steam juicer have any cyanide in the berries evaporated out. The elderberry juice from the steam juicer is completely free of cyanide compounds and safe for consumption. 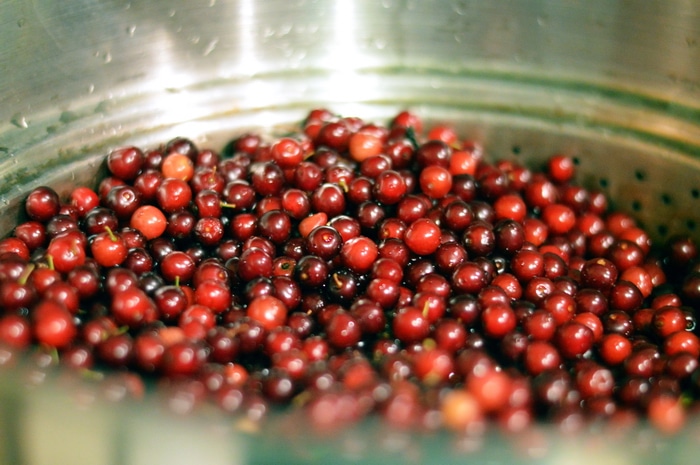 Elderberry syrup is effective as an antiviral.  Double-blind tests show that those who consume 1 tablespoon of elderberry syrup 4 times a day at the first sign of a cold or flu will lessen the duration and severity of the virus.  Elderberry effectively prevents viruses from replicating in the cells.

Here are just some of the benefits of elderberries.  To see their full benefits check out the elderberry materia media here.

A proven antiviral, steam juiced elderberries are safe and effective.  Gather them while they are in season and waterbath can the syrup to keep it for long term storage.

Use 1 tablespoon of elderberry syrup every 2 hours at the first sign of a cold.  Reduce the serving size to 1 teaspoon for children under 12. Children under 2 can be given 1/2 teaspoon safely.   Elderberry antioxidants enter the blood stream rapidly and are excreted within 2 hours of eating, so it is safe to take elderberries often.

This syrup can be used regularly as a food.

This recipe can be multiplied keeping the ratio of 1 cup of honey to 2 cups of reduced juice. 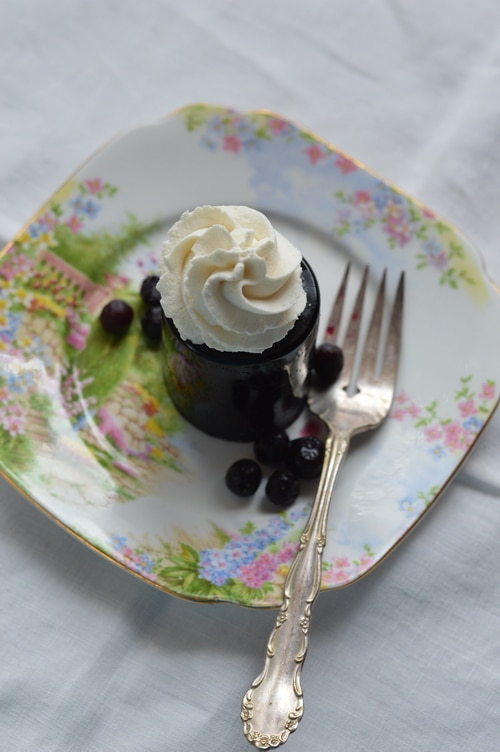 How to use elderberry syrup from fresh elderberries

Use it on pancakes, waffles, or toast

If you’ve got a lot of elderberries try some of these healthy ideas for preserving wild berries.

Previous Post: « 25 Healthy Apple Recipes that are NOT Apple Sauce
Next Post: Vegetable Noodles with Butter and Poppy Seeds »