In 2020, elderberry myths abound.  And every single myth surrounds the idea that elderberries will kill you.  But they won’t. Check out these myths and make sure these aren’t keeping you from enjoying the benefits of this safe and effective herbal remedy.

“Would you like some elderberries?” my friend asked.  She had just picked all the elderberries from her shrub — 18 pounds– but she didn’t use them herself.  Of course, to an herbalist these elderberries were “gold”.  I didn’t hesitate for a minute.  Then my friend asked the question so many ask.  Aren’t they poisonous? 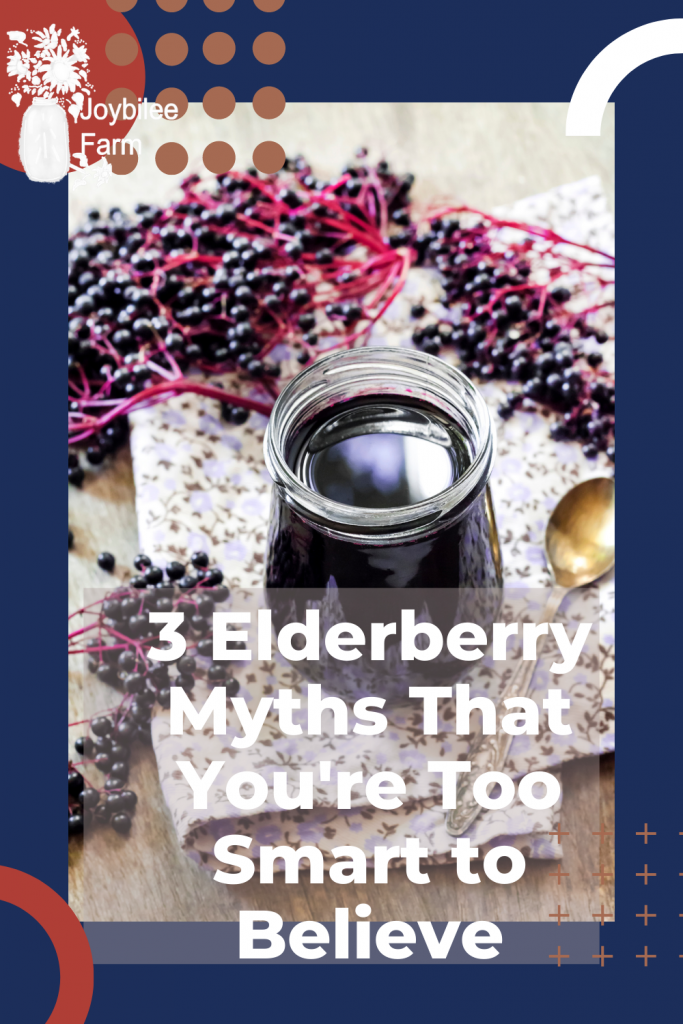 Elderberries are one of the most effective herbal remedies for supporting the body during cold and flu season.  They inhibit the replication of viruses in the body, and if you start taking elderberry every couple hours, at the first sign of a cold or flu you might even avoid getting sick all together.

It [elderberry syrup or cordial] shows the anti-flu activity by binding with viruses before penetrating into the walls of cells, thus prevents the spreading of viruses – (source)

The rule in herbalism is “early, often, and after”.  Take herbs early, every few hours, and keep taking herbs for a few days after you feel better.

Elderberries are anti-inflammatory, antiviral, and rich in antioxidants (that deep purple color is a give away.)  But for some reason, this inexpensive, and traditional remedy has faced some harsh criticism in 2020.

Let me debunk a few of these myths so you can feel confident in your DIY herbal remedy crafting this year and stock up your herbal remedies ahead of flu season.

Myth #1 — Elderberries are poisonous, eating them will kill you

When my friend asked if elderberries were poisonous, if I was shrewd, I would have told her, of course they are.  I would be rich in elderberries forever.  But instead I told her the truth,  “Slightly.”

Elderberries contain amygdalin, a cyanide-sugar molecule that in large amounts can cause diarrhea and stomachache.  In young children and those with compromised digestion large amounts might make them ill.

Learn how to make safe and effective elderberry syrup from fresh elderberries here.

Elderberry Myth No. 2 — Elderberries will kill you by causing a cytokine storm

In the Spanish flu of 1918, healthy young adults died and it was reported that the reason so many died was because their healthy bodies had an overactive immune response and produced too many cytokines.  They drowned in their own immune fluids.

A study that tested the benefits of elderberries in vitro (in a lab dish) showed that elderberries inhibited viruses by causing a cytokine induced immune response.

These are one of the ways the immune system communicates with the cells in the body.  Think of them as messenger proteins. The cytokine sees a problem and signals for the immune system to send over some antibodies to fix the problem.

One herbalist saw this study and extrapolated that the issue with the Spanish flu and this process found in a petri dish were the same thing and warned her readers that elderberry was too dangerous an herb to use during a pandemic.  There was only one problem.

Her conclusion didn’t take into account the full and balanced action of elderberries.  Elderberries are anti-inflammatory and antioxidant as well as immune modulating and would likely calm down the situation, if taken early in the illness.  Elderberries are also a rich source of quercetin, an antioxidant that acts as a zinc ionophore, in a similar manner to hydrochloroquine.

Other herbalists stepped in and brought scientific balance to the discussion but not before this myth ran like wildfire over the inter-webs.  Elderberry is safe for most people if taken early, often, and after.

Myth number 3 — Elderberry will kill you if you try to can it, jam it, jelly it or process it

A 2015 study that looked at elderberry cultivars specifically to use for the herbal supplement industry,  indicated that some selected elderberry varieties when grown in 2004 – 2006 in orchards in Oregon and Missouri are showing pH values higher than 4.6, the arbitrary boundary between low acid and high acid fruit, for home canning purposes.   The elderberries in question were grown in limed soil and the pH values of different varieties fluctuated depending on the growing season and the area they were grown by as much as .5 pH.

This summer, a university extension office dug up this study originally done in 2006, and sounded the alarm stating dogmatically that elderberries could not be canned using a water bath canner — not with added acid like tomatoes, and not with added sugar like jams and jellies.  Their conclusion — leave them for the birds.  Elderberries are just too dangerous to process at home.

By treating elderberries like we treat tomatoes for water bath canning, by adding citric acid or lemon juice, we can safely lower the pH to make them safe for water bath canning.  Or use a pressure canner and process them as you would for tomato juice, according to the manufacturers directions.

You can also safely freeze elderberries or elderberry syrup for winter use.

Elderberries are a safe and effective remedy to keep in your home apothecary.  Don’t let these internet myths keep you from making this effective and safe herbal remedy at home.

(September 20 to October 31st).  Tap the button below to find out more.