Before there was Gatorade™ there was Switchel. Switchel is the original electrolyte drink, rich in glucose, potassium, sodium, and vitamins. Before the industrialized food system, our ancestors made homemade sports drinks to keep their energy up for their high intensity workouts in the haying fields. Switchel is what children were given, when they were burning up with fever, too. Making homemade sports drinks and electrolyte drinks like switchel is one of the lost arts of homesteading. 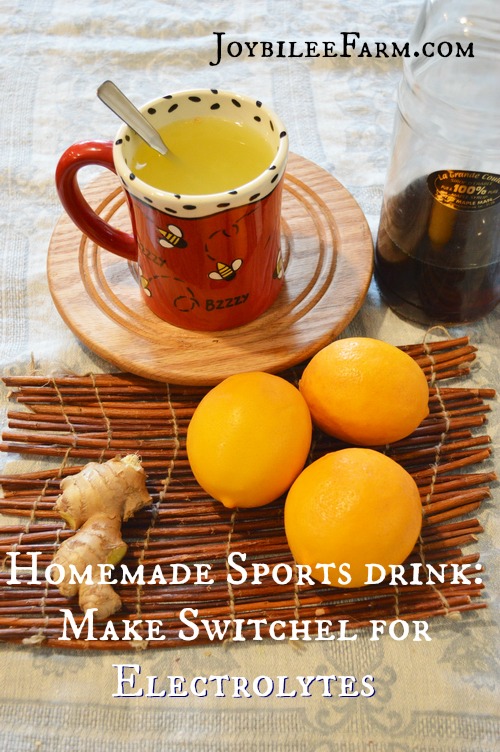 Switchel is  a warming electrolyte rich drink for those cool mornings when you need a little pick me up. It’s caffeine free and will boost your energy levels as well as it warms your insides. Alternatively, you can make this with cold water and put it in your water bottle to drink during your workout or while you do errands.

So don’t grab a sports drink, high in unhealthy high fructose corn syrup and chemicals. (See the nutritional analysis of Gatorade here.) Make a glass of switchel instead. This recipe is warming. If you want it for a hot afternoon, just use cold water instead of hot.

Homemade sports drinks need sodium, potassium, calcium, and glucose to replenish the electrolytes lost through sweating or fever. Generally they had a tart taste from lemons, rhubarb, or apple cider vinegar. I had some fresh meyer lemons from a friend in Texas so I used lemons in this recipe. You could use apple cider vinegar instead, or lime juice, or even rhubarb juice. The tartness of the juice and the extra potassium that the fruit offers are what makes this thirst quenching.

I included fresh ginger in my homemade sports drink recipe for its warming and throat soothing qualities. But rather than grate the ginger and have to strain it out of the switchel before serving, I cut it into quarters and pressed it with my garlic press, just using the juice. Juicing the ginger is fast if you have a steel garlic press.

This switchel is very warming and not unpleasant to drink. It’s also full of immune boosting and nutritious herbal goodness.

This recipe is my adaptation of a switchel recipe in the Intermediate Herbal Course at the Herbal Academy of New England.

1 cup of hot water, not boiling

1- 3 teaspoons of maple syrup, to taste

1 inch piece of raw organic ginger, pressed juice only (use a garlic press)

Squeeze the juice from one lemon. Put it into a mug. Pour hot water over the lemon juice. Squeeze the raw ginger juice directly into the mug. Add a pinch of salt and 1 to 3 tsp. of maple syrup, to taste.

The glucose from the maple syrup is important to your electrolyte balance. It is also rich in minerals like calcium, potassium, iron, zinc, magnesium, and manganese. Check out the nutritional facts for maple syrup and you’ll see that there is no substitute for the real thing, not even honey.  Don’t be tempted to replace this with artificial sweetener. If you are watching carbs, just use less maple syrup.

Drink this to replenish electrolytes when you need an extra boost, whether because of sickness, exercise, or dehydration.

So next time you are tempted to grab a Sports Drink to quench your thirst and replenish your electrolytes, make this homemade sports drink, switchel, instead and feed your body herbal goodness that actually nourishes your body and gives it what it needs to perform at its best.