Make this St. Johns Wort tincture for spasming pain.  St. John’s wort is the medicinal herb to use for pain, especially shooting pain and nerve pain.  It eases pain and reduces inflammation quickly.  In many cases, it acts faster than OTC anti-inflammatories.  Use these guidelines to make St. John’s wort tincture, if you have the plant growing nearby.

Today I’d like to introduce you to one of my personal herbal allies.  I first met St. John’s wort in 1997, when I fired my psychiatrist.

I was diagnosed with severe postpartum depression in 1989, after 3 pregnancy losses.  8 years later, I had already had 3 rounds of electric shock therapy, but it only made me feel worse.  My young daughter was just 3 years old, and my body had started breaking down from the chemical storm the doctors wanted me to take for my “disorder”.  At just 92 pounds there was nothing the doctors had to offer me, but more shock therapy.  My body had quit digesting food.  My gut was so inflamed from the prescription drugs, they thought I had celiacs.  The drugs never worked. That was my “rock bottom”. 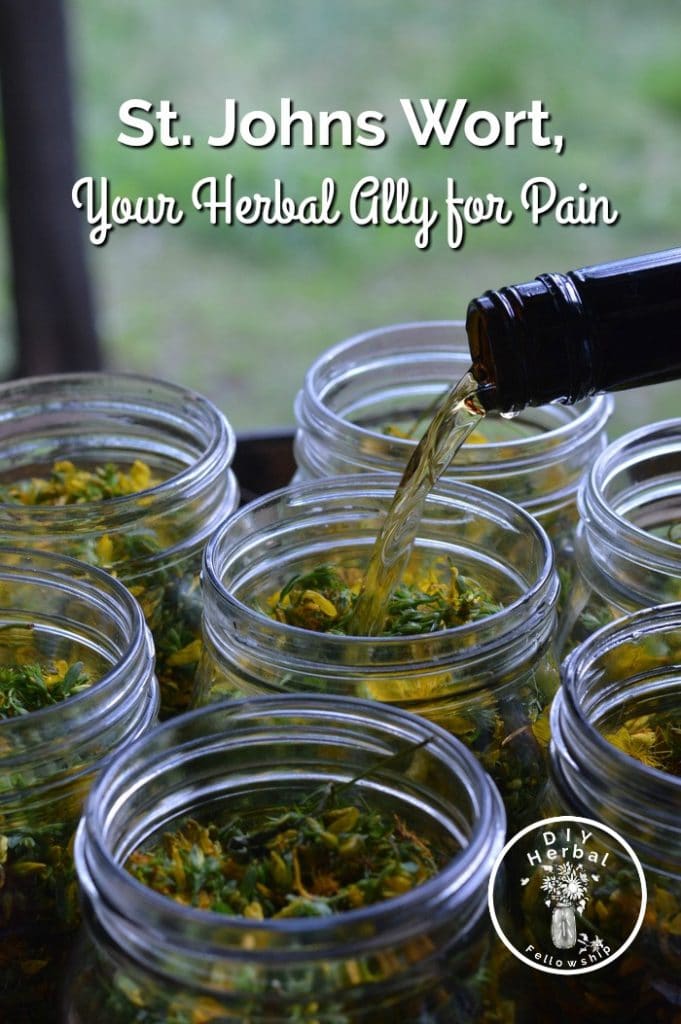 But then I met St. John’s wort.  St. John’s wort was my Knight in Shining Armor, My Batman.  I’ve never been back to the psychiatrist’s office.  I quit all the chemicals the doctors had me on with the support of a new doctor.

I learned about St. John’s wort from a book I found in a book store, by accident.  It talked about clinical trials they were doing using the herb to treat depression.  I ordered some seeds and started growing my own. In those days I didn’t even know if I could legally grow my own medicine, so I didn’t tell anyone.  Now more than 20 years later, I’ve never had another bout of depression.

I’ve learned that St. John’s wort is so much more than an anti-depressant herb. Yesterday was our annual St. John’s wort harvest.  We have a “secret” patch of St. John’s wort that we harvest from every year.  This year it was prime and in just 2 hours we were able to harvest enough St. John’s wort flowers to provide a year’s worth of both St John’s wort tincture and infused oil, a total of 7 quarts for our family.

But St. John’s wort is so much more than the anti-depressant herb.  It is nervine that relieves pain by correcting faulty nerve pathways and reducing inflammation.  Any time there is sudden pain, shooting pain, or stabbing pain that indicates that nerves are involved is a good time to reach for St. John’s wort tincture.  I’ve personally found it more reliable than OTC NSAID and Tylenol No. 3s for relief of lower back pain, neck pain, or joint pain.We’ve also used it with broken bones, where there is sharp pain.  Both as a tincture and as an infused oil to rub (gently) where the pain is.  Hospitals don’t set many broken bones now.  So using St. John’s wort oil is not impossible where there is no cast to interfere.  Robin found it very helpful when he broke his ribs while falling on the ice.St. John’s wort infused oil is also excellent as a carrier oil for salves along with calendula, plantain, comfrey, or any of the other skin supporting herbs. I use it in my herbal first aid salve.  The one my Daughter in Law calls, “The magic sauce“. St. John’s Wort tincture is sedating and can be useful for insomnia, especially where you wake up in the middle of the night and can’t get back to sleep.  For that reason, it’s better to take it in the evening rather than in the morning.

St. John’s wort tincture is an antibiotic for gram-positive bacteria and is traditionally used for wound care where there is a risk of infection.  Soldiers have used St. John’s wort on the battlefield since Alexander the Great, and possibly even earlier than that.  This herb is also antiviral, antispasmodic, pain-relieving.  It is useful for painful periods and for the shingles virus.

Some “authorities” report that St. John’s wort is poisonous to livestock and can cause sun toxicity.  We haven’t found that to be the case with sheep, llamas, and goats.  None of our animals have had any problems with St. John’s wort in the pasture with their normal grazing. Use caution though, if the pastures are poor and there are no other grazing plants. Also, we haven’t had any issues with sun toxicity, when using St. John’s Wort tincture or oils.  But we’re in Canada — so do use caution until you see how you personally react to it.

St. John’s wort is considered a noxious weed in some regions, so check with your local authority before you plant it. There is some concern with drug interactions with St. John’s wort taken internally.  Always check with your personal health professional if you are on prescription or OTC drugs and you plan to use St. John’s Wort tincture, as it’s one of the more active herbal remedies.

St. John’s wort grows in waste places, roadsides, and meadows in temperate climates. It is a perennial and will come back in the same spot year after year, expanding by underground runners and seeds.The plant grows 12 to 18 inches tall, with yellow flowers that have 5 petals.  The botanical name Hypericum perforatum reminds us that the leaves and flowers have small holes or perforations that hold red/purple active compounds.  As you harvest St. John’s wort flowers your fingers will take on this inky colour.  (It washes off easily with soap and water). You can see the dots on the leaves and petals in the photo below.

Only the St. John’s wort flowers and flower buds are used to make St. John’s wort tincture or St. John’s wort infused oil.  The flowers should be used fresh, if possible, for the most potent herbal remedy. Wilt them for 4 hours, then put them in a mason jar and pour 80 proof alcohol over them for a tincture.

Allow this to macerate in the jar in a sunny window for 30 to 45 days.  Shake as often as you think of it. (This is one time when the admonition to place in a cool, dry place, should be ignored. You’ll find that more medicinal benefit is extracted when St. John’s wort tincture is infused in sunlight). 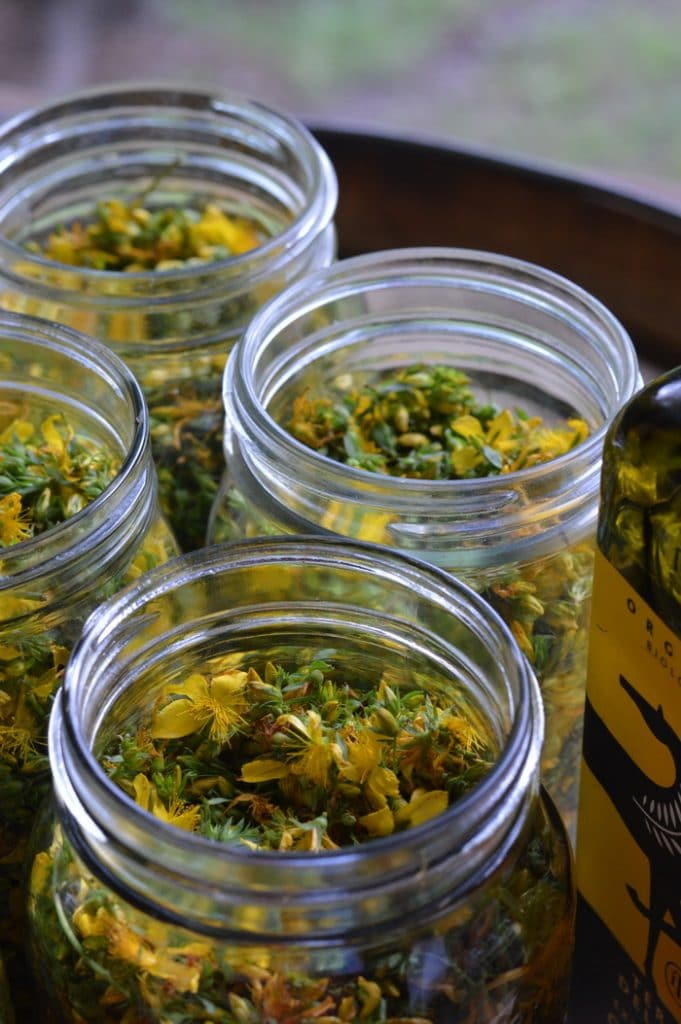 Strain and rebottle in sanitized bottles. Label and date.  Store in a cool, dark place.  To use: St. John’s wort tincture dose: 1/2 to 1 teaspoon up to 3 times a day for pain relief.  1 teaspoon at bedtime for relief of S.A.D.  Note if it makes you drowsy adjust the dosage accordingly.

While you are making your annual supply of St. John’s wort tincture, set aside a few jars for St. John’s Wort infused oil for pain, too.  You can make it at the same time.

In the comments below tell us what your experience is with St. John’s wort.  When do you reach for it most often?  Which herbal remedies do you make with it?

Previous Post: « How to Make St. Johns Wort Oil for Pain, Strains, and Spasms
Next Post: Bidens Can Help Fight Infections and Viruses: Get to Know Bidens »