On Monday, I invited you to join us for a virtual Passover meal to remember the appointed Spring Festival of the Lord, celebrated by Jewish people around the world and sometimes by Christians as well.  I wanted to share with you our Seder table and explain briefly the meaning behind each part of the meal.  I want to share with you my personal recipes, too.  I hope you enjoy this intimate time with my family in our Passover celebration, sharing our faith journey.

To find out more see Why’s a nice Christian like you celebrating Passover?

The Seder is the formal, symbolic part of the meal that explains the story of the Exodus so that the children can see and remember their ancestral journey to freedom.  Above all the Passover is a celebration of freedom from bondage and slavery.  There are 5 symbolic foods on the table but the family actually only eats 3 of them.  The others are a symbol and reminder of the cost of freedom and a future hope. 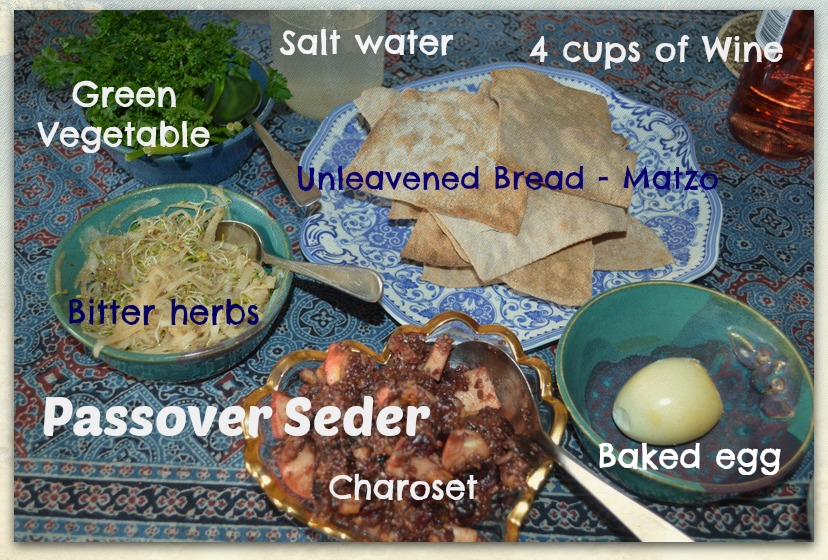 What’s on the table?

Going clockwise beginning at the bottom, the roasted egg symbolizes the Holy Temple in Jerusalem.  The Passover lamb was to be sacrifice at the Holy Temple.  The 2nd Temple was destroyed in 70AD by Titus and his army and so the Passover lamb is no longer sacrificed.  However scripture promises that Messiah will come and rebuild the Holy Temple for the 3rd time.  The egg is the reminder of not just the missing temple but the future rebuilding.

The charoset is an apple, nut, cinnamon relish that represents the mortar that the Israelites used to hold the bricks together when they built the pyramids in Egypt, during their 400 years of slavery.  It is a sweet relish, used to hold two pieces of unleavened bread together – eaten in remembrance of freedom.

Bitter Herbs are often pungent horseradish or another bitter, spicy vegetable.  My dish is radish sprouts and grated daikon radish with an olive oil and balsamic vinegar dressing.  It’s hot, but it doesn’t clear your sinuses the way grated horseradish does.

Parsley represents the Promised Land. It is dipped in salt water and eaten to remember the miraculous crossing of the Red Sea and Israel’s journey to freedom.

There is a lamb shank bone at our table that isn’t in the picture.  The lamb bone represents the Passover lamb.  This is a memorial to the Passover lamb.  It’s interesting that in Ezekiel’s temple, no lamb will be sacrificed at future Passovers.  (Ezekiel 45:21-25).  And today, since the Temple in Jerusalem is no longer there, no Passover lambs are sacrificed.  The Samaritans continue to sacrifice the Passover lamb, however, on Mt. Gerazim, according to their tradition.  We did not sacrifice a lamb to keep this memorial.

Traditionally the Passover Order follows a prescribed retelling of the Exodus story with 4 cups of wine and the breaking of the matzo at the end of the meal.  We didn’t follow this specifically.  Not being wine drinkers, I couldn’t imagine drinking that much wine at one meal (and Mr. Joybilee had to drive back to work after dinner.) The third cup of wine is the cup of Redemption.  We shared this ceremonial cup of wine remembering the death of Yeshua our Passover lamb and his promised return to Jerusalem one day very soon.

Hebrew for Christians explains the meaning of the 4 cups of wine:

“The Four Cups of wine used in the Seder symbolize four distinct promises made by God as told in Exodus 6:6-7. These are traditionally referred to as follows:

Which cups did Yeshua drink during his early Passover Seder with his disciples? He drank the first two cups in the traditional way. At the third cup, the Cup of Redemption, he said: “This is my blood” (Matt. 26:27-39). Jesus told his disciples that He would not drink the fourth cup (the Cup of Restoration), but promised to do so with them in the coming Kingdom (Matt. 26:29), after the Great Tribulation when “all Israel shall be saved.” 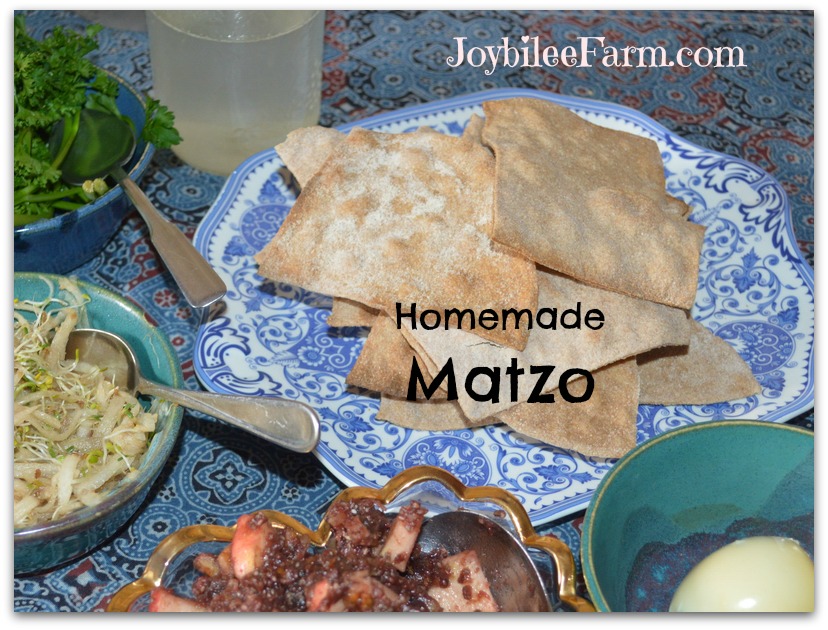 The centre piece at the table is the unleavened bread or matzo which is eaten a few times during the ceremonial meal.  3 pieces of Matzo are hidden in a linen cloth at the beginning of the meal and are brought out later.  The middle one is taken out of the cloth packet and is called the afikomen. Some Messianic Jews think that the final unleavened bread – the afikomen – is the bread that Yeshua spoke of when he took the bread and gave thanks and broke it and said, “this is my body which is broken for you.  Do this in remembrance of me.”  And we did eat it in remembrance.

Mr. Joybilee had to work on Monday night so our Passover celebration was shortened.  There was a total lunar eclipse later in the night, but we missed it because of the heavy cloud cover.  Instead we enjoyed the superb photographs that others took of the eclipse.

The Recipes for our Passover Seder 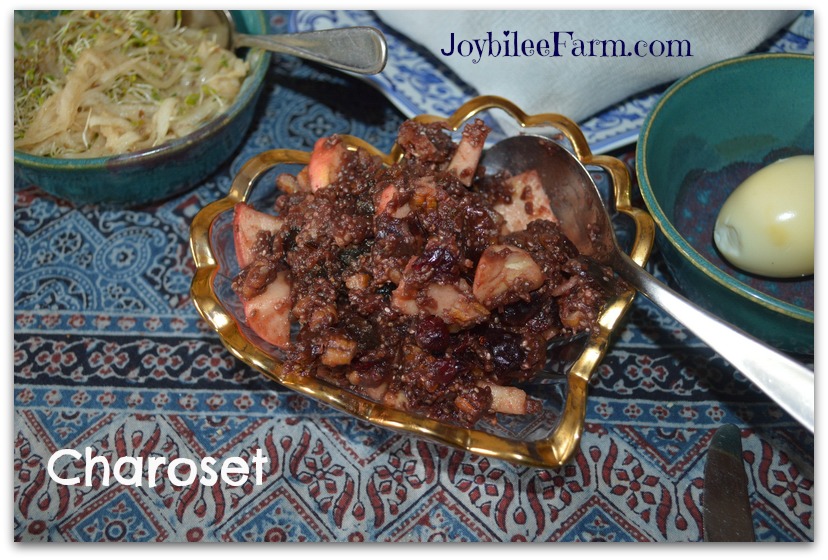 Soak the chia seeds with the wine for 30 min.  Beat them with a fork till the mixture just begins to thicken.  In a separate bowl combine apples, dates, cinnamon, sugar, pecans, and lemon juice.  Mix well so that apples are fully coated in lemon juice.  Add the chia/wine mixture and mix well.  Chill for at least 1 hour.  This mixture will thicken as it chills.

Serve as a relish or as part of the Passover Seder.

This makes a very nice relish at other times, too.  Try it mixed with yoghurt for breakfast.  Or omit the sugar and eat it for breakfast by itself.

Toss together the radish, sprouts, and optional onions.  Add the oil and vinegar and toss again. Cover and chill until ready to serve.

Boil an egg for 15 minutes until hard boiled.  Put it in an oven while you are roasting your meat or vegetables for the meal.  Let it bake for 20 minutes at 325F.  The egg will brown lightly.  Remove from oven and set aside to cool.

Wash and drain one bunch of parsley sprigs.  Tear into 4 inch branches.  Set aside.

Place 1 cup of water and 1 tsp of Celtic or kosher salt in a bowl or jar.  Mix till the salt is fully dissolved.  To serve dip the parsley into the salt water and eat.

Once the formal part of the Seder is complete the steaming hot dishes are brought to the table.  At our home it was roast lamb, roasted sweet potatoes with pecans, and a green salad, with more matzo.  Traditionally many Jewish people do not eat lamb at Passover, because the Passover lamb cannot be sacrificed in the Temple.

Thank you for joining me for Passover.  It was wonderful to have you join us in our celebration of freedom.  Next year in Jerusalem — may it be so.