You are probably familiar with this iconic harbinger of Spring — the Dandelion.  But did you know that underground, this common weed contains a powerful antioxidant, detoxifier, and liver tonic?  Dandelion root tea has been shown to reduce cancer tumors and resolve leukemia in scientific studies in Canada.  It reduces the body’s toxic load allowing the body’s own detoxification system to function optimally, reversing cancer and other health issues.  And you have this miracle herb, dandelion root, growing near you, just waiting to be harvested and used in your daily tonic dandelion root tea. 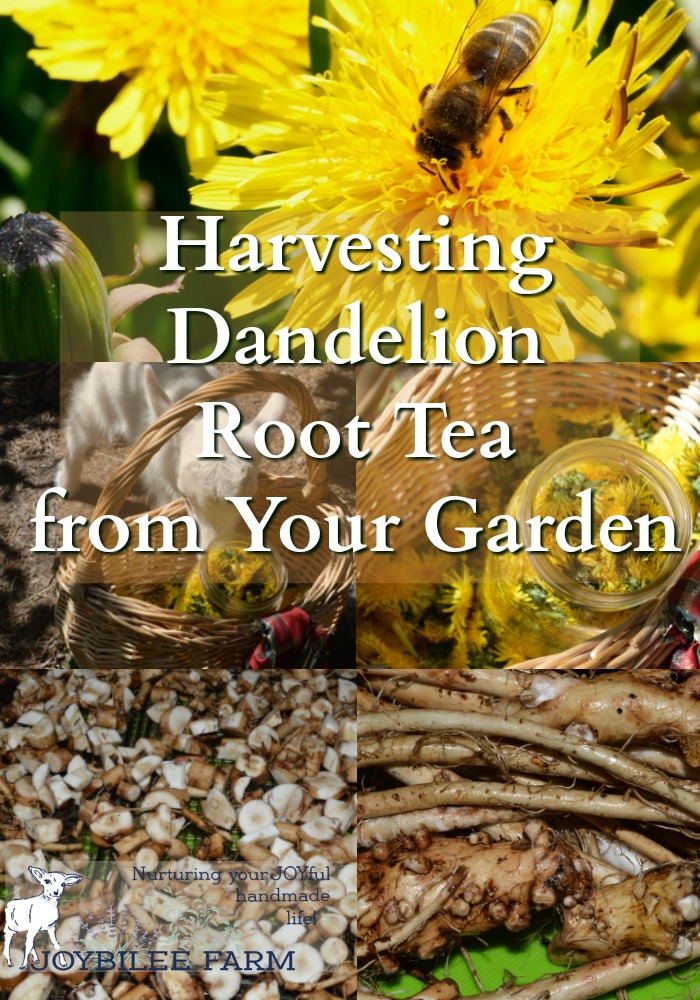 Did you plant dandelions in your herb garden this year? Neither did I. But I still have them growing on the pathways, and in the wild areas – anywhere the chickweed didn’t take over first. In the spring I harvest the young dandelion greens and unopened flowers to make dandelion tea, to add to green salads, and to stir into steamed spinach greens for just a hint of bitterness. Bitters are good for the digestion, I learned in my Intermediate Herbal Course at the Herbal Academy of New England. (I love that course! Thanks for asking. I’ve learned more than I ever thought I would. More about that in another post.) Dandelions, all bitters really, support the liver and the gall bladder and encourage proper digestive action.   Dandelion roots also stimulate detoxification and support both the liver and the kidneys to optimize their work.  It’s a powerhouse of health that you might be overlooking. 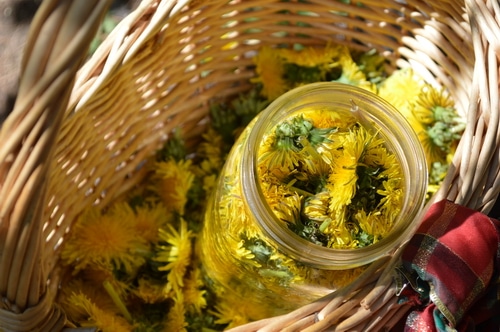 While you harvest the young greens and unopened flowers in spring, the roots should be harvested in the fall, after frost, before the winter’s rest. There is some discussion on whether early spring roots or late fall dandelion roots are best medicinally. There is a difference. Dandelion roots harvested in fall are slightly sweeter and less bitter than dandelion roots harvested in the spring. Both are helpful to your liver and bile production though. The fall dandelion roots have a higher concentration of the prebiotic inulin,that encourages the good microbes in your gut to bloom. Having more beneficial microbes in your gut like lactobacillus, improves your immune function, helps you think more clearly, protects you from bad microbes like staph, and strep, and even helps you maintain a healthy weight. 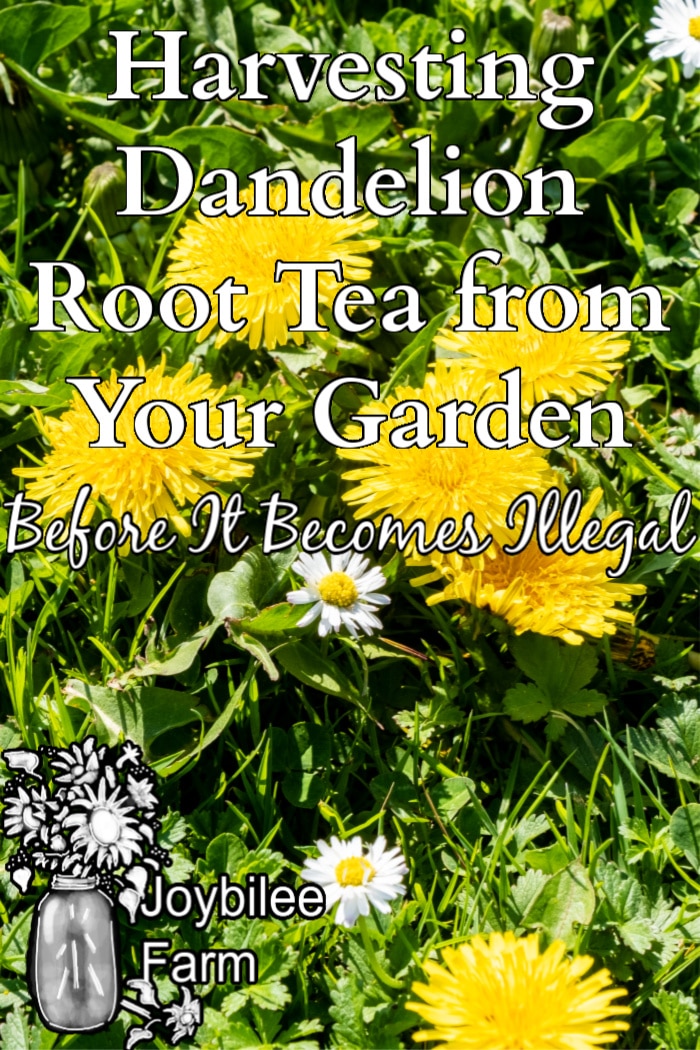 I like to harvest dandelion root tea in the fall because it’s easier to pull the root out, when the soil is light, after the vegetable harvest is finished. After the winter snow and the early spring thaw, the roots are more committed to their place in the soil and tend to break off, when I pull. So know that you can harvest dandelion roots in either fall or in the early spring before the heavy rosette of leaves form, but fall is best.

While you could conceivably harvest them in the middle of summer, if you wanted to, the dandelion roots would not be as medicinally potent, because the dandelion is putting its energy into growing leaves, flowers, and seeds.  That energy is drawn from the root. Once the fluffy dandelion clocks (the seeds) are blown away by the wind, the dandelion draws in the sun’s energy through the leaves (photosynthesis) and replenishes the energy in the root, settling in for a long winter of dormancy. So if you have the patience, wait until after the first few frosts before you head out to the garden with your garden fork. 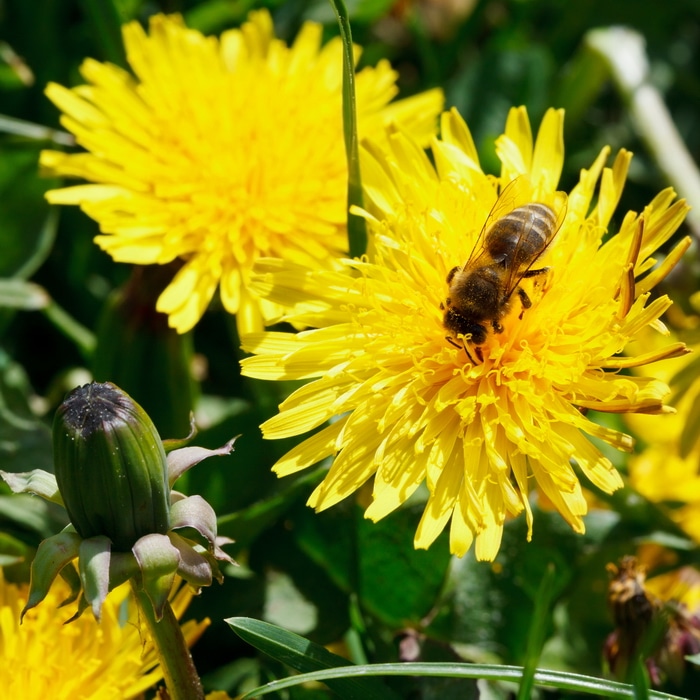 How to harvest dandelion roots

If you can wait until a few days after the rain, the soil will be more cooperative to your pulling the whole dandelion root up in one piece. If a piece of the root breaks off, the dandelion will come back in the spring – so there’s no problem if you lose a bit of the dandelion root.

How to prepare the dandelion roots for tea

Take your dandelion roots, while still in the garden and shake off as much garden soil as possible. Use your pruning shears or a sharp knife and cut the long, green dandelion leaves from the base of the root. These can be washed and dried till crisp, and crumbled into salads and soups during the winter to add their bitterness and their nutrition. The leaves can also be tinctured with other bitters as a digestive aid. Or you can feed them to your chickens and goats. They love them, too. You can find more dandelion recipes here.

Rinse the dandelion roots under cool water. Use a soft brush to clean the dirt off the roots. They will become quite white with a nobby nature. They have the texture of a parsnip. 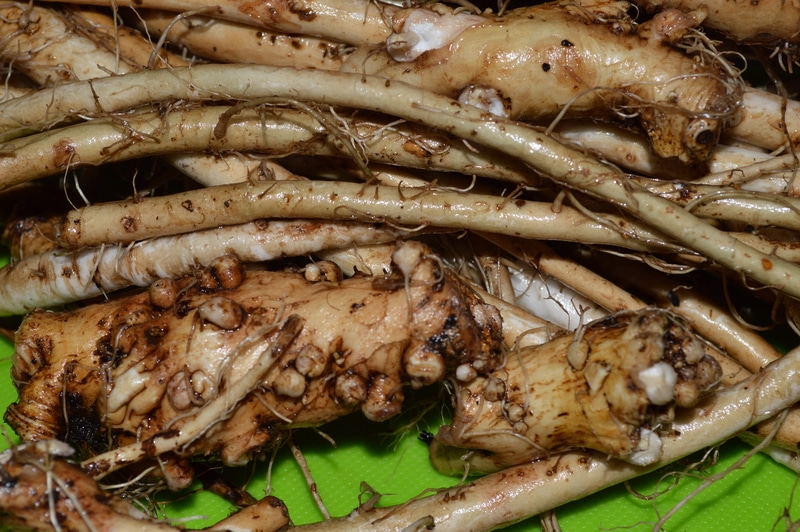 Slice the dandelion roots into 1/4 inch slices. Take the larger coined slices and quarter them so that all the slices are uniformly the same size. Dry the dandelion roots with some heat, from a dehydrator or in an oven, until hard and crisp. They can be cooled once they are very hard. Store in a glass jar, and label. The properly dried roots will keep for a year or more, if you keep them in a cool, dry place. 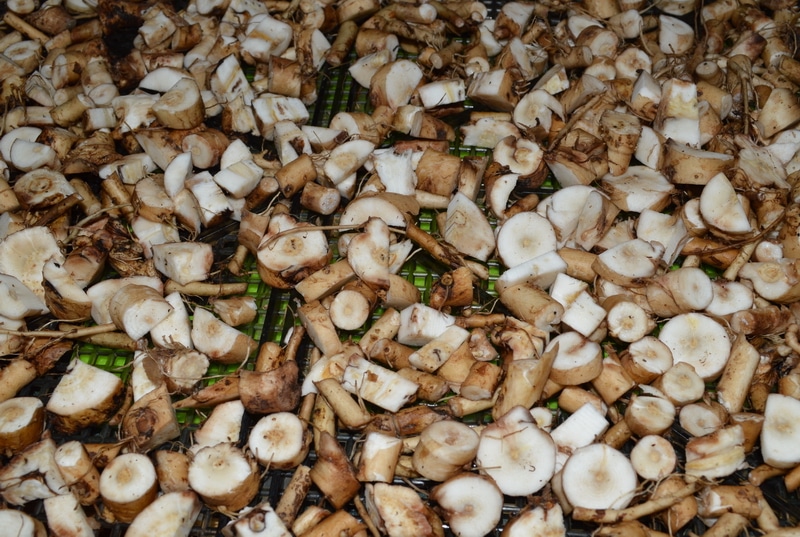 How to make dandelion root tea

Dandelion root tea is a nourishing diuretic tea, that supports the liver, and helps your body detoxify. It’s been used for centuries by traditional medicine makers for liver and kidney health. Dandelion root tea may even cure cancer. That premise is being studied at the University of Windsor. See my references below for more information about these exciting, evidence-based investigations. To make dandelion root tea, break the dandelion root in a mortar until it is chunky, and the size of lentils. Dandelion root tea is a decoction rather than an infusion. You need to simmer the root in a pan on the stove in water for about 15 minutes. Allow the decoction to settle, and then strain it into your cup. Those enamelled cast iron tea pots can hold the decoction and strain it in one effort. They come with a mesh strainer that’s perfect for fine teas and herbal remedies.  I use mine to make all my tea — both herbal and camellia  — both infusions and decoctions.

Add 2 cups of water, to 2 tsp of herb. Simmer for 15 minutes. Shut off the heat. Allow the mixture to settle in the pan. Stain and pour into a cup. If you make extra, store the remainder in the fridge and consume it within 24 hours. 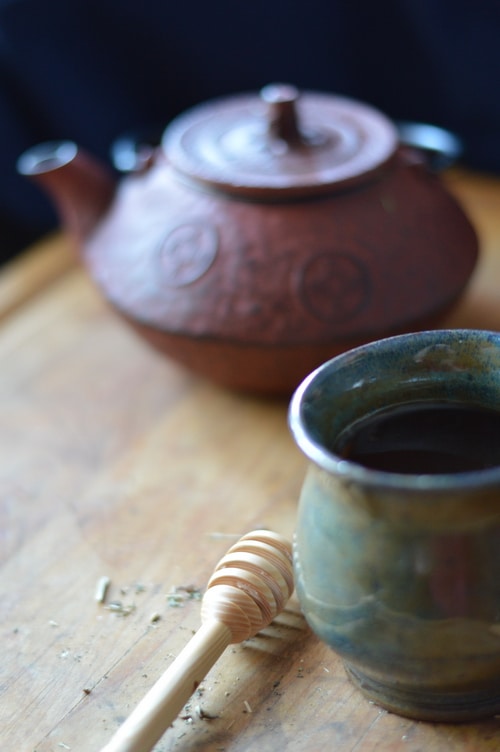 Doesn’t it make sense though, since dandelion root tea supports your liver and kidneys?  These are the two organs responsible for dealing with waste and toxins in your body. And the best part of this “discovery” is that dandelion root tea did not harm any normal cells – food doesn’t usually cause harm to normal cells. Dandelion root tea is a food, a food that’s available free where you live.  In fact, dandelions are pervasive and seem to follow human habitation.  Have you noticed that the herbs we need most can be found close to where we are living?  God planned it that way, I think.

When we first moved to our 140-acre mountain paradise, in zone 3, there were no dandelions. Seriously, I looked and I couldn’t find a single one. I never planted them. But here we are 12 years later and both garden and pasture are heavily blessed with dandelions. I’m not complaining. I love plants that don’t need to be babied to survive.

So get out to the garden and harvest some dandelion root tea from your own garden and drink the benefits.

But I don’t have a garden

What if you don’t have your own garden? Don’t harvest medicinal roots near roadways or anywhere that’s been sprayed with herbicides or pesticides. Most city parks, roadways, and public buildings will be suspect, unless your city has put in place a no-spray by-law. If you can’t find some dandelion root tea growing near you, you can order it online from Mountain Rose herbs, my favorite source of organic teas.

“Evaluating The Efficacy Of Dandelion Root Extract as an Anticancer agent In Highly Aggressive and Resistant Cancers” paper given by Pamela Ovadje at The 9th Annual Conference of the Natural Health Products Research Society of Canada, May 22nd to 25th, 2012, Kelowna, BC, Canada.

Disclaimer:  This is and all articles on this site are for educational and information purposes only.  Please consult your medical professional for diagnosis and treatment of all medical symptoms.  This article does not replace the care of your own physician who knows your case personally.  Thanks.