Rhubarb is an easy to grow perennial that deserves a spot in your temperate garden.  Do you have a patch of this tart perennial vegetable on your homestead?

Almost every homestead in BC has a rhubarb plant growing close the house.  Rhubarb is a hardy perennial that will grow in the most difficult circumstances.  It doesn’t mind frost.  It is one of the first plants to show signs of life in the spring. It is so hardy that we will often find it already growing when the snow melts.

During World War I, the leaves of rhubarb were mistakenly recommended as a food source in Britain and many people were poisoned after ingesting the leaves, so we don’t recommend you eat them at all.  You can safely compost them or try one of these other creative methods for using rhubarb leaves from Learning and Yearning.

Many animals, including my goats and llamas, will eat rhubarb leaves in the spring while leaving the acidic stalks.  Since they only do this occasionally, I assume the leaves offer medicinal benefits to them.  Perhaps rhubarb leaves help with deworming. 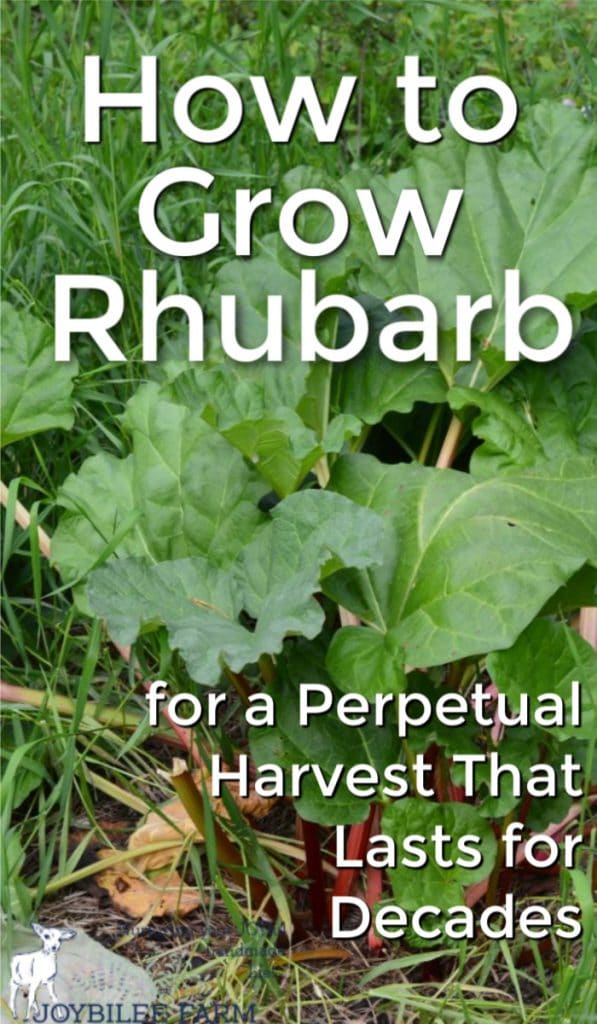 Propagating rhubarb in your homestead garden

Rhubarb grows in zone 2 to 8.  It requires an extended chilling period below 40 degrees F, in order to produce stems after winter.  It can be grown as an annual from seed in zones 9 and 10, but the stalks will be smaller and less robust.

There are several common varieties of rhubarb available to the home gardener.  Canadian Rhubarb has green stems with just a hint of red.  These stems will remain green.  The plant is common on Canadian homesteads.  Strawberry rhubarb, on the other hand, gets its name from the red stems.  This rhubarb has a pink tinge when cooked down.  The flavor is similar to Canadian Rhubarb but the color is definitely a warm red, even when young.  The third type of rhubarb that I am growing is called “German wine” rhubarb.  The stalks are green with red to pink on the base of the stems.  The flavor of German wine is sweeter than other rhubarbs.  It is useful for processing and fresh eating.

Rhubarb is ready to harvest when the stalks are about 18 to 24 inches long and at least an inch thick, and firm.  In my zone 3 that’s about a month from snowmelt, for your first harvest.

If you are planting a new bed of rhubarb on your homestead, try to get plants from a neighbor rather than planting garden nursery plants.  The plants already growing in your neighborhood will be acclimatized to your region and have more vitality than nursery plants that are shipped over many miles. Take root divisions in early spring or late fall from 3 to 4-year-old plants, when they are just beginning to emerge or after harvest. There should be as little vegetation on the plant as possible. 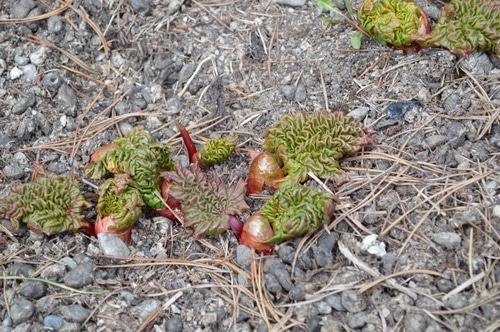 Rhubarb benefits from annual top dressing with composted manure or 10-10-10 organic fertilizer.  It’s a heavy feeder and grows really well when given a second application of composted manure when you are done harvesting for the season.

Bringing a neglected rhubarb back

Let’s talk about how to bring a rhubarb plant back that’s been neglected.  After many years of growth, a rhubarb plant needs to be divided.  The root grows woody in the center and the tender stalks grow around the circumference of the root.  The harvest seems huge but renewing the plant with some extra attention will help it improve.

Divide the plant in early spring or late fall, by cutting through the root with a sharp, clean shovel.  I like to slice off the sides of the root while leaving the original root intact.  This way I will get a harvest from the original plant, while allowing the new root divisions to take hold, in another location.  Take 4-inch pieces of root with a bud attached.  You want some growth buds or stalks attached to the root portion that you are taking away from the main plant.

Prepare a new rhubarb bed by tilling the soil well and amending with an inch or two of well-composted manure.  Dig a hole and plant the root division to the same depth as the original plant.  Firm the roots in well and water thoroughly.  Mulch with clean straw to keep down weeds and conserve moisture.

You can plant rhubarb plants 18 inches apart in a row with enough room between plants to allow you to walk between rows to weed.  If you are planting in a raised bed, plant them on 18-inch centers to allow the plants to spread.  You will be getting to weeds from the sides of a raised bed so you don’t need room to walk between the rows.

In the first year that you plant a new rhubarb bed, don’t harvest any stalks.  Allow it to send up a flower stalk and grow naturally.  You can start harvesting rhubarb in the second season from planting. 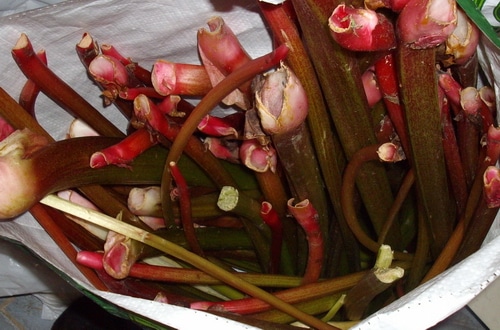 How to harvest rhubarb stalks

To harvest rhubarb, grasp the stalk at the base of the plant and pull up.  Do not cut the stalks from the plant, but instead pull them out of the root.  This will leave behind a sheath and the stalk will pop out from the root.  I like to break off the leaves from the stalk and lay them out in the garden under the plants to provide mulch.  You’ll find that rhubarb leaves act as a wonderful mulch and inhibit weeds.

To keep your plant thriving, only harvest ½ to 2/3rds of the longest and thickest stalks at a time.  New stalks will grow from the root and the stalks you have left will grow thicker and longer.  Harvesting allows more sunlight to reach the roots, which encourages new growth.

The flower stalk looks different than the fruit stalk on a rhubarb plant.  You may find a flower stalk coming up in mid-June from your root, or if the plant gets stressed from lack of water during the growing season.  Break this off if you intend to continue harvesting your plants.   Never take more than 2/3rds of the stalks from your plants at any one harvest, and allow new stalks to grow before harvesting again. 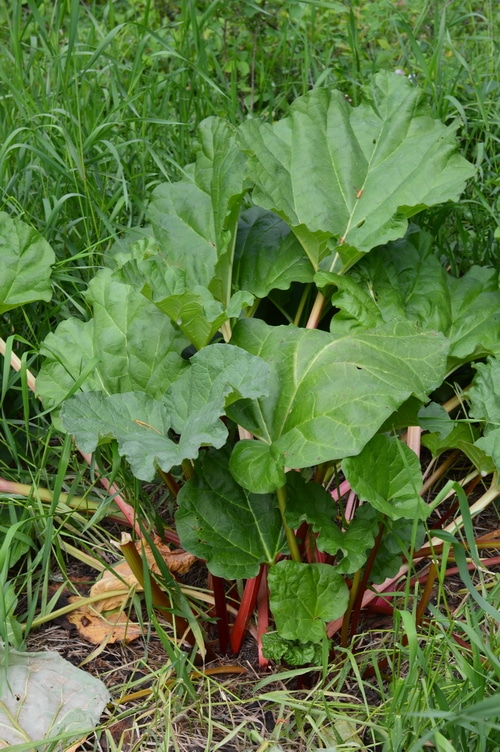 Around midsummer, or if the plants get water stressed, rhubarb plants will stop growing new stalks.  The stalks will be thin and feel hollow.  At this point, stop harvesting, the remaining stocks that the plant has will be needed to feed the root for next year’s harvest.  You should stop harvesting for the season, mulch for the second time with well-composted manure, and leave the plants to grow naturally for the rest of the season.

A rhubarb plant that sends up a flower stalk will produce viable seeds.  Rhubarb plants will cross-pollinate with other rhubarb plants in the same area.  So if you are growing more than one kind of rhubarb and both varieties of rhubarb flower, you may have some cross-pollination.  The seeds that come from flowering rhubarb are viable and will grow more rhubarb plants.  Let the seeds dry on the stalk until frost.  Cut off the seed stalk and place in a paper bag to finish drying indoors.  Then rub the seeds from the stalk when completely dry.

Plant the seeds in the spring and see what grows.  You might come up with a brand new rhubarb variety.  Always taste the stalks from a new planting from seeds, to see if you like what comes up.  Your best plants can be cloned after year 3 to produce new rhubarb plants. (clonal reproduction).

When growing rhubarb from seed in zone 2 to 8, leave the first year plants to develop a strong root system.  You can harvest stalks from the plants the following year.  By year three, in fertile soil, your plants will be robust and you’ll be able to clone them for more rhubarb plants.

After the Harvest – What to do with Rhubarb 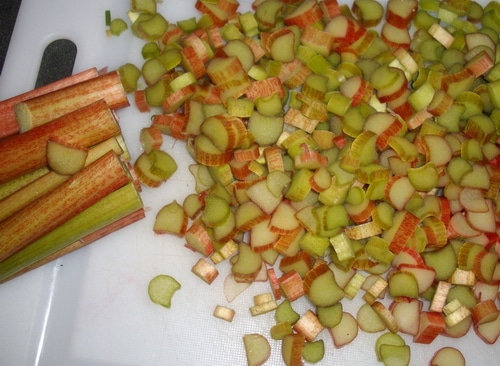 When you harvest the stalks wash them right away and be sure to keep them from drying out until you can process them. Cut off the tough part at the base of the stalk and the part where the leaf was attached.  They are tart and juicy and many people like to eat them fresh, dipped in sugar.  That’s a bit too much tartness for me.

There are four basic ways to preserve rhubarb.