You are here: Home / Heal / Gold, Frankincense, and Myrrh Salve for your DiY Apothecary

The three Wise Men brought gold, frankincense, and myrrh to Jesus/Yeshua when he was a young child, still in Bethlehem.  The Frankincense and Myrrh were common healing spices used in embalming, and in ancient medicine.  They were known for their ability to heal wounds and to stop decay.  And their healing virtues would have been known to the women of the bible, who were tasked with caring for the sick and preparing the bodies of the dead.   It is not outside the realm of possibility to think that Mary may have made a healing myrrh salve or frankincense salve to keep her young child healthy.

Theologians have long postulated that the gifts of the wise men represented wealth for the holy family to sell and to finance their journey to Egypt, and that they had a prophetic significance. 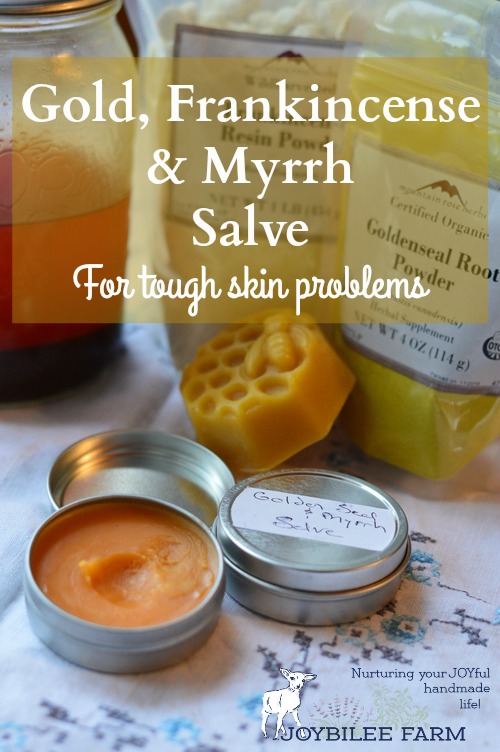 Frankincense was sprinkled on the daily grain offering in the Temple, while myrrh was a common spice in embalming, prefiguring the Messiah’s bloody, sacrificial death.  I propose that perhaps they were used in a home apothecary by Mary, although scripture is unclear about what happened to the wise men’s gifts.  Perhaps Mary infused a small portion of the myrrh and frankincense in Bethlehem olive oil and made a salve like this goldenseal, frankincense, and myrrh salve for her family’s home apothecary and “bug-out first aid kit”.

You’ve probably seen it in the health food store.  Tins or jars of goldenseal and myrrh salve are one of the mainstays of the herbal apothecary.  And for good reason.  Goldenseal Myrrh salve is the salve you need for stubborn skin issues that don’t seem to go away.  Issues like psoriasis, eczema, infections, swelling, scars, rashes, and inflammation find relief in this folk remedy.  If the doctor has only corticosteroids to offer you for your condition, which suppress your symptoms without healing the underlying issue, this salve may help. 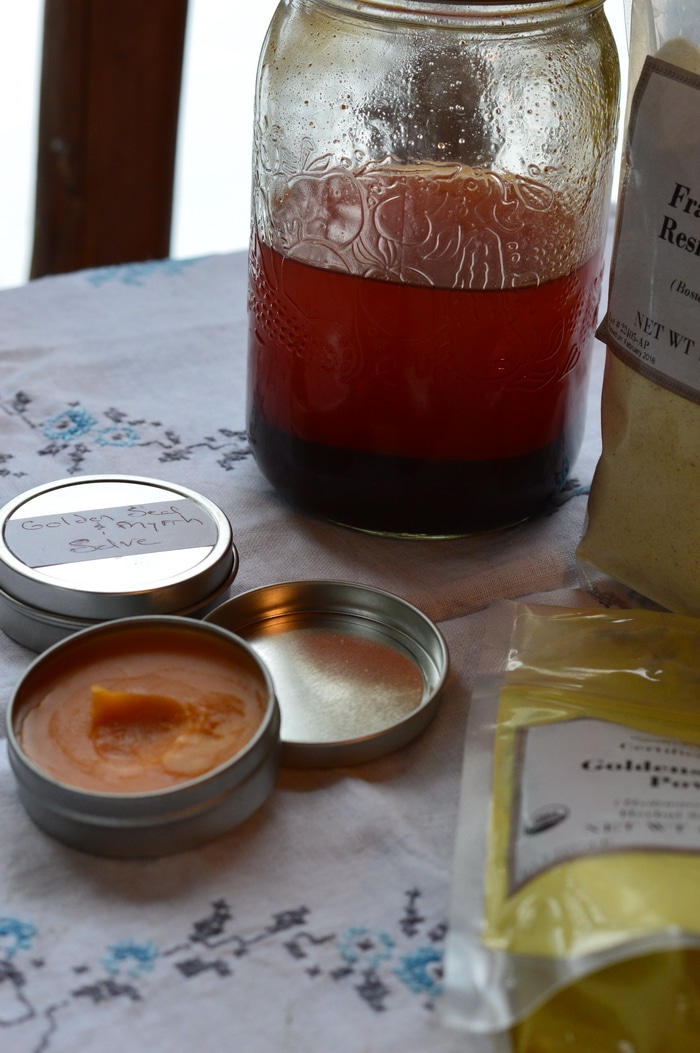 Frankincense and Myrrh are exotic resins, scraped from the dried exude of Middle Eastern trees.  They are strongly aromatic and held in esteem in several cultures for millennium.  Used as fragrant incense in worship, they are dear to purchase. Thankfully, you don’t need much.  Both Frankincense and Myrrh are anti-inflammatory, anti-microbial, analgesic, anti-fungal, antiseptic, astringent, and tonic. As resins they are not soluble in water.  When made into tinctures with alcohol, only the strongest alcohol — around 95% — will work.  Anything lower will just be a mess in the jar.  However, resins are soluable in oil and make wonderful salves, lotions, and creams. Get the finest grade of myrrh and frankincense powdered resin.  Incense grade resins are generally sold in hard chunks and are not as easy to grind into a powder. 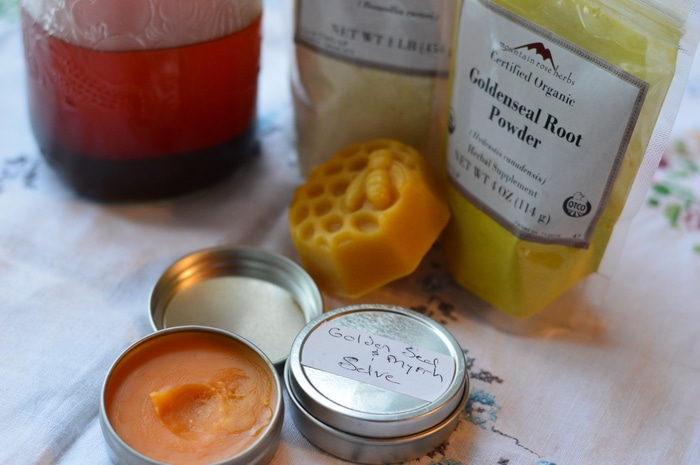 Goldenseal is an endangered North American woodland herb.  Since the root is used, it should never be wildcrafted.  Organically grown roots are widely available.  The root is bright yellow and contains berberine, a bitter alkaloid that is valuable for both skin issues and stomach complaints.  Goldenseal is antifungal, antimicrobial, antiseptic, anti-bacterial, anti-inflammatory, astringent, as well as being a circulatory stimulant.

Cayenne pepper is often added to herbal medicine as a catalyst to increase circulation and warmth, so that the other herbs work more efficiently.  I’ve added it to this recipe for the synergy it offers. 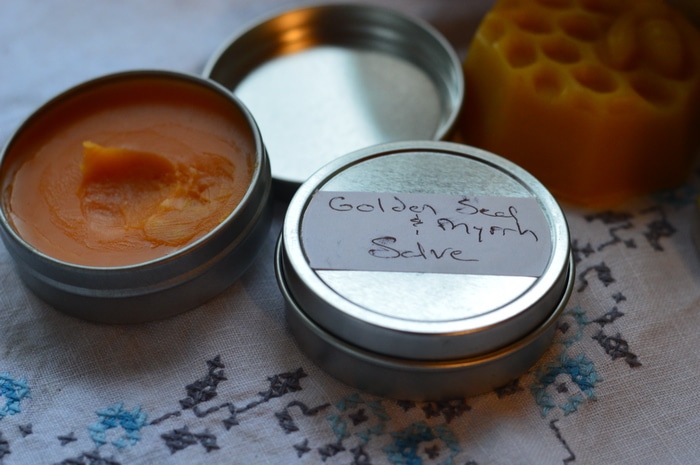 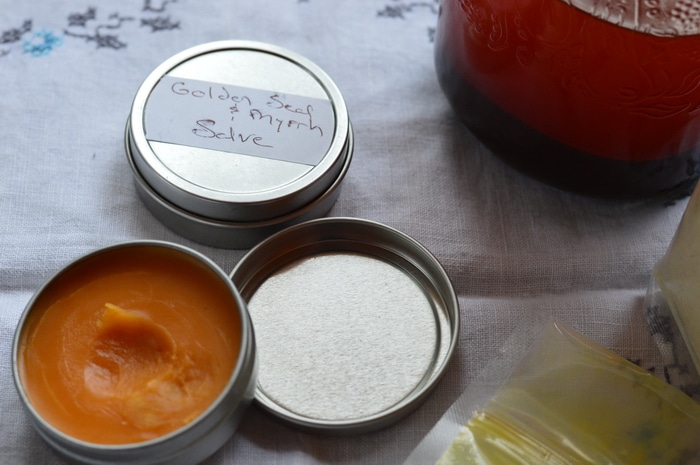 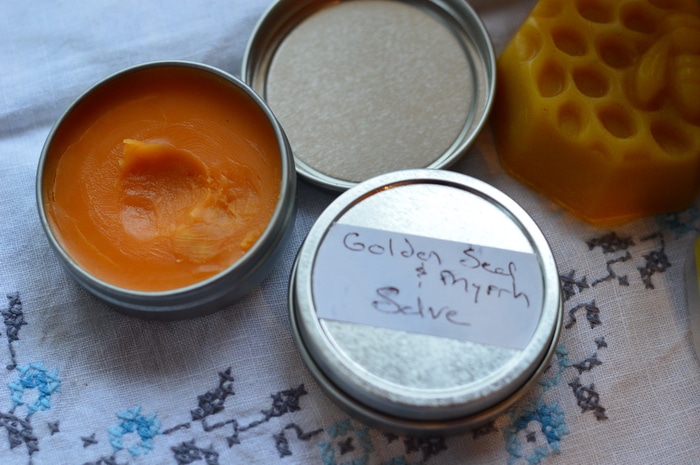 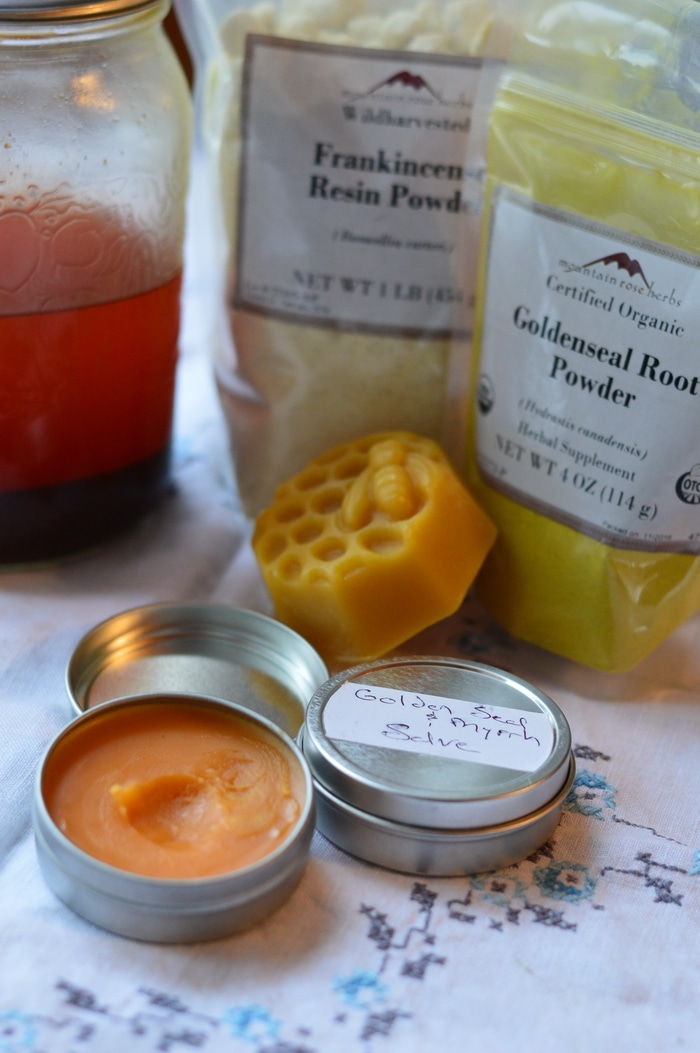 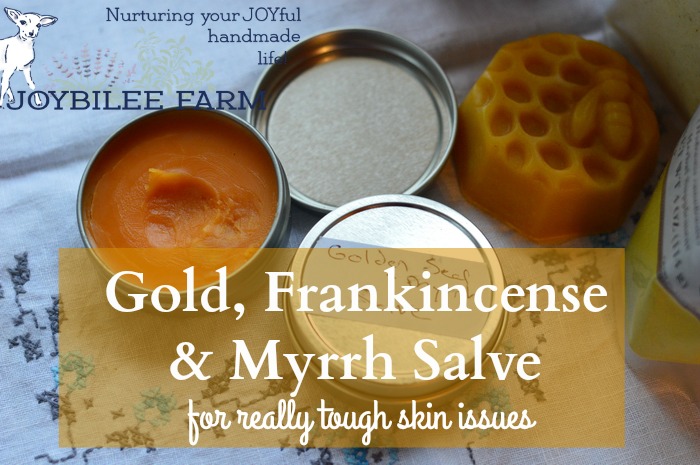 How much herb should I buy?

You’ll be able to make this recipe with ¼ pound each of goldenseal, frankincense, myrrh, and cayenne pepper.  You’ll have ample goldenseal and cayenne pepper for other herbal remedies, too.  Because of the dearness of frankincense and myrrh I will pour more olive oil or coconut oil over the pressed resin to get one more infusion before I use the resin in incense.  As long as the infused oil is fragrant, it contains active herbal actions.

If goldenseal isn’t available, other berberine containing roots can be used in its place, although for this application goldenseal is the best choice.  While goldenseal adds strong antimicrobial actions to this salve, Mary, of course wouldn’t have had access to it.   However, other berberine plants grow in the holy land, such as barberry.  The root of barberry contains the same berberine alkaloid as goldenseal.

If you feel that the herbs in this salve are too dear for your budget, (I’ll admit, they are some of my more expensive herbs) get together with a dozen friends and do it as a group project.  There are enough herbs on the shopping list to make 3 cups of infused oil.  That is enough to make 12 to 14 batches of this recipe or 28 tins of salve.  You’ll need 1/2 ounce of beeswax and 1/2 ounce of shea butter or cocoa butter for each recipe, too.

As you are infusing this fragrant oil and making a quality skin-healing goldenseal, frankincense, and myrrh salve, consider the wise men’s gifts and be wise in your herbal knowledge. Herbal knowledge is a gift. 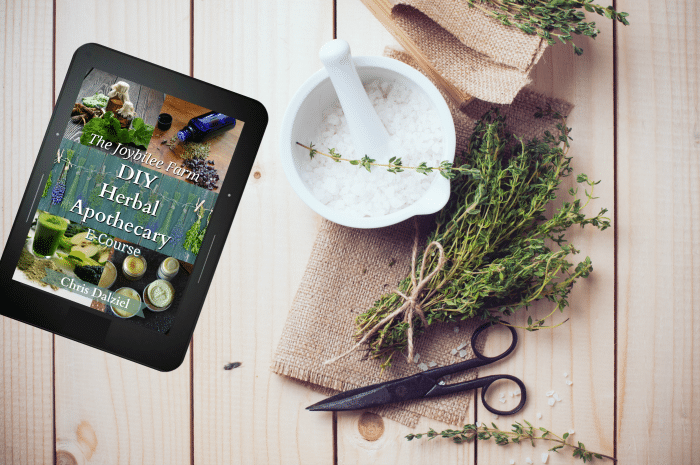 Let this year be the year that you finally keep that promise to yourself and learn about growing and/or using herbs for your health and wellness needs.  It starts with a salve, a tincture, or a cup of herbal tea.  It begins with a sip, a slather, or a swig.  And your knowledge grows with experience.  You don’t have to accept the pricey steriod prescription or the other meds that just mask the symptoms, while at the same time putting your health at risk, maybe damaging your liver or kidneys.  You can take control of your health with knowledge and determination.  It begins by taking the first step.

Talk to you soon.