Thieves vinegar recipe
You are here: Home / Breathe / How to Make Thieves’ Vinegar from Scratch

You can make this magic, disinfectant vinegar at home with ingredients from the grocery store or from your garden. Thieves Vinegar Recipe.

The recipe for thieves’ vinegar is older than the internet.  It’s older than television or radio.  It’s even older than the printing press.  The recipe came out of a very dark time in history, when trader ships replaced the Silk Road, men killed each other for cloth and spices, and honest men were forced to steal.

In the Middle Ages, during the black plague, times were tough.  50% of the population of many European cities died.  The wealthy merchant cities and seaports were the hardest hit.  Eventually, the plague traveled throughout the continent.  The Farmer’s Markets closed.  With the dwindling peasant population, farm laborers became scarce and so did food.  The price of food in the cities increased because of the shortage.  Merchants, who before the plague were growing in wealth, now had a shortage of customers and a shortage of staff.  Some of these merchants changed their professions, temporarily.  They became grave robbers – stealing the jewels, gold, and cash from the dead bodies of plague victims.

Those who were successful found magical protection from the deadly disease. They bathed themselves in a spice-infused vinegar to ward off the plague.  With this protection, they could remove the gold rings, and gold fillings from the wealthy cadavers, without getting ill themselves. At a time when most people didn’t bath at all, this kept the infected fleas feasting on the unwashed people. Thieves’ vinegar grew in renown. 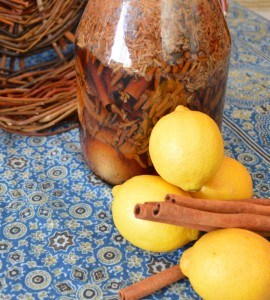 The thieves vinegar was disinfectant.  It killed bacteria on contact.  It also repelled insects.  And the spices like cloves, cinnamon, and lavender strengthened the immune systems of the thieves and fought inflammation.  These spices are antioxidant, too, and fight free radical damage in the human body.  While I am using white vinegar for this recipe – the thieves used cider vinegar and wine vinegar.  You’ll notice that the ingredients are quite similar to Madeira, a spiced wine that developed around the same time.  If you want to take this internally, I’d recommend the Madeira.  It’s more palatable.

You can make this magic, disinfectant thieves vinegar at home with ingredients from the grocery store or from your garden.  You don’t need to buy expensive multi-level marketing essential oils to make it. (Here’s my philosophy on essential oils.) And it increases the disinfecting power of the usual citrus vinegar, that you already have steeping on the windowsill of your homestead kitchen.

In case you don’t know about making lemon vinegar or other citrus vinegar you can get those directions here.

In fact, you don’t even need new, fresh spices to make this effectively. You can use leftover cinnamon from those spice apple drinks.  You can use older spices that you’ve had sitting around for a while – those cloves you bought because you were going to make those orange pomanders to repel moths.  You can even use the spices from last season’s garden after you bring in this season’s crop.

The liquid will turn dark brown. The spices will swell. After a month, or as long as you choose to let it steep you can strain it. I often leave mine for up to 3 months to infuse all the goodness from the spices.

Strain the liquid through a sieve. Decant the infused vinegar into a clean 1-quart jar. Date and label the bottle. Compost the residue.

To Use thieves vinegar as a cleaner

Pour it undiluted into a spray bottle. Spray directly on the surfaces that you want to disinfect and wipe clean. This works more effectively than any commercial cleaner I’ve used. It de-greases and removes both dirt and stains. After steeping for a month the pH rises, too. It’s gentler on surfaces that react with acid than using straight vinegar – like wooden tables and high chairs. Leave the residue on your cleaned surface to continue to repel bacteria for several hours. There’s no need to rinse.

Making your own cleaning products removes toxic commercial products from your house. It is frugal, satisfying, safe, and leaves your home smelling amazing.

Where to buy the ingredients:

This recipe is a great way to use up older, whole spices, when you harvest fresh spices and herbs from your garden each new growing season or when you replenish your kitchen supplies.

If you need to buy whole spices for this recipe I recommend buying them in bulk at your local bulk food store.  If you don’t have a local source, a reputable online source for organic spices is Mountain Rose Herbs, my go-to suppliers.

If you’d like to learn more about the Middle Ages and their use of herbs and spices, GA Henty novels for boys are full of amazing tidbits of information.  This is the novel that I found the information about thieves’ vinegar.  GA Henty, When London Burned, the story of the plague and the great fire.  Your homeschool students will love this historical novel.
Previous Post: « The Art of Story Telling
Next Post: Steps to Homesteading »