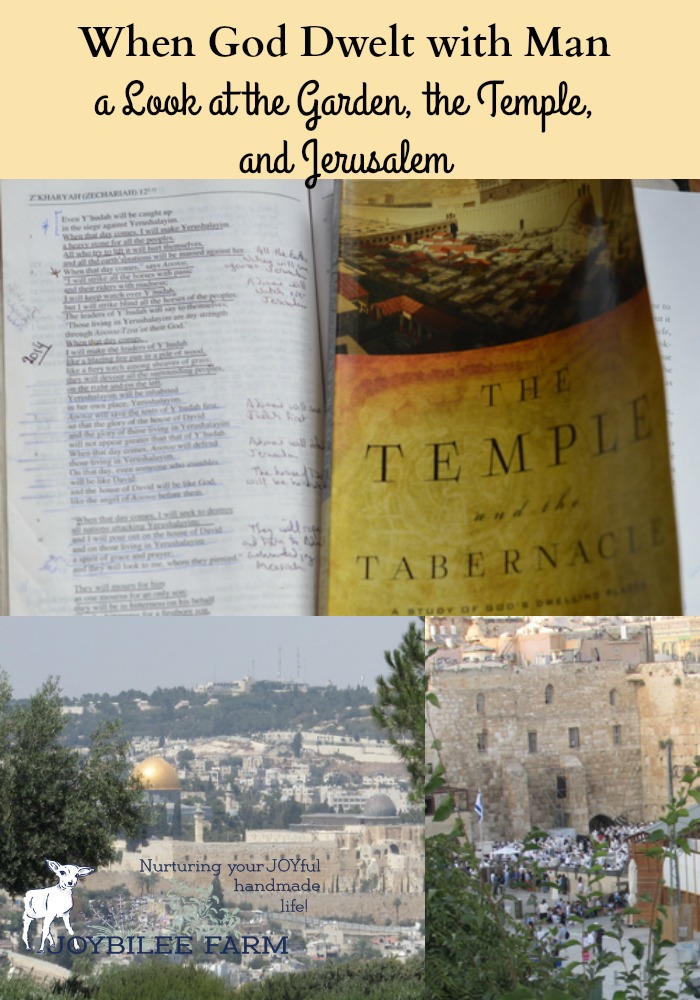 To gain an understanding of the current issues it’s helpful to understand the instructions given for the Tabernacle, Solomon’s Temple, and the Temple of built by Zerubbabel and renovated by Herod.  J. Daniel Hays’ book, The Temple and the Tabernacle, a Study of God’s Dwelling Places from Genesis to Revelation (Baker Books: Grand Rapids, Michigan, 2016) is thoroughly research and impressive in its scope, and is a helpful foundation for this understanding. 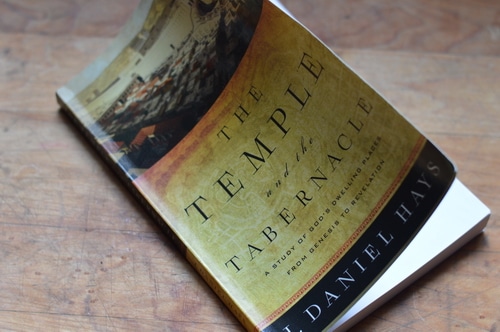 Hays begins at the creation account with the garden of Eden as a pattern for the Tabernacle and the Temple.  In the garden God dwelt with man.  Man and woman talked to God every day as they walked together in the garden.  You knew that there was a good reason to plant a garden, right? However, after Adam’s sin, the man and his wife were kicked out of the garden.  An angel with a flaming sword was placed at the entrance on the East side of the garden to prevent man from coming back into the garden to eat from the Tree of Life.  I never realized before that in order to come to the Creator God, man was required to turn his back to the rising sun, facing west.  From the very beginning the choice has been between worship of the sun or worship of the One who created the sun. 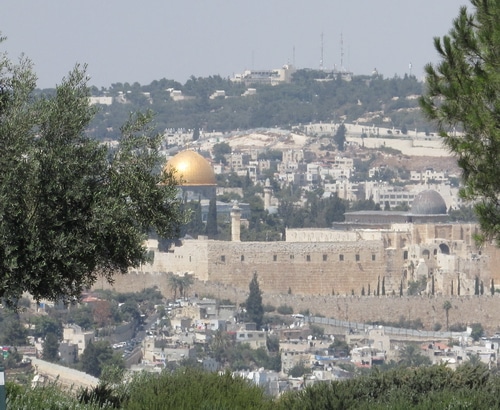 Dome of the Rock, looking east toward the Mount of Olives. Photo credit: Sarah Dalziel, used with permission.

When the tabernacle was built from the instructions in the Torah, the only doorway faced east.  Again in order to come to the entrance of the tabernacle with offerings and sacrifices, man must turn his back to the rising sun and face toward the west, acknowledging the Creator God.

Solomon’s temple copied the orientation of the Tabernacle with the entrance facing east toward the Mount of Olives. Zerubbabel’s temple also faced east, so that a person entering must place his back toward the rising sun in order to enter and make offerings.

But the temples are not simply a bigger more solid version of the Tabernacle.  There are significant differences.  The Tabernacle is a moveable tent that leads the nation of Israel through the wilderness.  In each camp, the Tabernacle is meticulously set up.  The daily, monthly, and annual sacrifices are done in a very small space, that is only accessible to the priests and the Levite class. 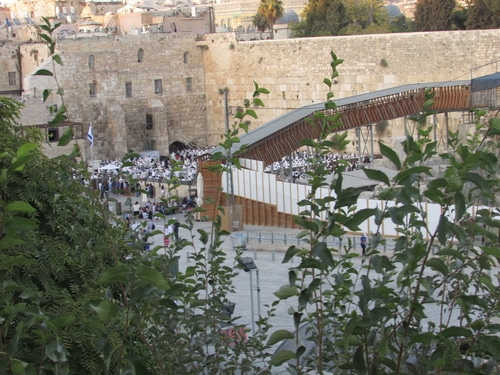 In the building of the Tabernacle, minute details are given in the measurements and placement of each piece of furniture.  The account states that the workmen are anointed by God to accomplish their tasks.  The workman are named.

The Tabernacle is divided into two parts which include the Holy Place and the Most Holy Place.  The worshippers did not enter the tabernacle but remained on the outside.    The tabernacle held the very presence and glory of God.  There were times when the presence was so strong within the tabernacle that even the priests could not enter it.

The tabernacle moves around even after Israel enters Canaan, and is the centre of worship for almost 500 years. Solomon builds his temple around 1000 BCE.  The account doesn’t name the workmen, but says Solomon built it.  The Temple is bigger and shinier than the Tabernacle.  It includes courtyards and porches for the people to stand in when they bring their sacrifices.  It also includes two large bronze pillars, Yakin and Boaz, that are not in the instructions given to Moses.  1 Kings 6, 7 offers a long description of these pillars. 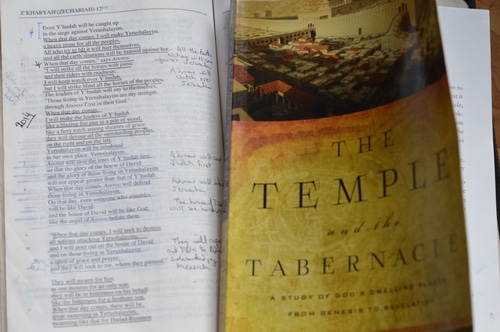 Hays interprets the building of Solomon’s Temple as a negative in the life of the community of Israel.  It is built with conscripted labour, which Hays blames for the civil war and the rift between the 10 tribes of Joseph and the 2 tribes of Judah,  after Solomon’s death.  Instead of several craftsmen chosen and anointed by God for the work, Solomon appoints Huram, the son of a man of Tyre to oversee the building of the temple. The pieces for the temple are done in cast bronze.  The biblical account devotes more space to this bronze work than it does to the furnishings inside the Temple.

The two accounts use different woods.  The Tabernacle is made of acacia, a small desert tree with fragrant wood, while the temple is built of cedar.   Cedar is used throughout scripture to symbolize human pride, self-exaltation, and arrogance.  Further, in payment for the cedar, Solomon gives 20 of the cities of Galilee, with their inhabitants to the King of Tyre.  “The temple of Solomon is not a step forward in Israel’s relationship with God, a supposed improvement on the tabernacle, but rather a step backward.” (p. 87)

While God’s presence indwells Solomon’s temple, it comes with a warning, that obedience is required to maintain the presence with the people.  In Ezekiel God shows the prophet the apostasy of the priests and his presence leaves the temple.  While the Ark of the Covenant, where God dwells, is mentioned in both the Tabernacle and in Solomon’s Temple, the Ark disappears prior to the destruction of the Temple by Nebaccanezer. 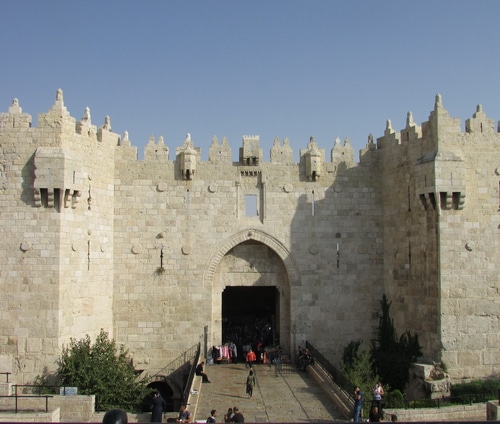 The Temple is rebuilt by Zerubbabel, a descendent of David, in 536 BCE, and dedicated in 515 BCE.  Zerubbabel’s temple is more modest than Solomon’s Temple.  It has no ark of the covenant.  The presence of God is not mentioned to dwell there as it did in the tabernacle and in Solomon’s temple. It seems that there is nothing at all in the Holy of Holies in Zerubbabel’s temple.

Herod’s Temple is so impressive it is considered a great wonder in its time, surrounded by large pillars, store rooms and colonnades.  The disciples marvel at its grandeur and Jesus uses it as the starting point of his Olivet discourse, when he warns them that “not one stone will be left upon another”. 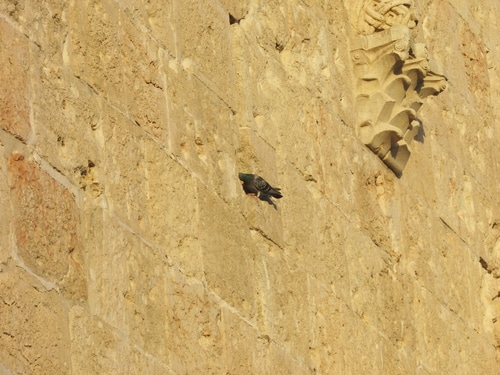 The New Testament foretells the destruction of the Temple in 70CE.  In a shift of theology, Paul instructs that the believer is now the Temple of God and is indwelt by the Holy Spirit.

Hay is strong in his arguments until the very end of his treatise.  But then it falls down.  He fails to distinguish between the church as the believers who are gathered together with God in their midst, and the building where believers assemble.  He incorrectly attributes the power of the Shekinah that was present in the Temple as a presence inside a church building.  Whereas, scripture is clear that the presence of God dwells in each individual believer and not in a building made with human hands.  The New Testament believers met in homes and not in a “church” building. The Greek word “ekklesia” (Strongs 1577), while often translated as “church” means “assembly” and is used several times in Acts 19 to denote an unruly pagan mob. There is no holiness in the word “ekklesia”, as used in scripture.  The assembly of believers is only holy when they “hold to the testimony of Yeshua/Jesus and keep the commandments of God.” 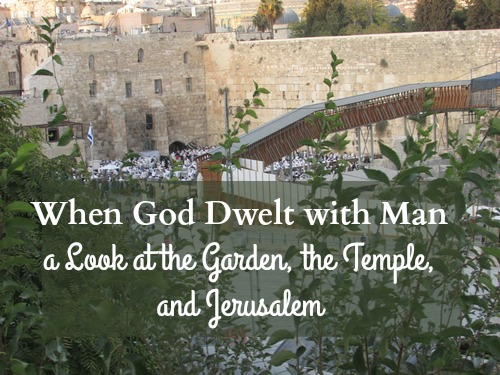 But I believe the real value of this bookis the call to return to the garden.  In the garden there was the daily presence of God walking with the man and his wife.  This is what we need to bring healing and to restore our JOY.  Turn west and enter in.

Disclaimer: I received a review copy of this book from Baker Books.  This review represents my honest opinion of the book. This post contains affiliate links.