I’ve been getting a lot of questions about substituting one ingredient for another in a body butter or lotion bar recipe.  I wanted to give you some guidelines when choosing to substitute ingredients in a skin care or salve recipe.

Each ingredient has a specific role in the recipe and it’s important to understand the role before you try to substitute one ingredient for another. 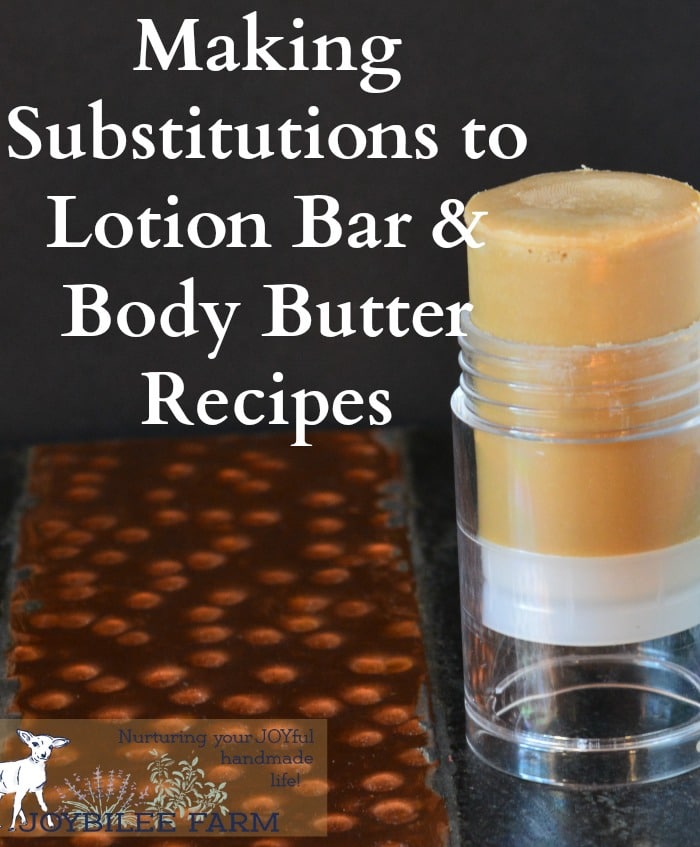 Why substitute one oil for another?

Sometime vegetarians will avoid beeswax, even though no bees are harmed in the harvesting of beeswax.  Others will desire to avoid ingredients that are imported over long distances due to the carbon foot print imposed on the ingredient.  Others will want to substitute an ingredient due to the fear of overharvesting , or the threat to endangered species.

Some ingredients in natural skin care and salve recipes may be outside of your budget.  It’s important to understand if the ingredient is essential to the therapeutic action of the recipe before you chose to leave it out.  If it is an essential ingredient to the recipe, it may be better to choose a different recipe rather than substituting because the recipe won’t be as effective.

Ingredients that aren’t essential to the therapeutic actions of the recipe may be substituted for alternatives that are less expensive.

Beeswax is therapeutic and offers skin care advantages to a recipe.  It is moisturizing, analgesic, and anti-inflammatory.  It adds vitamins and minerals to any recipe it is used in.

Bayberry wax is a good substitute for beeswax.  Bayberry wax comes from the Myrica pensylvanica, or bayberry fruit.  The wax that is extracted by simmering the berries is anti-inflammatory and contains vitamins and minerals.  It is about three times the cost of beeswax, though you won’t use very much in a skin care or salve recipe.

Candelilla wax is another plant-based wax that may be substituted for beeswax on a tablespoon per tablespoon basis. It lacks the therapeutic benefits found in beeswax but will offer a similar texturizing effect.

Substituting butters which are solid at room temperature

Cocoa butter is emollient, soothing, moisturizing and gives an amazing chocolate scent to the finished body care product, moisturizer, or balm.  For those who prefer not to use cocoa butter, shea butter can be used instead.  Both Cocoa butter and shea butter have amazing skin care and soothing properties.  They also texturize lotion bars and body butters giving them more structure, while still allowing them to melt when applied to the body.  Babassu butter is another substitute for cocoa butter and it has its own skin soothing properties.

Mango butter or avocado butter can also be used in the place of cocoa butter.  These butters are made from liquid oils that have been hydrogenated.  They will create a softer final product and behave more like liquid oils in the final balm or salve.

Sheep, goat, deer, or Beef tallow can replace cocoa butter in a recipe.  These generally come with a scent which may need to be masked in the final product, with the use of essential oils.

Coconut butter and coconut oil is sometimes suggested as a substitute for cocoa butter or shea butter in a skin care recipe.  However, coconut oil is quite greasy when applied to the skin.  As a standalone moisturizer it might do in a pinch, but it isn’t a good substitute when mixed with liquid carrier oils which may increase the greasiness and slip of the final product.

When substituting liquid oils or carrier oils you have a lot of leeway.  There is an amazing variety of liquid oils available right in your local grocery store and most of them can be used in skin care products, like lotion bars.  Since any pesticide residues will be concentrated in the oils it’s a good idea to stick with certified organic carrier oils. You’ll also avoid genetically modified organisms if you stick with organic oils.

Specialty skin care oils can be found at soap supply stores, as well as herb stores like Mountain Rose herbs, the Bulk Apothecary, and even in your local health food store.  The prices vary greatly.  Since some of these oils go rancid quickly, choose your purchases from a store or online supplier with a rapid turnover, to ensure that you get the freshest supply.

When making substitutions you’ll want to match the drying qualities of the oil that you are substituting out.  For instance if the lip balm recipe calls for castor oil but you don’t like the taste of castor oil, you’ll see in the chart below that castor oil is a non-drying oil.  In a lip balm it offers slip and shine, as well as body.   You’ll want to use another non-drying oil like coconut oil or olive oil in place of castor oil.  The finished product won’t be exactly the same, but it will have a similar consistency.

I created a free printable of this chart so that you can download it and slip it into a binder so that you can reference it as you are creating your own personal care lotion bars and body butter recipes.  I hope you find it helpful.

This should give you a better understanding of how each ingredient in a lotion bar recipe serves the whole so that you can make substitutions wisely, without a lot of costly and time consuming experiments.

Let me know if that was helpful, in the comments below.

Previous Post: « Beeswax Workshop — Backstage Pass
Next Post: How to Do A Germination Test on Your Seed Packages »