Grandma had a secret in her kitchen that’s missing in many modern kitchens.  The pots grandma used to make pancakes, sauté onions, and simmer her famous soups and stews were cast iron.  Her cast iron skillets and soup pots had a non-stick surface that didn’t peel off like Teflon™, Silverstone™ and other polytetrafluoroethylene coated pots.  Those cast iron pans got better and better every time grandma cooked.   If you were lucky enough to inherit one of grandma’s cast iron frying pans, this is how to bring it back into use, so that you can have Grandma’s secret ingredient working for you, too. 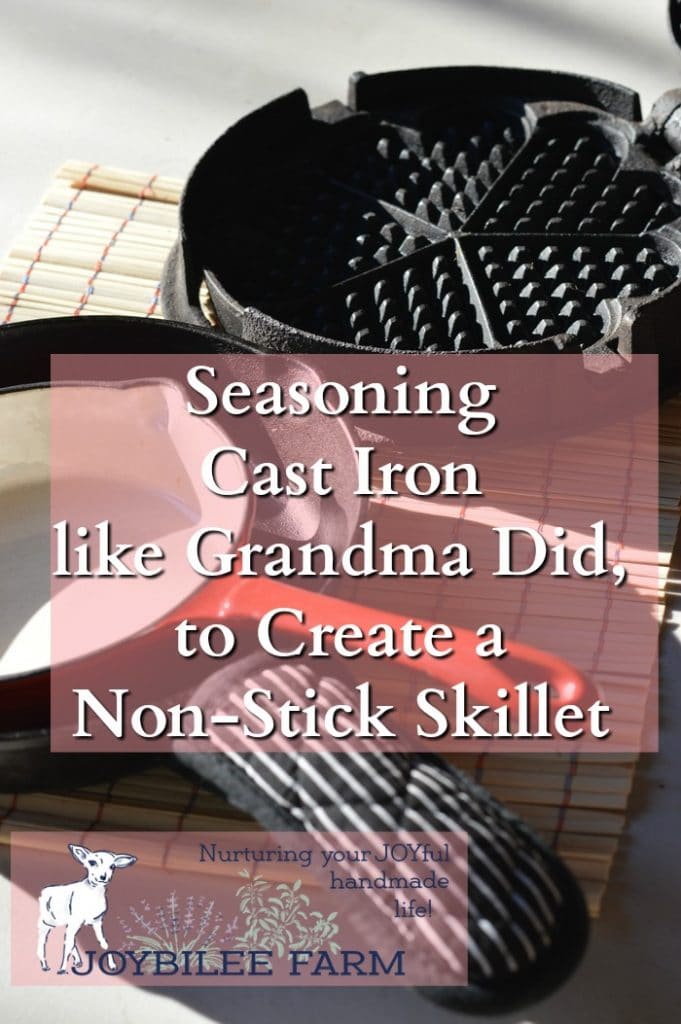 Cast Iron skillets and pans require seasoning to protect the pan from damage and to make cooking and clean up easier.  Seasoning cast iron is easy to do at home and is a necessary home skill for those who are cleaning the toxins out of their home.  A few well-seasoned cast iron skillets and pans can replace the toxic, peeling Teflon™ pots you currently have in your cupboard.  Cast iron is an inexpensive alternative to heavy stainless or tri-ply copper pots, the other choice for even heating and fuss-free clean up.

The more you use a cast iron pan the better it cooks, so don’t leave your cast iron pans on the shelf, collecting dust.  Get them out and use them like Grandma did. 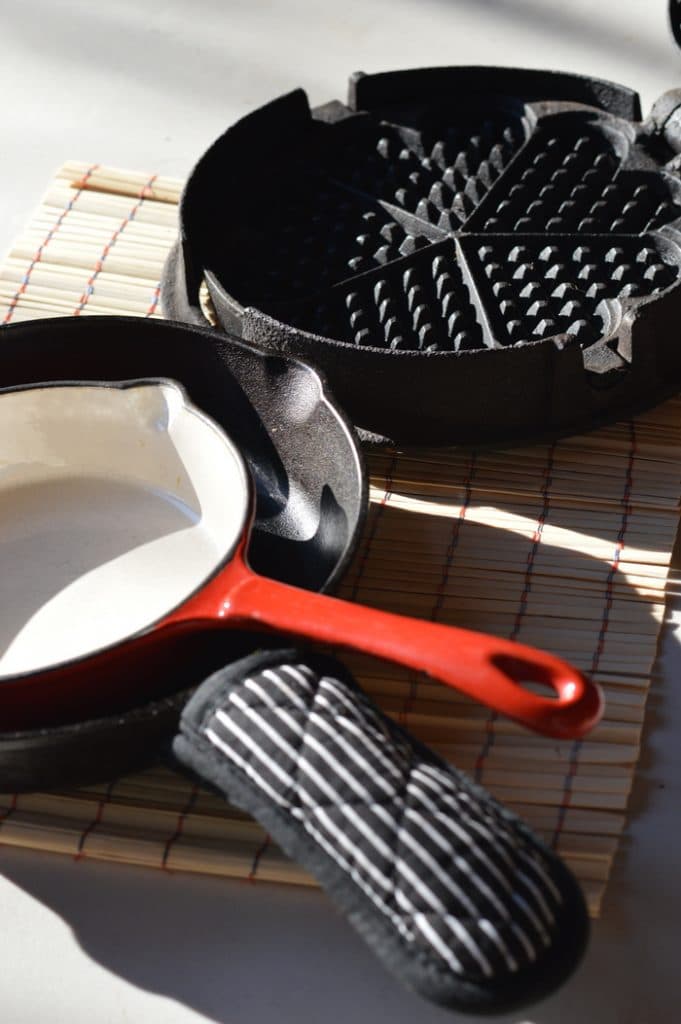 Flat bottomed cast iron pans, have been used since the 1800s when woodstoves were first introduced.  Prior to this legged cast iron pans were used for cooking over an open hearth fire or outdoors.  In the beginning of the 20th century cast iron pans were the popular choice with many manufacturers offering options that ranged from plain skillets in different sizes to specialty pans like waffle irons, pizzelle makers, Æbleskiver pans, bread pans, and corn stick molds.

If you are shopping for a new-to-you cast iron pan, keep your eyes open at thrift stores, garage sales, and antique stores.  You’ll want to go with a price list though, as used pans with no brand markings can sometimes cost more than a brand new pan.

Properly seasoned cast iron pans offer a non-stick cooking surface that makes both cooking and clean up easier.  A cast iron pan can go from stove top directly into the oven, making one-pot meals a reality, and lessening clean up time.  Cast iron heats evenly and holds its heat even after the heating source is turned off, using less energy for cooking.

Cast iron pans don’t require special plastic or silicone non-scratch cooking tools, which when used at high cooking temperatures give off their own toxins into the food.  Stainless steel flippers and spoons or wooden spoons and ladles work well with cast iron pans and won’t damage the seasoned surface. 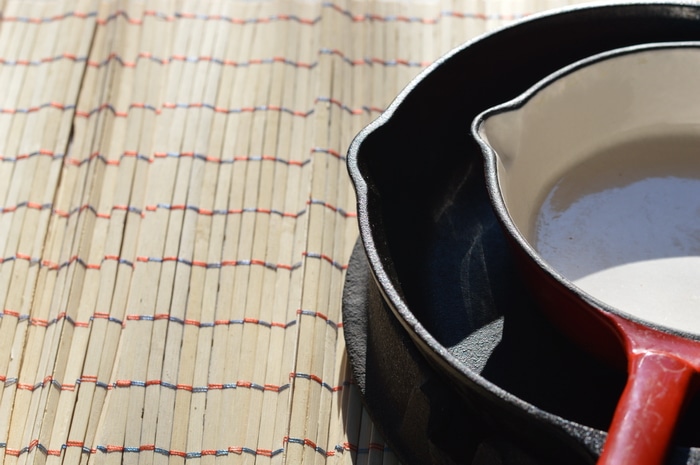 Some people recommend never washing cast iron with soap and water.  However, washing with mild detergent and hot water is fine to remove cooked-on food, provided harsh abrasives are not used. Harsh abrasives can remove the seasoning and may pit or damage the smooth surface of the cast iron.  You won’t need to season the pan again to restore the seasoning after washing, but you should refresh the oil seasoning anyway if food is sticking.

If you need a little more abrasion to remove cooked on food, use salt with coconut oil and rub it across the surface of the pan, rather than using metal scrubbing pads.  Dry the pan thoroughly after cleaning and oil again with cooking oil before you use it again.

Anytime you notice food sticking to your pan, simply oil the pan again and slip it into the oven when you are cooking something else.  Cast iron is really simple to care for, and once you get the hang of it your cast iron pans will last generations, just like grandma’s.

Never do this in your cast iron pan!

Are you ready to toss out your peeling Teflon™ pans and offer your family a nontoxic alternative?  Lodge™ Cast Iron is American-made, and easy to find in the US and Canada.  My local Home Hardware™ store carries Lodge™ brand cast iron pans at reasonable prices.  Lodge is also available through Amazon Prime, saving on shipping costs. 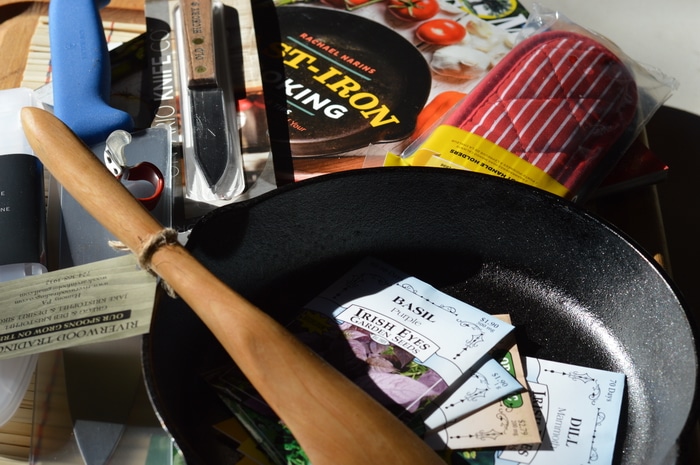 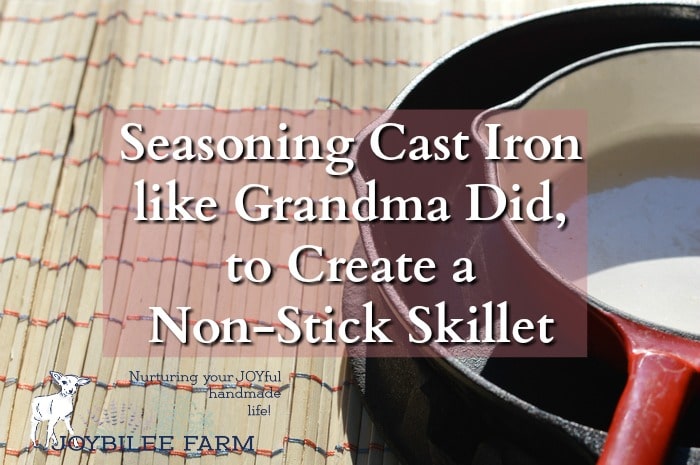 Grandma used her cast iron skillets and pans to make outstanding meals every day.  You, too, can take grandma’s skills for seasoning cast iron and create notable meals.  Remember, the more you use a cast iron pan the better it cooks.  Take your cast iron pans off the shelf and use them to make the meals that make memories.