Create duel sided unpaper towels to replace paper towels in your cleaning arsenal. Save money, save water, and enjoy re-purposing well-loved fabrics with this easy to follow tutorial. Use old towels on one side, for absorbancy, and old flannel on the other for streak-free and lint-free cleaning. Unpaper towels take up no more space in your laundry than a standard facecloth.

Make this year the year you ditch your paper towels. Spend one afternoon and save $100, two trees, and 2,000 gallons of fresh water. Paper towels have a huge negative environmental impact. The paper industry is the third highest polluter of any industry, with only commercial agriculture and textiles coming in higher. 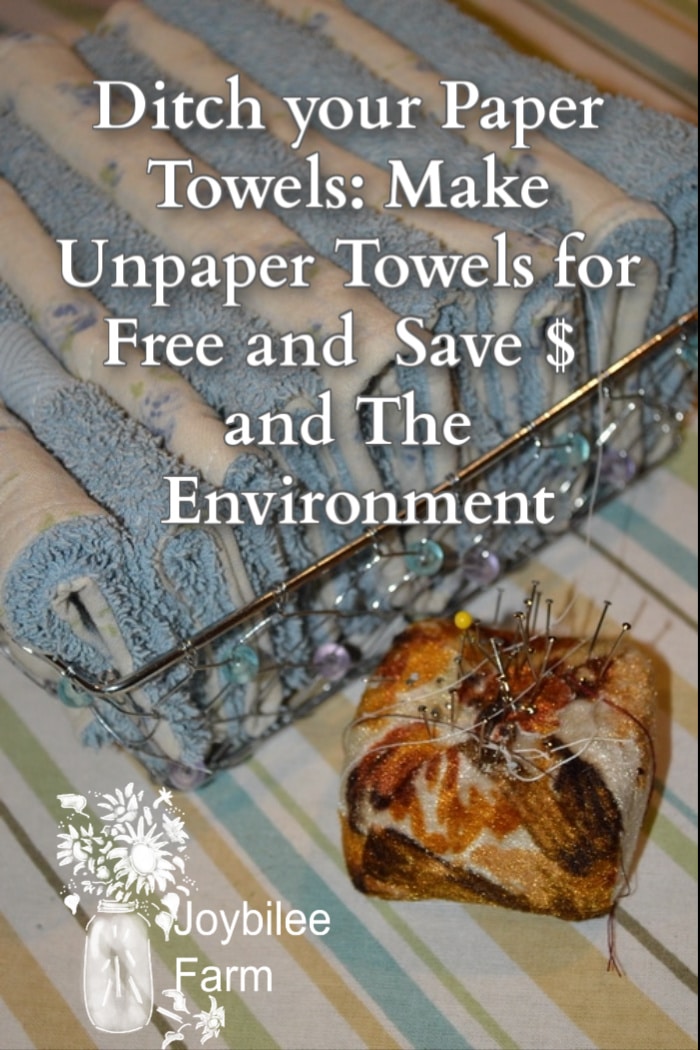 Paper towels are bad for the environment

The average American household uses 100 kilograms (220lbs) of paper towels, tissue, paper napkins, and toilet paper each year – referred to collectively as “tissue paper products”. While toilet paper accounts for the biggest portion of this figure – about 40%, paper towels come a close second. The use of disposable paper towels and paper napkins, make up over half of this use.  It takes 2 trees and 2,000 gallons of clean water to make enough disposable paper products for a family of 4 for one year. Those same two trees will produce enough oxygen for 6 people to breath. Canadian statistics are about half of the American statistics, on disposable tissue paper product use per capita. European usage of tissue paper products is about 1/3rd of American usage – but some homes have bidets, which you don’t see often in North America. 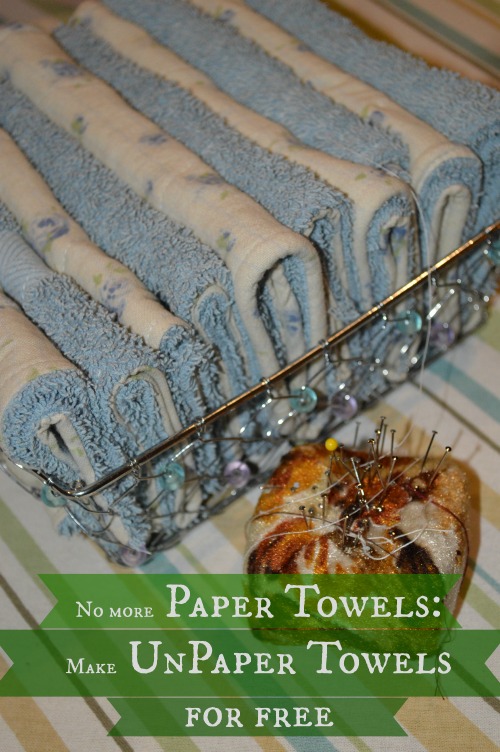 Using paper towels is like throwing money in the trash can

Paper towels are expensive. And you throw them away after a single use. That’s like throwing money in the trash – over $100 a year in fact, for those families that go through just 1 ½ rolls of paper towels each week. A family with a moderate paper towel habit of 1 ½ rolls each week is spending $75 a year on paper towels alone. Those who are still using paper napkins or paper towels instead of linen napkins are spending more on disposable paper products – more like $150 to $200 a year. So changing from disposable paper towels to reusable cloth towels will have a significant environmental impact, as well as an impact on your budget.

Your good green efforts can make a more positive impact if you make your own unpaper towels from upcycled textiles, rather than by buying new cloth towels. As I mentioned above, the textile industry is the second highest polluter of any industry – increasing greenhouse gas emissions, polluting fresh water ways, and increasing pesticide and herbicide use. And then there is the waste problem.

“Americans throw away 68 pounds (31 kg) of clothing and textiles per person each year and we Canadians average about half that, or seven kilograms (15 lbs) of textile waste (clothes, bedding, etc.) annually.” (Looking good in green) Rather than tossing old textiles in the trash, they can be upcycled. By upcycling to make unPaper towels, you decrease both paper waste and textile waste and increase your good green impact, while saving $100 or more a year. Home up-cycling also uses less water than commercial level recycling of paper and textile wastes, even if you have to wash the item in your regular laundry.

I made these unpaper towels in an afternoon using an old thread bare bath towel and a torn flannel nightgown. You can use any 100% cotton or linen textile that you want to recycle. Look at cloth napkins, table cloths, kitchen towels, bath towels, flannel sheets, flannel pajamas, or even well-worn blue jeans. Make at least one layer from a heavier, more absorbent cloth. Cotton and linen are more highly absorbent than manmade fibers and blends. Skip the 100% microfiber textile for this use, and use it instead for your dust mop – where the microfibers will be put to their highest use.

Use a paper towel for the pattern 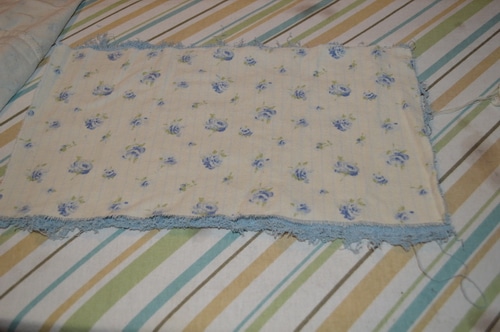 Tear the fabric to size along the grain

Then I used the paper pattern to estimate where the length of the next cut should be. Each half of the towel will make 6 unpaper towels. Rather than cutting the pattern out, I simply make a small cut to mark the tear line and then tore the towel fabric along the grain.

Once I had the towel torn into the right size rectangles, I measured and cut the flannel material in the same way. I just cut through any seams with scissors and tore each piece along the grain of the fabric. While I could have included seams in my fabric pieces, because I used a nightgown and had ample fabric, I was able to cut around the seams. 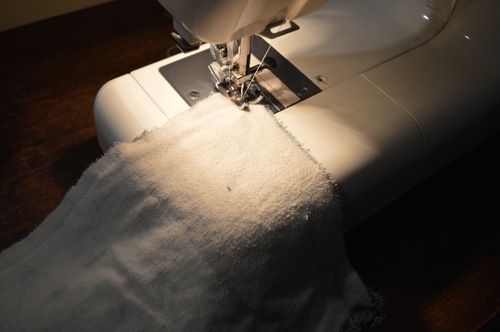 Stitch the two pieces together with a ¼ inch seam allowance

Place the fabric right sides together and pin with straight pins to hold them together. Sew with a straight stitch along 3 sides and ½ of the 4th side, as if you are making a pillow. I used a ¼ inch seam using the right edge of my pressure foot as a guide.   There is no need to serge or zigzag the seams as they will be reinforced in the next step.

This is the sewing machine that I use.

Clip the corners & turn right-side out

Clip the corners close to within 1/8th inch of the seam stitching to reduce the bulk at the corners.

Turn the rectangle right side out and press the seams so that they are smooth.

Fold the open seam to the inside of the pillow and pin shut, ready to stitch. Press this to make it lie flat.

Using a straight stitch, top stitch ¼ inch from the edge, all the way around the rectangle. Because the unpaper towel is two layers, you want the layers to remain together to reduce wear. Quilt stitch the two layers together, using a straight stitch. If you are in a hurry, just stitch them corner to corner on the diagonal, making an “X” in the middle of each rectangle. If you want to be more creative you can stitch spirals, hearts, or even animal designs into the centre of each towel. 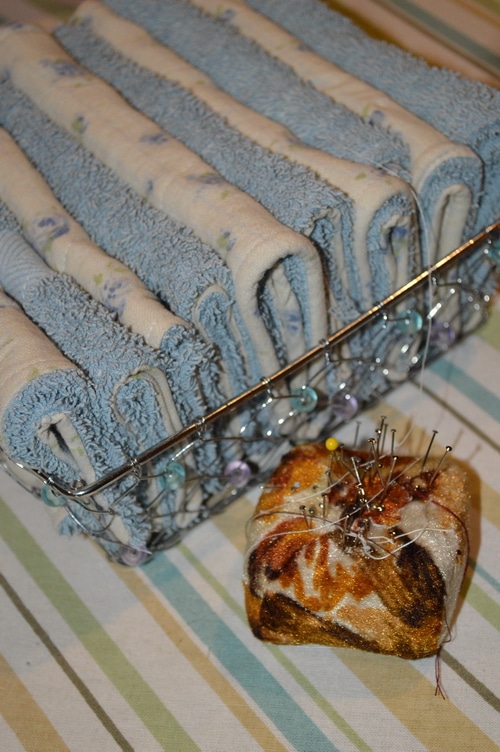 How to store your unPaper towels for use:

If your unpaper towels aren’t placed conveniently in your kitchen you won’t use them. So take a few minutes and strategize how to best place them so that it will be the first thing you grab when you have a spill.

Some unPaper towel makers put snaps on their towels so that they can fit them together around a paper towel holder in the kitchen. Realistically, for me though, I won’t spend time snapping my newly laundered unPaper towels back on the roll, every time I use them. For me a basket makes more sense. So I found a small rectangular basket that holds 10 towels.   It works for now. But I might make another 12 unpaper towels later this week and then I may need to find larger basket. In a perfect kitchen set up, I’d find a way to put the basket on the wall, and off the counter. Maybe a wire CD rack would work? Or a cookie tin? But I didn’t want to await perfection before I shared this tutorial with you.

Some readers protest the idea of using a cloth that needs to be laundered in place of paper that can be thrown away, suggesting that this is an unnecessary waste of water.  My own experience with these is that I don’t do a separate load of laundry just for unpaper towels, but rather fit them in with my other laundry.  They are small and don’t take up any more room than a wash cloth or a tea towel.  I can wash them when I wash other things.  So personally, I don’t do any more laundry than I did before I started using these.  They aren’t like cloth diapers when you have a toddler, where you are doing an extra load of laundry every two days to keep up with the need.  But perhaps you use paper towels more often than I do.  If so, as in everything else, take away what’s useful to you and let the rest go.  My goal is that this post will give you hope and inspiration for a more JOYful and self sufficient life.  That means different things to each of us.

Thanks for reading. I hope you found some inspiration.

If this project seems over the top for you, consider some of the thoughtful comments below on how other people solve the problem of paper waste in their homes.  This is only part of one solution.  There are many others below.  Feel free to add your own ideas for reducing paper towel usage and being more sustainable in the comment section below.

Why Your Family Should Quit Using Paper Towels Immediately

How to Reduce Your Paper Towel Use