Rosemary Benefits for Memory, Digestion, and So Much More
You are here: Home / Eat / Rosemary for Remembrance, The Benefits of Fresh Rosemary and Rosemary Essential Oils
Jump to Recipe·Print Recipe

Rosemary (Rosmarinus officinalis) is a useful culinary and medicinal herb to grow in your garden.  It thrives in dry, hot Mediterranean climates.

As I walk through the streets of Jerusalem I’m greeted by olive trees, pomegranate bushes, roses, and herbs growing profusely in the arid heat.  The sidewalks are littered with over ripe pomegranates that fall from the trees and burst open exposing their red jewel-like pips.  Olives hang green and under ripe in the September sun. But the plant that stands between the trees in sidewalk plantings and courtyard gardens is rosemary.  Rosemary is an appropriate plant to grow in a place where the mantra of “never again” vibrates through the very stones. Rosemary is for remembrance. Rosemary (Rosmarinus officinalis) is a traditional apothecary and culinary herb.  It’s botanical name means “dew of the sea” and it is found throughout the Mediterranean as a hedging plant.

Rosemary is rich in essential oils that stimulate brain circulation, improve memory, and stimulate digestion.  Its volatile oils are anti-oxidant, analgesic, anti-spasmodic, antifungal, anti-inflammatory, digestive, antiseptic, anti-tumor, anti-allergenic, circulatory, cardio-protective, brain-protective, and analgesic.  The plant, in culinary use, is nutritive containing vitamin A and C, potassium, calcium, copper, iron, magnesium, manganese, and zinc.  It has historically been used to treat cataracts, asthma, ulcer, high blood pressure, heart disease, digestive disorders, and infertility.  It’s volatile oils improve both digestion and circulation and this is the basis of its therapeutic benefits. When cooking with fresh rosemary, in order to keep the volatile oils from breaking down in high heat, rosemary leaves are added in the last few minutes of cooking.  Culinary rosemary has been found to improve memory and learning in older adults, improving brain function, digestion, and mood.  Infusions of fresh rosemary in oil or vinegar have been used traditionally to promote hair growth, impede the greying of hair, as well as to aid in muscle recovery after exertions and to inhibit pain.

I use a hair rinse of rosemary infused vinegar after shampooing with homemade shampoo.  The vinegar restores normal hair pH and the rosemary encourages healthy hair while impeding grey. It also improves circulation which encourages health hair growth.

Place ½ cup of the infused vinegar in a glass.  Top of with an equal amount of water.   Rinse hair with the hair tonic after shampooing.  Rub through hair.  Rinse with clear water.

This same infused vinegar can be used as a muscle rub and liniment to aid muscle recovery after exertion and to lessen muscle and joint pain.  It is analgesic, anti-inflammatory, and a counter-irritant that increases circulation. 4 cups of vinegar (white or cider)

Place ½ cup of the infused vinegar in a glass.  Top of with an equal amount of water.   Rinse hair with the hair tonic after shampooing.  Rub through hair.  Rinse with clear water.

This same infused vinegar can be used as a muscle rub and liniment to aid muscle recovery after exertion and to lessen muscle and joint pain.  It is analgesic, anti-inflammatory, and a counter-irritant that increases circulation.

Interestingly when using rosemary, more is not necessarily better.   While culinary amounts of rosemary improved brain function and memory in older adults, studies found that higher doses of rosemary actually inhibited brain function and increased memory response time, a measure of cognitive function in older adults.  Sniffing rosemary essential oil or fresh rosemary sprigs increases memory retention, too, while enhancing mood, and promoting relaxation.   Try infusing 4 to 7 drops rosemary essential oil in a room diffuser to improve alertness and help with concentration while you are studying for an exam. 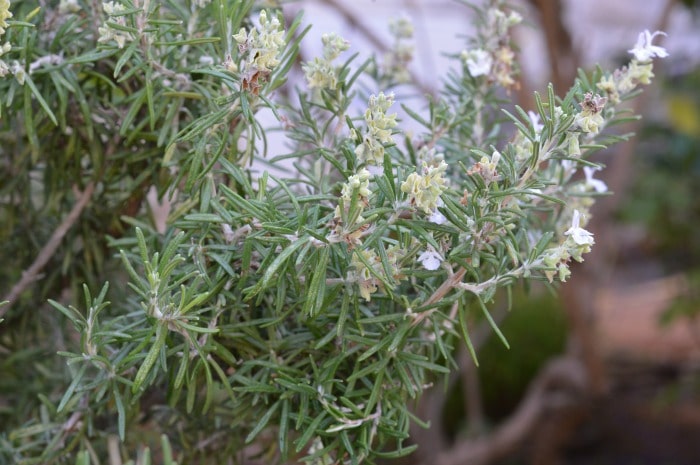 Fresh rosemary contains a higher percentage of volatile oils than dried rosemary.  Similarly to other mint family plants, rosemary’s volatile oils enhance digestion.  Add rosemary in the last 30 minutes of cooking to capture the highest amount of flavor in food.  Try rosemary laid over fish, poultry, or beef.  Rosemary can be added to fat rich soups and bone broth as a whole sprig and then removed just before serving to infuse the digestive-enhancing flavor in the broth.

Dried rosemary leaves should be removed from the stem before being used in cooking.  Add rosemary leaves to bread dough or sprinkle over pizza crust before topping with tomato sauce, meat, or cheese.  Dried rosemary stems can be added to olive oil or vinegar for salad dressings and sauces, too.  Since culinary amounts of rosemary have the highest benefits using rosemary liberally in your cooking is the best way to capture the therapeutic benefits of this prolific Mediterranean herb.

How to grow rosemary

If you live in a climate where rosemary thrives, you’ll be able to grow it as a hedging plant.  Rosemary likes dry, warm climates.  It does well where near the sea and doesn’t mind salt air.  But it doesn’t like to have it’s feet wet.

When growing rosemary in a pot ensure that the pot has good drainage and allow the soil surface to dry between waterings.  In places where the winter has frost, protect rosemary plants from frost damage by overwintering in doors.  For more on growing rosemary see this post. When you consider rosemary think, “Rosemary is for remembrance” and you’ll capture the very best of this amazing culinary and medicinal herb.

Previous Post: « Is it Prepping or is it Homesteading? Answers From the Preparedness Mama
Next Post: Argan Oil Health Benefits Come With a Rich, Nutty Flavor »