Make apple cider vinegar at home using apple cider. Use organic apples if possible, as you are going to use the apple peels too. 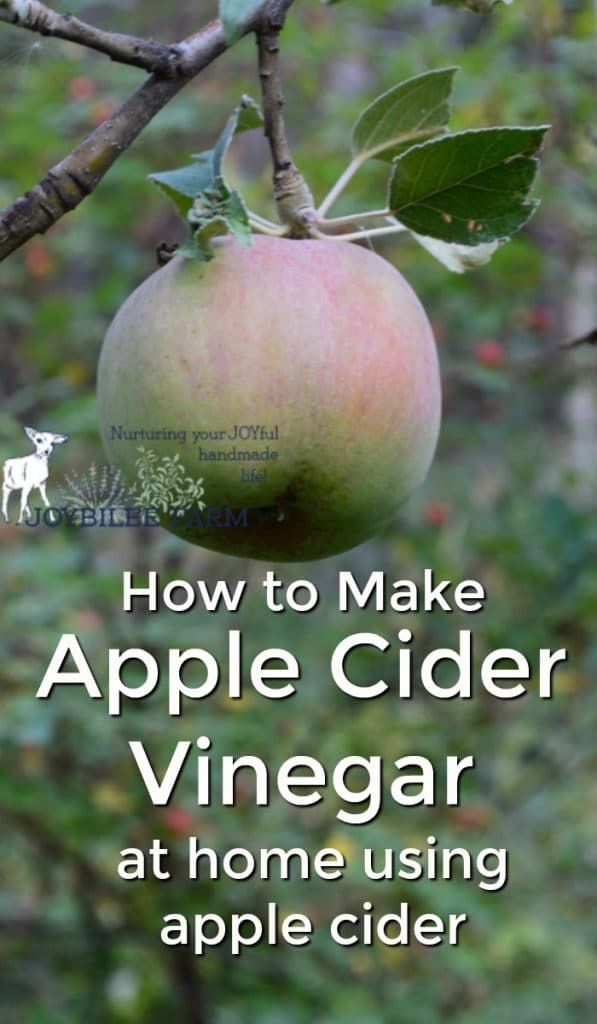 Apple cider vinegar has a huge pile of health benefits that include weight loss, stabilizing blood pressure, control of blood sugar levels, help for arthritis and joint pain, and relief of constipation and IBS.  Those who benefit from apple cider vinegar incorporate it into their diet 2 to 4 times a day.  That’s amounts to a large 32-ounce bottle every week at the cost of almost $10 per quart including shipping.  If you use 3 tbsp of apple cider vinegar before each meal, you can save $10 per week or $520 per year, by making your own vinegar from waste apples, apple peelings, and cores, or homemade apple cider.  And that’s just the savings on the vinegar.  Imagine the savings on health care costs and pharmaceuticals.

Most health food stores carry Braggs brand of apple cider vinegar, which is highly recommended because it is made from organic apples and contains the naturally occurring vinegar mother.

Making Apple Cider Vinegar at home is frugal and self-sufficient

If you have a bottle of Braggs Apple Cider Vinegar, you can make apple cider vinegar at home, and stop forever buying it at the store.  When you make apple cider vinegar at home, you participate in self-sufficiency at its best.  Making ACV at home is frugal as well as self-sufficient since one small bottle of Braggs Apple Cider Vinegar can give you ACV for life — just add apples.  Do you have a wild apple tree in your neighbourhood that the fruit is just falling on the ground?  Ask if you can pick it.  Do you have an apple orchard in your community?  Ask for their cull apples or cider apples.

Making ACV at home uses the smaller, misshapen apples, so you aren’t taking away from the good eating apples in your root cellar.  It’s also a great way to use up root cellar apples near the end of the season before they go bad.

To make apple cider vinegar at home, you need apples, preferably organically grown apples, as you are going to use the apple peels, too.  Or you can use apple cider to make ACV at home.

This method uses 1 gallon of raw apple cider.  You can make the apple cider yourself using a cider press as we did.  Or you can contact your local organic apple grower and request a 1-gallon jug of raw apple cider.  Most apple cider sold in the store has been pasteurized by heat processing, to prevent fermentation.  You can use storebought if it’s all you can find, but you will have to add the correct beneficial bacteria and wine yeasts.  Pasteurized apple cider will not ferment properly because the yeasts have been killed by heat.

Making apple cider vinegar at home is a two-step process.  In the first step the naturally occurring yeasts, present on the skins of the apples, turn the raw apple cider into hard cider or apple wine.  If you are using pasteurized apple cider you will need to add some wine yeast to get the process started — you can use champagne yeast or yeast for white wine.  Don’t use bread yeast.  (mix the wine yeast with some water and wait till it bubbles, before adding half to each wide-mouth jar containing apple cider.)

Cover the jars with a clean cotton handkerchief.  I secure the tissue on the jars using a metal jar ring.  You can use a rubber band.  Some recipes say to use cheesecloth to allow vinegar fruit flies into the mixture.  They will crawl through the cheesecloth and lay their eggs in your fermenting cider.  EWWWW!  No thanks.  You don’t need the hit and miss additions of fruit fly bacteria for your self-sufficiency efforts.  Go with the clean handkerchief, and you won’t have any fruit fly dung or larva in your finished ACV.

The first step in making apple cider vinegar at home is the fermentation stage, where wine yeasts turn the apple cider into hard apple cider or apple wine.  Your apple cider will bubble during this stage, and you will see the formation of fine bubbles on the side of the jar.  If you jostle the jar, the bubbles will rise to the top.  The apple cider will smell like unfinished, harsh wine.  Leave it to work until the bubbling stops.  That indicates that most of the natural sugars (fructose) that are present in the cider have been converted to alcohol.

During this stage the jar may overflow, so keep it on a towel in your cupboard or on your windowsill.  You don’t want to be cleaning up sticky juice off your cabinets and counters.

For this second stage, you will need some vinegar mother.  You can use the SCOBY (the translucent, rubbery disc from another batch of vinegar) or you can add 1/4 cup of unpasteurized vinegar that contains live vinegar mother, like Braggs brand ACV.  I used 1/4 cup of Braggs brand vinegar.  If you don’t have either, you can replace the handkerchief with cheesecloth and take your chances with the fruit flies, you might get good tasting apple cider vinegar, or you might get something else.  Once you have a good-tasting apple cider vinegar, save the SCOBY in a glass jar, moistened with vinegar, in the fridge for your next batch.

Once the 1st stage has stopped its fermentation, add your vinegar mother to the apple cider/apple wine.  Cover again with a clean handkerchief and leave it exposed to air, in a dark cupboard.  It will not overflow at this stage.  Leave it undisturbed for about a month.  It will form a new baby SCOBY  Once the SCOBY has dropped to the bottom of the jar and a new baby SCOBY has formed to completely cover the jar; your ACV is ready.

Taste your DIY apple cider vinegar.  Does it taste as you expect?  It will mellow with age, but it should taste sour, but not metallic or bitter.  If you like the taste, save your SCOBY in a glass jar, covered with 1/2 inch of the vinegar.  Keep it in the fridge for your next batch.

Now pour off the vinegar from your jars into glass bottles.  I just washed and reused my empty Braggs bottles.  They are already labelled.  I left the sludge at the bottom of the jars, along with any poorly formed scobies.  Wash the jars later.  I poured the vinegar off into clean glass bottles and capped it.  The vinegar will improve in flavour if you let it age a few months like wine it develops over time.  Some of the harshness will be removed in the aging process, and the flavour will get smoother.  But you can use it right away, without aging if you want to.

Too many apples? Make cider, vinegar and apple syrup.

How to make apple cider vinegar from scratch

25 Healthy Apple Recipes that are NOT Apple Sauce