Ricardo Cuisine is a Canadian website, magazine, and cooking show that highlights contemporary family lifestyle. The company launched an English version of their popular French cooking magazine, last winter. The company reached out to me and invited me to try any recipe from their website and use it to introduce YOU to what RicardoCuisine has to offer.

This was my first introduction to Ricardo Cuisine, and I was very pleased with the offerings. I flipped through the delicious looking recipes. Any one of them would make a restaurant chef proud. The photography is excellent and inspiring. Each recipe has been triple checked for accuracy.

But I wondered if they would actually work in a real home kitchen. Of course, I chose a lamb recipe for this first introduction. The website had a lot of wonderful choices for lamb and it was hard to settle on just one. There are recipes for lamb shanks, leg of lamb, and several for ground lamb and lamb chops. I settled on this one and then gave it my own tweaks, because that’s how I roll. 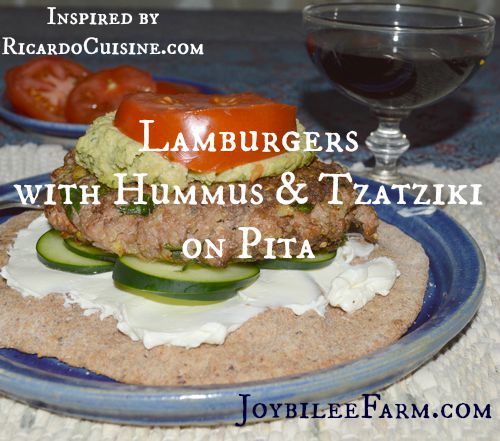 Here’s my recipe inspired by theirs.

Lamburgers with Hummus and Tzatziki on Pita

This is very much like a traditional gyro, donair, or schwarma. A piece of lamb on a pita with hummus and/or Tzatziki. But there is more flavour in the lamburgers in this recipe. And they had a unique way of presenting them.  I think you’ll like their version of this classic dish.  Here’s mine: 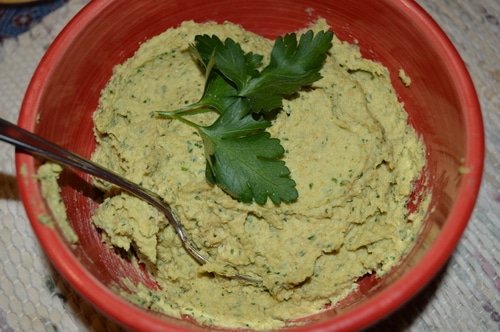 Place quinoa and chia seed in a saucepan with water. Cover with a lid. Bring it to a boil. Turn off the heat. Allow this to sit for 20 minutes. Stir it a couple times while you are waiting. It will plump up and the liquid will be gone.

Mix together the cooked quinoa- chia seed mixture, ground lamb, egg, spices, lemon zest, parsley, and salt. Divide the ground lamb mixture into 3 patties of equal size. Squish them with the spatula so that they are no more than ½ of an inch thick, so that they are just smaller than the pita rounds that you have. 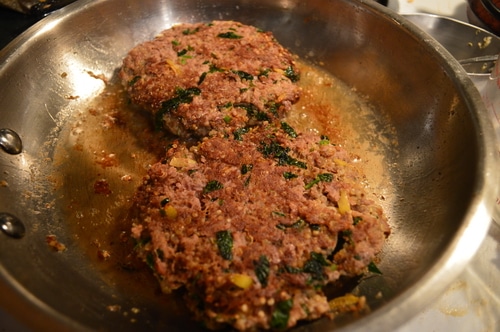 Cook in a frying pan, with coconut oil, over medium heat, or on a grill, until cooked through, about 10 – 15 minutes per side.

In the meantime, prepare the tzatziki and the hummus.   Slice the beefsteak tomatoes and cucumbers. Grill the pita bread to heat it and puff it just before serving. 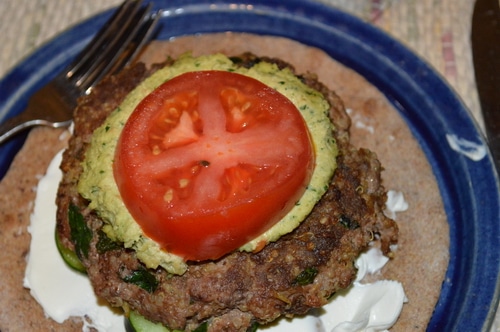 Place a warmed pita round on a dinner plate. Put a tablespoon of tzatziki on the pita, and spread it evenly. Top the tzatziki with cucumber slices. Place the cooked lamb patty on top of the cucumbers. Top the lamb patty with 2 tablespoons of hummus. Top the hummus with tomatoes. Top with more tzatziki and a second pita. Cut this into quarters. The hummus and tzatziki help it to hold together. Put two quarters on each plate. (*Serves 6, this way, from the 3 patties) 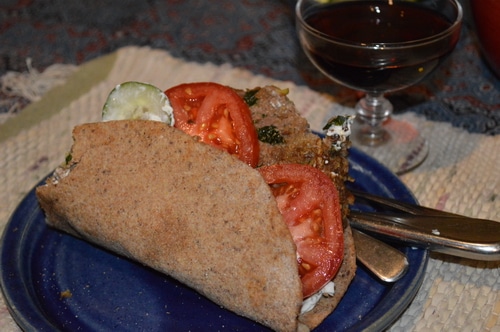 Or for a more traditional gyro style appearance

Cut the lamb patty in half and fold the pita over the meat and filling, taco style. This tastes remarkably like a gyro, my favorite fair food! *Serves 3, gyro-style.

The lemon zest lightens up the heaviness of the lamb and also aids digestion.

Italian Brunello, a deep garnet wine with full body and velvety texture with aromas of leather, cranberry, and the rich ripe flavours of cherry with a hint of earthiness and smoke. 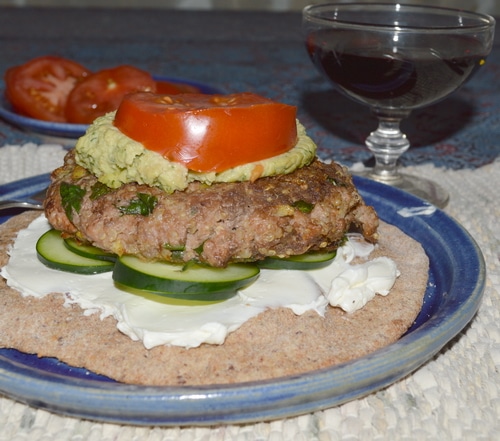 My experience with this recipe from RichardoCuisine

I found the recipe instructions easy to follow. There was a bit of confusion about one of the ingredients, but a quick email told me that “de poivre de Cayenne” was Jamaican pepper, aka allspice. I left it out of my version of the recipe.

I didn’t have a grill to use in my kitchen. So I cooked the patties in a frying pan in coconut oil. A grill would have given them that smoky, charred flavour, that we all love. I used smoky paprika to liven it up a bit. Since we are in the middle of an air quality advisory, due to the wild fires in the area, I didn’t want to increase the problem by firing up the barbeque this week. The next time I try this recipe though, I’d like to use the grill. It was delicious as it was and I’m sure that would make it perfect.

The assembling instructions were a little challenging and I opted to just fold the pita in half gyro style, rather than assemble like a sandwich between two pitas and then cut into quarters. There was no loss of flavour by changing the presentation.

I used quinoa and chia seeds in the place of the bulgur that the recipe called for. I was happy with the substitution and I think it made the burgers more nutritious. Chia is high in omega 3 fatty acids.  I had fresh parsley in the garden and added it to both the ground lamb and the hummus. The lemon zest was just the right brightness to lift the heaviness of the meal. 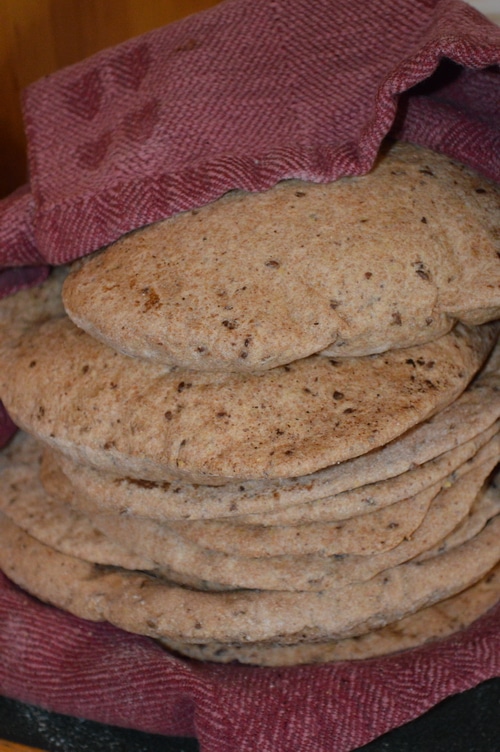 There is no need to buy tzatziki, hummus, or pita bread to make this recipe. You can make these all from scratch and have them prepared ahead of time.  That would make assembling this meal a very quick and easy.  The flavours of the tzatziki and the hummus benefit from being made a day ahead.

I think the ground lamb could use 2 cloves of crushed garlic, in the mixture.  It would bring out the flavour to perfection!

Previous Post: « 6 Ways to Get Live Culture for Your Fermented Vegetables
Next Post: The Easy Way to Make Prunes, and Preserve the Summer Plum Bountry »