It’s easy to grow sunchokes or Jerusalem artichokes and they look pretty in the garden as well as providing food for your family.  But beware, in some climates, they can take over an area, so plant them in an out of the way corner, not in the center of your flower bed.  If you plant them right, you’ll be able to harvest them for many years.

Jerusalem Artichoke is a member of the sunflower family and not a relative of the globe artichoke. It grows in North America from Nova Scotia to Mexico. This perennial plant grows from 6 to 12 feet tall and has yellow, daisylike blossoms.  Sunchokes are rich in inulin, an indigestible fiber that feeds our gut microbiome. 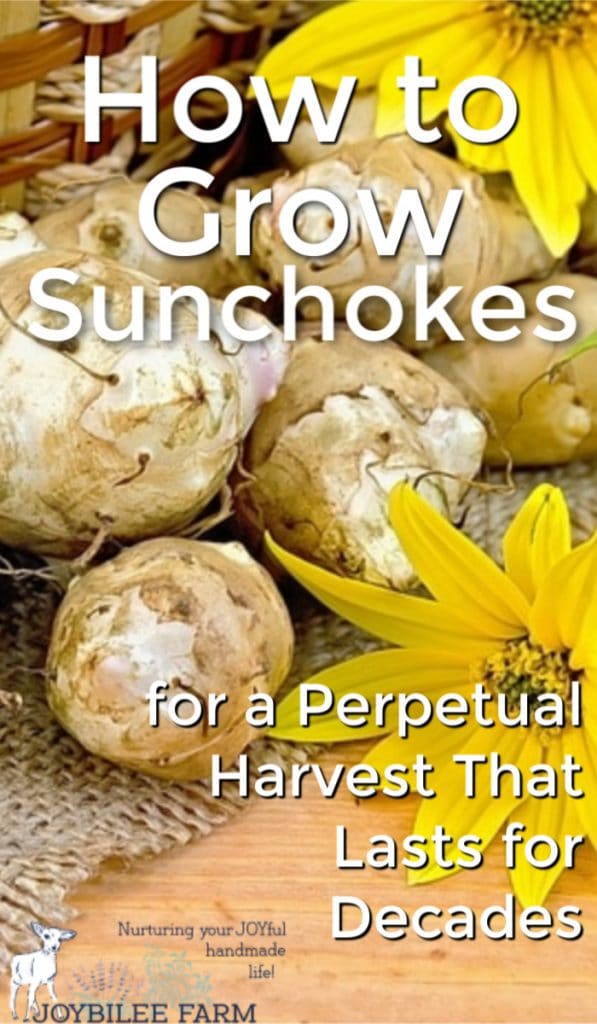 Growing Sunchokes in your homestead garden

The edible part of this plant is the underground root, called a tuber, similar to potatoes and sweet potatoes. In the Sunchoke, these tubers are long and lumpy and look like a cross between a potato and a ginger root.  They contain no starch after harvest and only begin developing starch as they are kept in extended storage.

Jerusalem artichoke grows in zone 2 to 8.  It requires an extended chilling period below 40 degrees F, in order to produce stems after winter.  It can be grown as an annual from tubers in zones 9 and 10, but the stalks will be smaller and less robust.

Select a corner of the garden that gets plenty of sunlight, but will not shade other growing areas. These plants are tall and can act as a wonderful screen, border planting or windbreak. You may find that once they reach their full height they need to be bundled together so they do not fall over in the wind.

Prepare a new sunchoke bed by tilling the soil well and amending with an inch or two of well-composted manure. Plant the tubers 4 to 6 inches deep and 8 to 12 inches apart in a row. Plant rows 18 to 24 inches apart to allow for weeding between the rows.  If you are planting in a raised bed to allow spreading, plant the tubers on 8 to 12-inch centers in a grid pattern over the raised bed. The plants will fill in the empty spaces in future years with new tubers, which will give you plenty of tubers to harvest while leaving some tubers in the ground for the future.

Firm the tubers in well and water thoroughly. Mulch with clean straw to keep down weeds and conserve moisture.

The tubers are planted similar to potatoes. Each piece of a tuber should have one or more “eyes”. which is where the shoots will emerge.  Plant the tuber 4 to 6 inches deep with the “eye” facing up.  Jerusalem artichoke will colonize any area you plant it in. The plants can spread up to two feet in each direction, so planting in rows inside your vegetable garden is often not your best option. Instead, choose a bed that you will let the tubers spread and grow freely.

Once established, watering is often not needed. If there is significant time between rainfall, or you live in a dry climate, additional watering may be required. Be sure to weed your sunchoke patch after the planting, however, once the patch is growing strong, weeds will not get a foothold or be a problem.

How to harvest sunchoke tubers

To harvest sunchokes, you will want to wait until after the first killing frost when the flowers die down. Frost gives the tubers an added sweetness. Using your hands or a spading fork, carefully dig around the tubers to loosen the soil and remove them for harvest. Just like harvesting potatoes, you’ll want to be careful not to damage the tubers with the fork. Expect the roots to have extended from the stalk by at least one foot.

It is almost impossible to remove all of the tubers and any that remain will continue your sunchoke patch. You can leave several of them in the ground to sprout in the next season, or remove them and start again in the spring. If you live in a mild climate, leave them in the ground until you want to use them.

Sunchokes will survive under the snow in winter in zones 3 and above.  In zone 2 or in areas with little or no snow covering, it is best to lift the tubers out of the ground and replant the following spring as soon as the ground can be worked, about the time you plant your spring pea crop.  Alternatively, mulch with 2 feet of straw or weed-free hay, and then remove the mulch in the spring when the ground in the area thaws.

Varieties include Stampede, Fuseau, and Red Fuseau. For the best flavor and success, try to find local varieties that have adapted to your growing conditions. If you cannot find tubers locally, look at reliable seed companies such as Johnny’s Selected Seeds, Burgess Seed Company, Perennial Pleasures Nursery, Gurney’s, or check on Amazon or Etsy.

After the Harvest – What to do with Sunchokes

How to Cook Sunchokes so You Don’t Choke:

If you are diabetic and looking for an alternative to starchy root crops, sunchokes may be your answer. Unlike most starchy vegetables, which turn to glucose in the digestive tract, the principal storage carbohydrate in sunchokes immediately after harvest is inulin rather than starch. When consumed the inulin acts as a prebiotic, that feeds friendly bacteria to your gut. [source] The digestive tract turns inulin to fructose rather than glucose, which can be tolerated by diabetics.

Other ways to use Sunchokes include pickling, roasting them with garlic and chives, and eating them fresh like water chestnuts.

The skin of Jerusalem artichokes is very thin, so take care when handling them to avoid skinning, cuts, and bruises on the surface of the tuber. Sunchoke tubers will start rapid moisture loss once they are harvested, so put the crop in storage immediately after harvest, or leave them in the ground until you are ready to use them. Aim for cold storage areas that have high humidity (85 to 95% relative humidity) and a temperature near 32°F. Under these conditions, tubers can be kept for several months. If the tubers are to be washed, use fresh water sanitized with bleach.

To store sunchoke tubers in a root cellar:

Sunchokes are a reliable source of food for your perennial garden and are easy to grow. Use these 7 Organic Gardening Tips to Maximize Your Garden Yields Now and find a way to add a patch of sunchoke to your garden.

Previous Post: « Make a Rainbow of Natural Dyes with These 5 Weeds
Next Post: How to Grow Rhubarb for a Perpetual Harvest That Lasts for Decades »