Lilla Rose Flexi Clip Review and Give Away 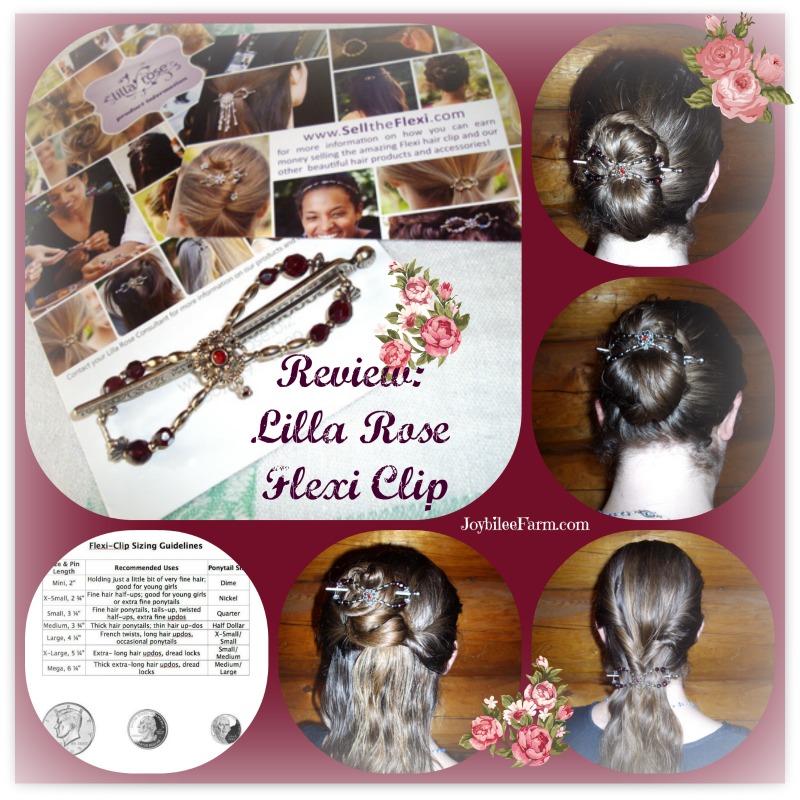 Thanks for modelling the Flexi-clip, Sarah.

Tori wanted to know how the Flexi Clip coordinated with my active, homestead lifestyle.  Sarah and I thought it would be fun to share the Flexi for a month to give it a really good trial run at Joybilee Farm.  Would it hold up to regular use and would we hold up to doing our hair in more than just a simple French braid, our usual hair style?

Tori sent me a large Flexi Clip to review.  The Flexi that Tori sent me was my favorite garnet colour and coordinated well with most of my wardrobe – winter jewel tones of burgundy, jade, sapphire, and black.  Sarah’s wardrobe is from the autumn palette with orange, green, rust, chocolate brown, and scarlet red.  The Flexi was a good accent for her denim and indigo tops, but not so much for the other colours in her wardrobe.  I did notice that the autumn Flexi that is featured in October, “autumn freestyle” would be a perfect match for her wardrobe palette, though.

I received a large Flexi from Tori.  There are 7 sizes of Flexi including an extra large and a jumbo size. 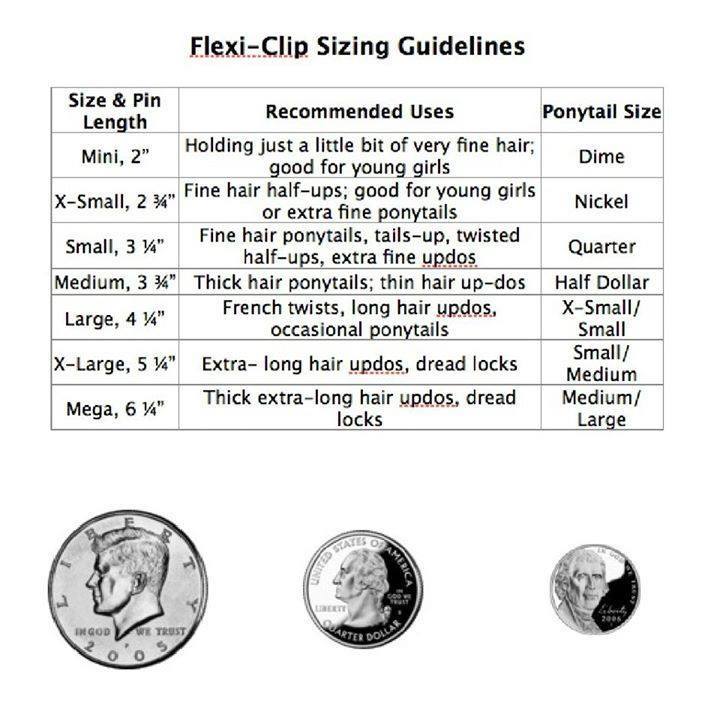 And there is a handy video to watch to help you determine which size is best for the way you like to wear your hair.  You can find the video on Tori’s Lilla Rose website, as well as the Flexi catalogue.

The problem is that most of us like to sometimes wear our hair up and sometimes wear it down, so you might need a couple of different sizes to have the flexibility of wearing your flexi clip to suit your mood.

I’d recommend that if you have hair down to your bum, and you want to wear it pinned up, get the extra-large Flexi for that and a large Flexi for pony tails.  Once you see how pretty they are, you’ll want more than one.

When Tori first contacted me to inquire if I would like to try the Flexi, I didn’t actually know what I was getting into.  I saw Lilla Rose products advertised on Facebook over the years, but I assumed it was just a barrette to make your hair look pretty.  It’s actually more than that.  It is a styling tool that makes hair pins unnecessary — and the pain that they cause for the sake of beauty, unnecessary, too.  The Flexi lets you wind or twist your hair in any style that you like and then clip it with the Flexi to hold it in place.  Once you have secured your hair with the Flexi, you can shake your head, toss your curls, and it will hold it all.  It does this without digging into your scalp the way a bobby pin or a hair comb does.  That makes it pretty comfortable.

How active can you be with the Flexi holding your hair in place?  If you’ve done an up-do or a French Twist and the flexi is the only thing holding it all together, and your hair is super clean and slippery, I’d recommend not going horseback riding.  You are likely to slip the clip.  But if you are just doing normal, light activity, the flexi holds well.  Best of all, if it slips, you can simply twist your hair back up and reapply the Flexi.  That’s easier than working with a curling iron and pins.

The Flexi is a pretty inventive styling tool.  It’s beautiful.  It’s wardrobe coordinated.  And it’s a single piece, so no more searching for the stick to put through the loop that holds your hair in place.  I really like the notches on the pin that hold the Flexi in place.  That’s ingenious! 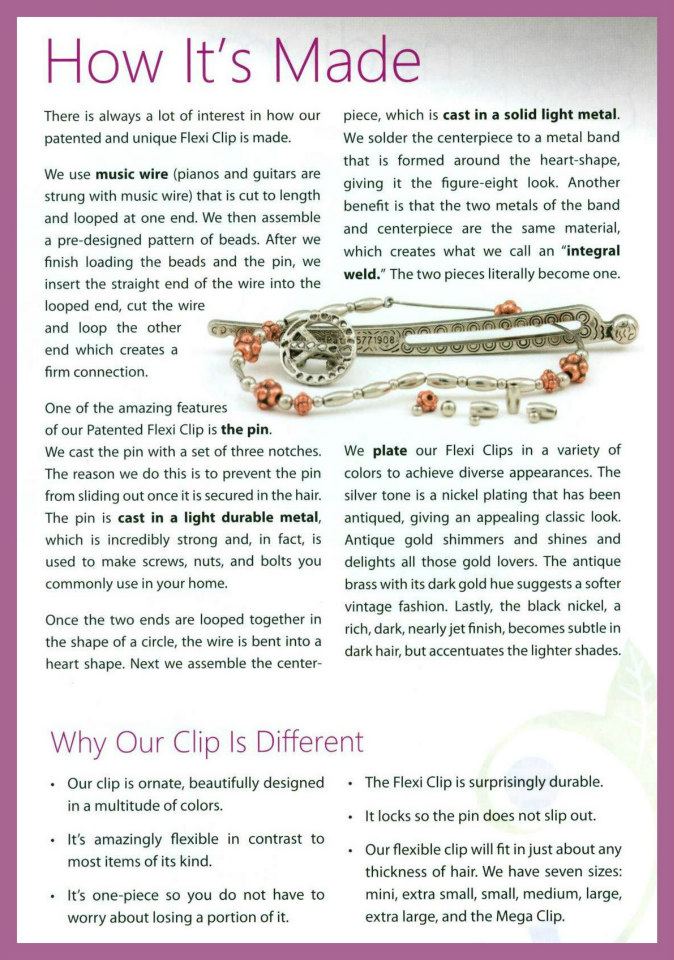 Our trial run with the Flexi

The Flexi that I received, “Simple dangle garnet” was pretty, but the ring holding the dangle, a single garnet bead, caught in my braided hair the first time I wore the Flexi.  The second time I wore it, the ring caught again in my hair and the bead dropped off the Flexi.  So I was left with a Flexi without the dangle.  I actually liked that better, so I didn’t try to put the bead back on. 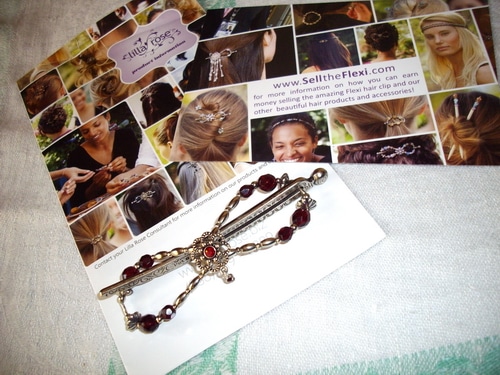 You do need several sizes of Flexi, if you want to alternate your hair style from putting it up to letting it hang down your back.  The large Flexi was too big to use as a pony tail holder, but too small to take a full bun, with no other styling assistance.  It was perfect to make a twisty bun of just part of the hair – both Sarah and I have hair long enough to sit on.  If your hair is mid-length, a large Flexi will be ideal to hold a bun securely for you.  The large Flexi worked for fussy styles, that took some manipulation.  If I French braided my long hair first, I was able to secure a bun with the Flexi, that held, even during our David dance classes.  I received several compliments at dance class when I wore the Flexi clip.  Since I normally wear my hair in a French braid this wasn’t extra effort to pin it up and hold it in place with the Flexi.

There is a pretty French roll in the brochure that came with the Flexi and I did try to style my hair using the instructions in the brochure.  However, working by myself, with my hands behind my head, I was unable to get the Flexi clip straight.  I would clip it straight and it would seem to be holding, but as soon as I walked away from the mirror it would slip.  Then the Flexi would be sitting at a droopy angle at the back of my head.  It probably was achievable if I had help styling my hair, but honestly, that is never going to happen.  That was my only frustration with the Flexi.  Perhaps the extra large Flexi would have been less frustrating.  But I suspect it wasn’t the Flexi clips fault but rather my own slippery hair.

I think a couple hair sticks from the Lilla Rose line of products would have been more satisfactory to make my slippery hair stay in a French Roll.  Then the flexi clip becomes simply hair jewellery instead of a styling tool.

The Flexi is quite substantial – heftier than I imagined.   The pin that is the heavy worker is notched to hold the Flexi when it is under tension, holding your hair in place.  This prevents it from slipping, unless you hair is very slippery and clean.  I’d actually suggest that the Flexi clip does its best duty when your hair is a little dirty, and needs to be put out of the way.  That’s good for this time of year, when you are too busy canning, and getting the garden to bed for winter to bother with your hair. 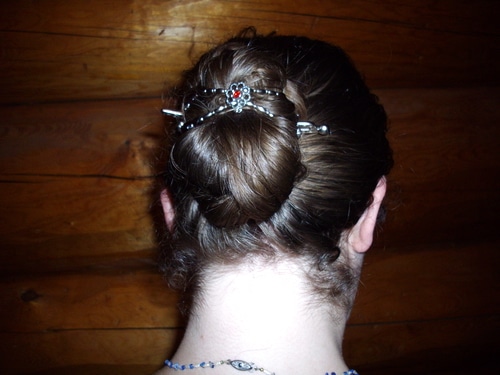 Sarah likes to put her hair in a “messy bun” when she is going out.  The Flexi wasn’t large enough to bear the full support of her hair – she’d need an extra large Flexi for that.  But with the hair anchored with a twisted lock of hair, she was able to pretty-up her style with the Flexi.

The hair styles that worked best for Sarah with the Flexi clip, were styles that took a bit more fussing than she usually has time for.  She’s in her last year at Moody Bible Institute Distance Learning Program, majoring in Women’s Ministry.  So she’s spending a lot of time reading and writing papers these days, and a lot less time fussing about her hair.  The Flexi worked to create a small twisted bun to hold part of her hair in an up-do, leaving the back hair long.  The Flexi was too big to hold a pony tail in place, and too small to make an up-do without help from other pins, with her long hair. 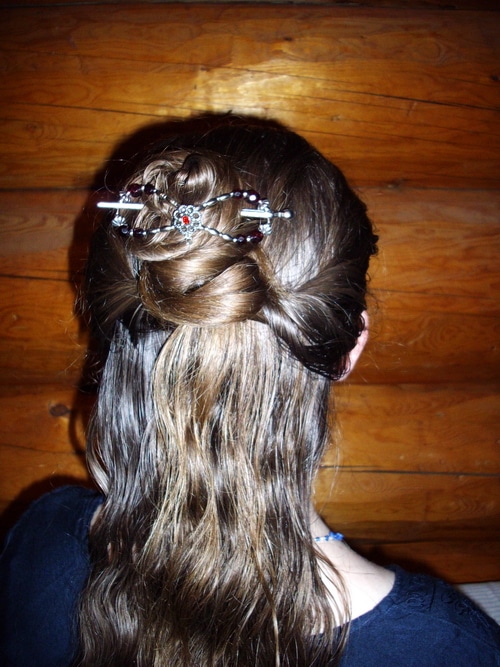 Don’t get the dangley ones if you have an active lifestyle.  While they are pretty, the wires will catch and pull in your hair while you wear it.  And they aren’t the sturdiest part of the clip.

If you have extra long hair, get both a large and an extra large Flexi to give you the option of several styles.

Know, my friend, that you already ARE beautiful.  The Flexi just enhances your amazing loveliness and helps you feel as beautiful as you already are.  If you love playing with your own long hair, and you want to look even more beautiful and stunning, enter my giveaway, and you might just win a Flexi of your very own.  If you really, really love playing with your own long hair and your daughter’s long hair or your grand daughter’s long hair, consider joining Tori as Lilla Rose consultant.  It’s a very tempting opportunity.

A Giveaway that YOU want to win:

Tori is generously opening this giveaway to residents of both USA and Canada (thank you, Tori!)  so be sure and enter.  If you tweet it you can get an entry every day till the contest closes at midnight on November 1st.
a Rafflecopter giveaway

Disclaimer: I received a complimentary Large Flexi-clip for this review.  I was not obligated to give a favourable review, but was asked to give my honest appraisal of the product.  This review represents my honest evaluation of a one month trial of the Flexi-clip by Lilla Rose.