Use wisdom when foraging for mushrooms in the wild, and take into account these five tips and tricks to help your mushroom foraging experience be the best possible. Avoid poisonous fungi, and find the easily identifiable safe and healthy mushrooms.

The hunt for the wild mushroom is epic in BC’s mountains, and probably where you live too. But there is an aura of mystery and danger surrounding the annual forage hikes. Those that are in the know bring home bags of delicious and expensive gourmet mushrooms, to enjoy at home, dry for the winter, or sell to the mushroom buyers around the world at high prices. Those that are uninitiated could die. 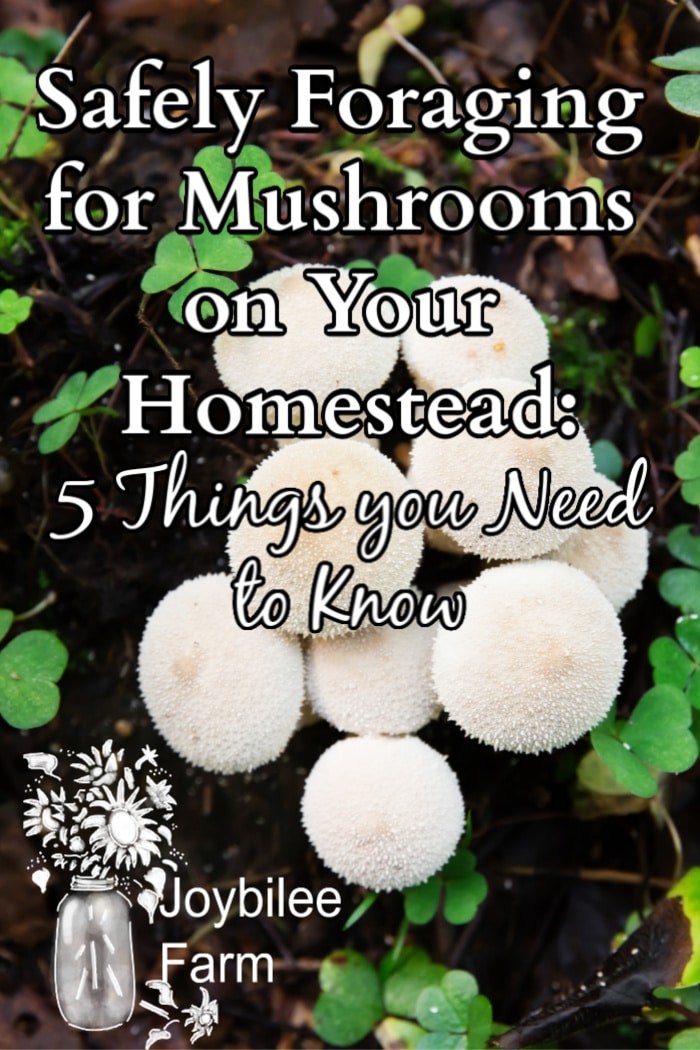 Over the years we’ve looked through mushroom field guides, gone on hikes, even visited with local gourmet mushroom growers. We’ve collected our share of boletes, morels, meadow mushrooms, oyster mushrooms, and chantrels. As homeschoolers, we’ve made spore prints, identified habitat and growing season, and even sniffed the ‘shrooms trying to identify the tell tale scent of a choice edible mushroom. We’ve looked at the field guides warning of “look-alike” poisonous mushrooms and we’ve decided it was too risky to taste one.

Yes, its true. After 10 years of seasonal mushroom hikes and mushroom collections, we’ve never even tasted a wild mushroom. We wanted someone to take us mushroom hunting, just once, to help us identify a good ‘shroom from a bad ‘shroom. We wanted someone to share their knowledge and their secrets with us, the uninitiated, so that we could go foraging for mushrooms with confidence. 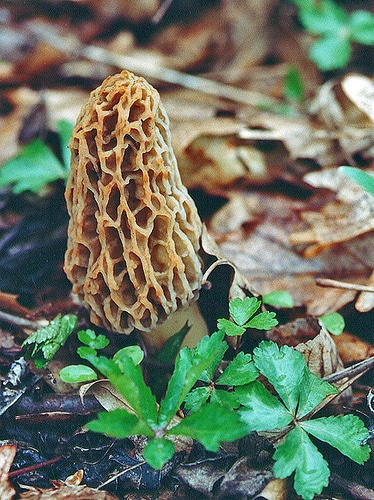 One of the things that makes ‘shrooming more difficult when foraging for mushrooms at Joybilee Farm is that the field guides are published for Eastern North America, and mushrooms colonizes differently in the West than they do in the East. For instance, while morels, a highly textured Spring mushroom, grow on hardwood logs, under alders, and cottonwoods, and in burn sites, in the Eastern hardwood forests, in the West their habitat is different. In the west, where coniferous forests are more prevalent, they prefer disturbed sites, the edges of logging skidder tracks, and near stream beds, under aspen leaf mould. But the books, written for Eastern North America don’t tell you that. And so the uninitiated are left in the dark.

The internet has changed that. Now you can share the knowledge of the experts in the intimacy of your own computer work-space. The experts via You-Tube, blogs, and businesses can teach you where to find mushrooms, what good mushrooms look-like, the tell-tale features of the poisonous mushroom look-a-likes, what season of the year to find them, and even how to inoculate saw-dust or coffee grounds to propagate your own mushroom garden on your homestead, taking the spores from the wild.

1. Know how to identify the trees and the environment in your area.

Identifying the trees in your area — knowing the difference between a Trembling aspen and a Cottonwood, for instance, can help you identify the mushrooms growing in the leaf mold or on the stumps and downed trees in your area. You should be able to identify a tree based on the location and the bark, not just by the leaves and catkins or cones. Many trees are still leafless, when the first mushrooms appear on your homestead.

Invest in one or two field guides that are specific to your region before you venture out foraging for mushrooms.  Don’t rely on library books here, because you want them handy to your finger tips when the weather is perfect for ‘shrooming.  Get the book, not the Kindle edition.  The pictures don’t show up well in the Kindle edition and some Kindle editions are incomplete.

Here’s a few that I use:

Plants of Southern Interior British Columbia and the Inland Northwest

Trees of the Northern United States and Canada

Mushrooms and other fungi have a symbiotic relationship to certain species and will colonize only in favorable conditions, where that species is prevalent.  While the look-a-likes often colonize in the same area but on different species, knowing the trees in an environment will help you make a positive identification.

In the following video the Urban Farm Guys go Morel hunting and show you the environment in which to find several different kinds of morel mushrooms.  They wrongly identify a trembling aspen leaf as a cotton wood leaf, in the video.  Both cottonwoods and aspens prefer moist areas and so you will often find them together.  But its important to be able to identify the tree, especially if a stump is colonized with mushrooms, rather than the ground around the stump.  Know the bark of your local trees.

2.  Familiarize yourself with the growing season that your mushroom is normally seen.

Morels are found in the Spring.  Chantrels are a fall mushroom.  Every mushroom has a specific season that you will normally find them in your region.  Things can get complicated if you live further North or at a higher elevation than the Field Guides mention.  And things can be different in the West than they are in the East.  So it helps to keep a journal of when you find specific mushrooms in your area.

We found yellow morels last year just as the Trilliums were blooming in our area, which was a full month later than everywhere else on the continent.  Already people in the East and Midwest are reporting finding morels.  We still have 2 feet of snow (“Always winter and never Christmas!”).   Go on a few mushroom hikes this season and make a note of when you find different mushrooms — even poisonous mushrooms.  Even knowing when the bad mushrooms appear can help you anticipate when you’ll begin to see the choice mushrooms and help you correctly time your mushroom foraging. 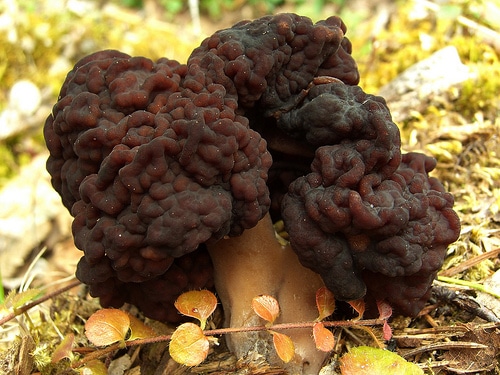 3.  Get a mushroom field guide with excellent pictures and read it.

I have two mushroom field guides.  One has horrible pictures, taken with poor lighting in the shade of the forest.  The pictures are blurry and the color is filtered through the leaf canopy, so you can’t see if a mushroom is tan or red.  Make sure your field guide has well lit pictures and study the difference between a good mushroom and its poisonous look-a-likes.

In order to identify the choice mushrooms in your area you will need to understand some of the key ways that mushrooms grow and reproduce.  You’ll need to observe whether the gills are attached or detached, for instance.   Or even whether the mushroom has gills, like the grocery store mushroom or if it has pores like a bolette.  What is the shape of its cap?  Does it have a stem?  Is the cap attached to the stem or detached?  Here’s some of the key traits of various mushrooms that will help you become more familiar with mushroom terminology. The more familiar you are with the mushrooms you want to find when foraging for mushrooms, the easier it also is to identify the ones you don’t want.

Some mushroom field guides that I recommend:

Mushrooming without Fear: The Beginner’s Guide to Collecting Safe and Delicious Mushrooms

4.  Learn how to make a spore print

Mushrooms reproduce by spores rather than by seeds.  Spores colonize wood chips, leaf mold, and downed logs and in the right conditions grow up.  Mushrooms can grow from just a nip in the log to a full 4 inch mushroom in a matter of 3 or 4 days.  Once the mushroom is past its prime it opens and shoots its spores around the area, recolonizing the growing medium.  As long as the nutrients in the growing medium hold up, the mushrooms will continue to grow there.

Here’s an article on how to make a spore print from the Mushroom Expert.

5.  Be familiar with the fragrance of the choice mushroom that you are hunting.

Many field guides mention the smell of the choice mushroom as opposed to the smell of its look alike.  Choice chantrels for instance, are said to smell like “apricots”.    White field mushrooms smell like the mushrooms you buy in the store.  Know what the mushroom is supposed to smell like before you taste it. Also be aware that the ability to smell certain scents is hereditary.  Not everyone can smell every scent.  Learn to recognize the scents that you can identify and get your mate to smell the ones you can’t.

All wild mushrooms should be cooked before you eat them.  Don’t sample mushrooms in the field.  Even choice mushrooms can give you a stomach ache if you eat them raw.   Although expert mushroom hunters tell you to identify a mushroom by taste, I would leave this to the experts.  A tiny amount of some mushrooms contain enough poison to seriously harm you.  Always identify a mushroom before tasting.  Here’s how one expert tests the smell of a mushroom, no matter what the species.   You can learn from his experience because he generously wrote it down:

Some people cannot detect certain odors; I can’t smell the “phenolic” odor in Agaricus species, but I can sniff out “farinaceous” from yards away. Experience will tell you which odors you are best at detecting.

“Not distinctive” is probably the most common mushroom odor, but distinctive smells include:

Many thousands of ‘shroomers are heading for the hills to gather wild morels in the next few weeks.  You can confidently be one of them if you inform yourself of the habitat, season, growth habits, spore identity, and smell of the morels that you are looking for.   To insure your success, check out pictures of both choice morels and poisonous look alikes before you head out.  Choice morels have a honey-comb patterned and textured cap, while false morels have more of a brain texture, with haphazard patterns.   While last year we picked morels on our homestead, identified them, spore printed them, and smelled them, this year we also plan to eat them, having gained confidence with our efforts to master the morel. This is key in foraging for mushrooms, your first trip, or season, goals should be to simply identify the mushroom, the next trip or season you can enjoy them.

If all this is too much risk for you, or you don’t live in an area where mushrooms are abundant, consider growing your own mushrooms.  Oyster mushrooms can be grown in coffee grounds.  You can start with an Oyster Mushroom kit and grow your own on the kitchen counter.  Growing mushrooms from a kit is a gateway to getting out in the woods and finding them in the wild, or beginning your own permaculture mushroom patch.   So take the first step today, and begin to enjoy natural, mushrooms.  You might even save the world.

The Mushroom Cultivator: A Practical Guide to Growing Mushrooms at Home

Where are you at in your mushroom foraging?  Are you a beginner or an expert?  Tell me one ‘shrooming adventure that you’ve had and what you learned from it.  Thanks for sharing.

Previous Post: « Growing Squash to Feed Your Tribe Through the Winter
Next Post: How to Make Beeswax Food Wraps So You Never Need Plastic Wrap Again »