Whether you are raising llamas or alpacas on your homestead or you just have a few llamas as livestock guardians, you need to be aware of the danger that the common deer tick can pose to your camelids.  A tick can harm a llama or alpaca.  A bunch of ticks can kill a llama or alpaca.  While other livestock don’t seem to be bothered much by tick paralysis, llamas and alpacas are particularly susceptible.  However, armed with knowledge you can save your llamas and alpacas from this common Spring parasite disease.

Tick Season on your farm

Tick season goes from May 1st to the end of June at Joybilee Farm.  The season will vary where you live, but tends to go from after snow melt till the dry heat of summer comes.  While the tick life cycle has many stages, only the adult stage is of concern during this time.  Adult ticks climb up grass and plants in your homestead pasture and hold up their legs, sensing or looking for prey.  They have special organs located on the first pair of legs, called Haller’s organs, that detect carbon dioxide.  When a warm blooded animal walks past, the tick crawls onto their legs and begins crawling up the body in order to attach to their “host”.  Once attached the female engorges herself with a blood meal over several days and then drops off to lay her eggs on a leaf.  She will lay 1000 to 8000 eggs.  A tick’s life cycle spans a year and the most dangerous part to camelids is the last couple of months.

Tick paralysis in llamas and alpacas

While ticks are a vector for disease, and implicated in cases of Lyme disease in humans, this article focuses on the problem that ticks cause to llamas.  In May of 2008 two of our llamas started acting uncoordinated.  They staggered when they walked, acting almost drunk.  By the end of the day they were sitting in normal llama position but were unable to stand up.  By the next morning their necks were stretched out on the ground and they could not lift their heads.  We thought they were dead, but on closer examination, they were still alert.  They could flutter their eyelids, although they could not rise.  One was a robust male, the other a yearling female.  None of our other llamas were affected.  On close examination, ticks were found on the bodies of our llamas.   After carefully removing the ticks, the llamas were back up on their feet within 48 hours.  Our Male had 27 ticks and the young female had 15 ticks.  This was a serious tick infestation.

Our neighbour, down the road, lost several llamas that Spring.  She never checked for tick infestation.  The paralysis progressed to death.  Its a shame that she didn’t know that llamas and ticks don’t do well together.  Had she checked her animals and removed the ticks she would have saved their lives. 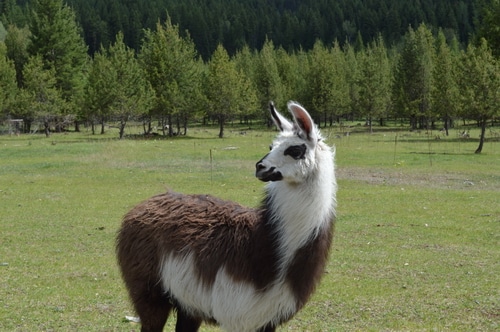 Ticks generally attach on llamas on the neck, behind the ears, and in the dark between the hind legs, up in the groan.  Our llamas will come to us if a tick attaches to them, so that we can check them.  Not all llamas will let you know.  Injecting Ivomec can inhibit the ticks, somewhat, but anti-parasitical drugs are not a substitute for regularly checking for ticks and removing them. In an especially severe Spring, we will use Ivomec as a preventative to make our llamas inhospitable to ticks.  Check with your vet, if you choose to use an anti-parasitic drug, like Ivomec.

Its better on the animal to check regularly for ticks in May and June (or when your tick season is) rather than waiting for tick paralysis to set in.  Once the animal is on the ground, recovery may take a few days.   If you find a tick on your llama or alpaca (or any other animal or human) if it has not yet attached, you can safely remove it.  If it has attached and is engorged don’t try to pull it off the animal.  You will decapitate the tick and leave the head and mouth parts behind in the host.  This can cause disease, infection, and tick paralysis.  Instead, you want to convince the tick that it would be better to back off.  You want to make the environment inhospitable to the tick.

Tick removal from a llama or alpaca is straight forward.

Get a helper if you can, to steady the animal. Halter the animal and secure a lead in the halter.  Tether the animal to a tree or wall in order to minimize its movement.  You will want it to keep still while you deal with the tick.  You will need two hands to successfully remove the tick. Have your helper hold the animal gently and talk reassuringly to it.  You want to prevent the animal from rearing up, lurching, or making sudden movements while you are applying heat to the tick and attempting to remove it.

2.  Rubbing alcohol in a jar with a lid

Have a jar of rubbing alcohol handy to immerse the tick once you have removed it. This will smother the tick and kill it decisively.  You don’t want to drop a live tick on the ground and allow it to lay eggs.

3.  Get a reliable flame

You can use a lighter, a candle, or a match.  Make sure the flame is secure and won’t fall into a pile a dry tinder, pine needles, etc, if the llama suddenly lurches and knocks it over.  I used a candle secured in the bottom of a can, on a table away from the llama, so that it could not be accidentally upset. 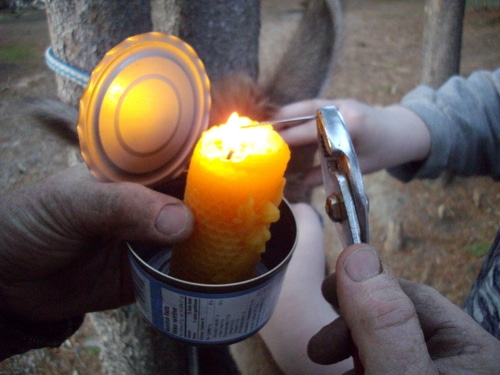 You need a piece of steel that will hold the heat from the flame for several minutes, yet still fine enough to touch the tick without burning the llama. You will use it to apply intense heat to the back of the engorged tick so that it backs out of its host.

5.  Steel pliers to hold the needle.

You don’t want to burn yourself when you are heating the needle.  Hold the needle to the flame with a pair of pliers.  Use them also to hold the needle to the back end of the tick.  It takes a bit of practice to get this right but once you’ve gone through a few tick seasons with your llamas and alpacas, this will be less awkward. 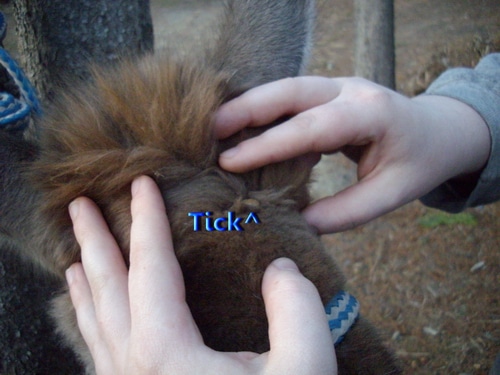 Removing a tick from a llama:

Now you are ready.  Your llama is secure. You have a helper to steady the llama and talk reassuringly to it.  Hold the needle or nail in the flame using the pliers to get a good heat into the steel.  Apply the end of the heated needle to the back of the tick, and hold it there until the tick backs out of the host.  Wearing a glove, grab the tick with your other hand and immediately immerse in alcohol.  The engorged tick will not bite your hand, so you can do this methodically and carefully.  Check for other ticks.  If you find any, apply the same process to them.

Dealing with tick paralysis in llamas

If you actually have a llama with tick paralysis, its very important to remove every single tick from the animal.  If your llama hasn’t been sheared, shear it right away, but try not to clip off any ticks.  Don’t worry about saving the fleece.  This is a veterinary emergency.  Time is of the essence.  You will be more able to check for ticks if the animal has a short coat.   We try to have our llamas sheared in mid-April, as our tick season begins at the beginning of May and this ensures that our llamas are easy to check for ticks, when the need arises.

Be sure to check and double check for ticks.  Your llama will need to have every tick removed in order to recover fully from tick paralysis.  If your llama goes down with tick paralysis, don’t wait until morning to remove the ticks.  Tick paralysis can progress quickly to death, so immediate action is necessary.  If you live on a rural homestead, its likely that your vet is a few hours away and you don’t have time to wait to remove the ticks.  Get them off now.

Once the ticks are removed, you should begin to see recovery in your animals.  Llamas that were stretched out on the ground with tick paralysis will lift their heads and sit in a more normal llama-like position.  It will be 24 to 48 hours before they are back on their feet, though. They should be protected from predators, and inclement weather during this time.  Any wounds from the ticks can be treated with tea tree essential oil, sprayed generously on the injury, to minimize infection and reduce irritation.  The animals won’t be able to drink at first so don’t force them.  A vet will give them IV fluids to support their recovery.  If you offer a pail of water near them and a flake of hay, they will begin to eat as soon as their rumen begins working again. Don’t try to force feed fluids before the paralysis is lifted or you could drown your animal.

Tea tree oil can also be sprayed on the legs and along the top line of your llamas and alpacas to make them inhospitable to the ticks.  I use a 10% tea tree/olive oil solution in a glass spray bottle. (10% is 250 ml olive oil and 25 ml tea tree oil.  Shake well before spraying on your animal)

Tea tree essential oil as well as applicator bottles can be purchased from Rose Mountain Herbs. 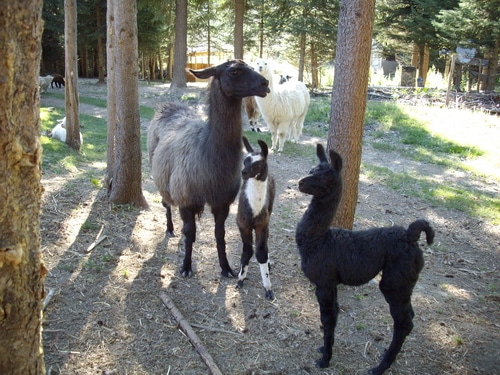 This is part of a series on Homestead herbal medicine in the barnyard.

Part 1:  Before you call the vet:  3 easy steps to get a new born kid or lamb on a bottle and save her life

Part 2:  No time to call the vet:  Dealing with hypothermia in baby goats and lambs on your homestead