You are here: Home / Heal / 3 natural ways to help a lamb with a broken leg mend

Natural help for a lamb with a broken leg

A month ago we had a day old lamb come in the house with a broken leg. It was a clean break, just below the knee joint of his left hind leg. At a day old, common farm wisdom says, “he doesn’t stand a chance. Put him out of his misery.” But our adage is, “if there’s breath there’s hope” so we weren’t about to put him down, without doing our best to help his little body heal itself.

His injury meant that he couldn’t feed on his dam and he would become a bottle baby. This was a good thing, as his dam didn’t seem to have much milk and he was a twin. It also made it easier to treat his injury with herbs. 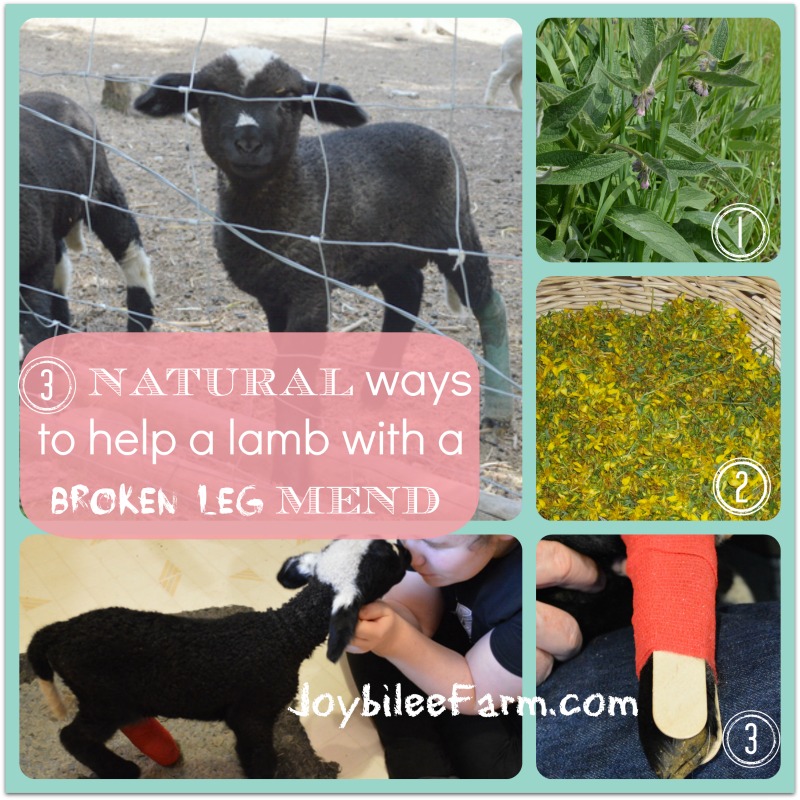 Observation is your best help in accessing an injury

Sheep are prey animals and one of their survival skills is to be very quiet when in pain or injured. Goats are prey animals, too, but this is one area of difference between sheep and goats. If we hadn’t been paying attention we wouldn’t have noticed, by his behavior, that he was injured. One minute he was under his dam feeding and the next minute he was quietly lying down, and quite subdued. He refused to stand on the broken leg. I discovered the break, while feeling up and down his leg to find out why he might not want to stand on it. Poor lamb. The break was a clean break, 1 1/2 inches below the knee, that allowed the bone to move at right angles to the itself. Ouchy.

I just started the Intermediate Herbal Course with the Herbal Academy of New England. I was on the very first unit, in fact. With that unit, a review of using herbs, came a “flip book” with lots of recipes for making tinctures, decoctions, and infusions – a treasury of herbal basics.   While there wasn’t a specific recipe for healing broken legs in lambs, it encouraged me.

Looking at the situation like an herbalist, the lamb needed:

Even though, “Comfrey,” had a mother, we separated him from his dam the first day. He wouldn’t be able to compete with his twin brother for milk, and by bottle feeding him, we could be sure that he was getting adequate nutrition to encourage healing. It also made it easier to give him herbs.

The lamb needed something for inflammation, that also took away pain. He also needed something to help the bone heal. At just a day old, he didn’t need anything too powerful, that would put him to sleep, as he needed to keep eating his milk in order to heal properly. And he needed the injury to be stabilized so that it could begin to knit back together.

I looked through what was growing in the garden and the tinctures that I had already in my herbal apothecary. Decoctions are quick to make – like making tea – and if you have the herb on hand in either fresh or dry form, you can have its medicinal qualities available in a few minutes. Tinctures or infusions, on the other hand, can take weeks to make as the herb needs time to fully infuse in the menstrum, the liquid used to extract the medicinal properties.

It was the beginning of May and the garden was just 2 weeks old, but the comfrey was starting to come up in the garden. Previously I’d only used comfrey, infused in oil for external use in the healing salve that I make each year. This was the first attempt at making a decoction with fresh comfrey leaves. I could also have used mullein to help the bone heal, but at this time in the season, the comfrey had a head start over the mullein in my garden.

Making a comfrey decoction to help the bone heal

I picked some young comfrey leaves and chopped them finely for the medicine. Initially I thought that since the leaves were fresh, pouring boiling water over them would be sufficient to extract their medicinal qualities. But the leaves didn’t wilt or release their medicinal qualities with just boiling water. Plan B — I simmered the leaves for 5 minutes, with a lid on the pot and then shut off the heat. I let the herbs cool naturally in the pot and then strained out the leaves. This gave me a stronger decoction. The flavour was “green” and fresh. I put it in a mason jar in the fridge. (It will keep for about 5 days.) 1 quart was enough to put 1 1/2 ounces in each of his bottles for about 3 days. 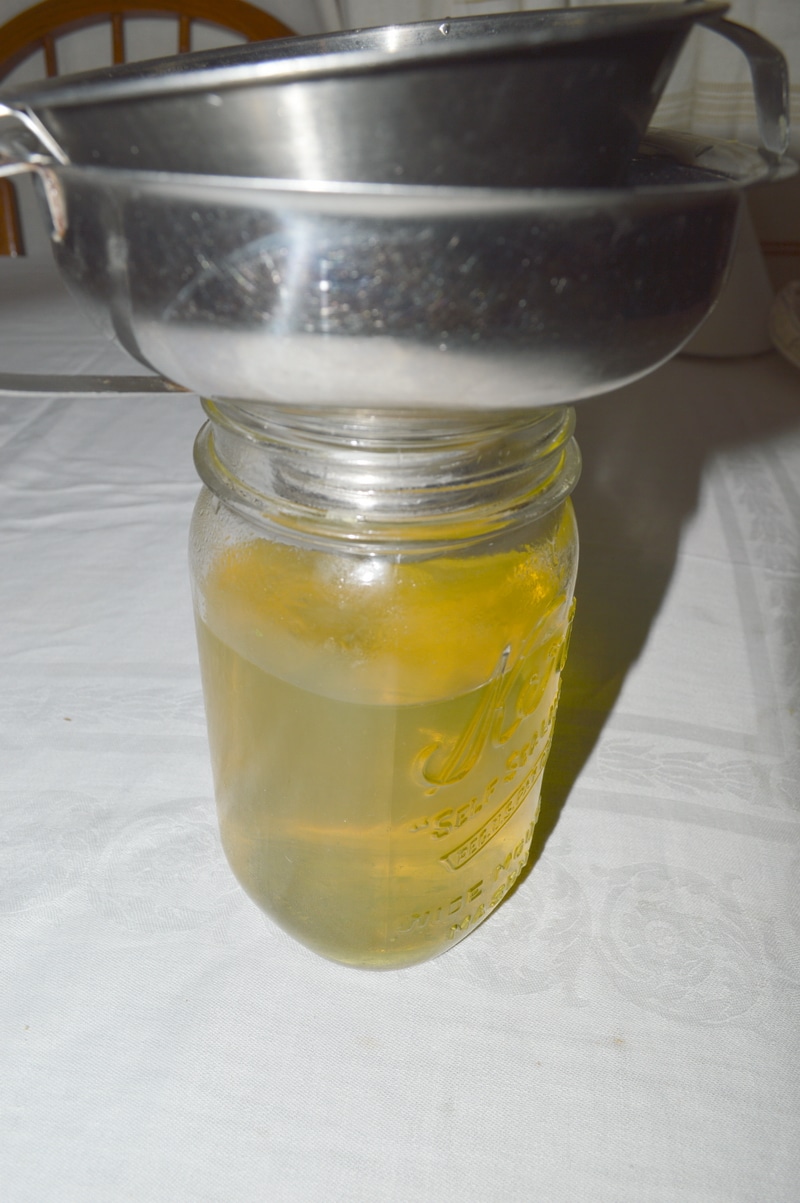 Along with the comfrey, I put a tsp. (approx. 5ml) of St. Johns wort tincture in each of his bottles for the first 3 days, then cut down to just at bedtime. After a week he no longer needed the St. Johns Wort tincture for pain, and inflammation. He was eating well, and beginning to bare weight on his foot.

Splinting the broken leg to stabilize it

Along with the herbs, we splinted his leg using natural wool, wooden craft sticks, the size and shape of tongue depressors, and the stretchy veterinary bandages wraps. Thankfully the skin around the wound wasn’t broken and we didn’t need to take him to a vet for stitches or surgery. 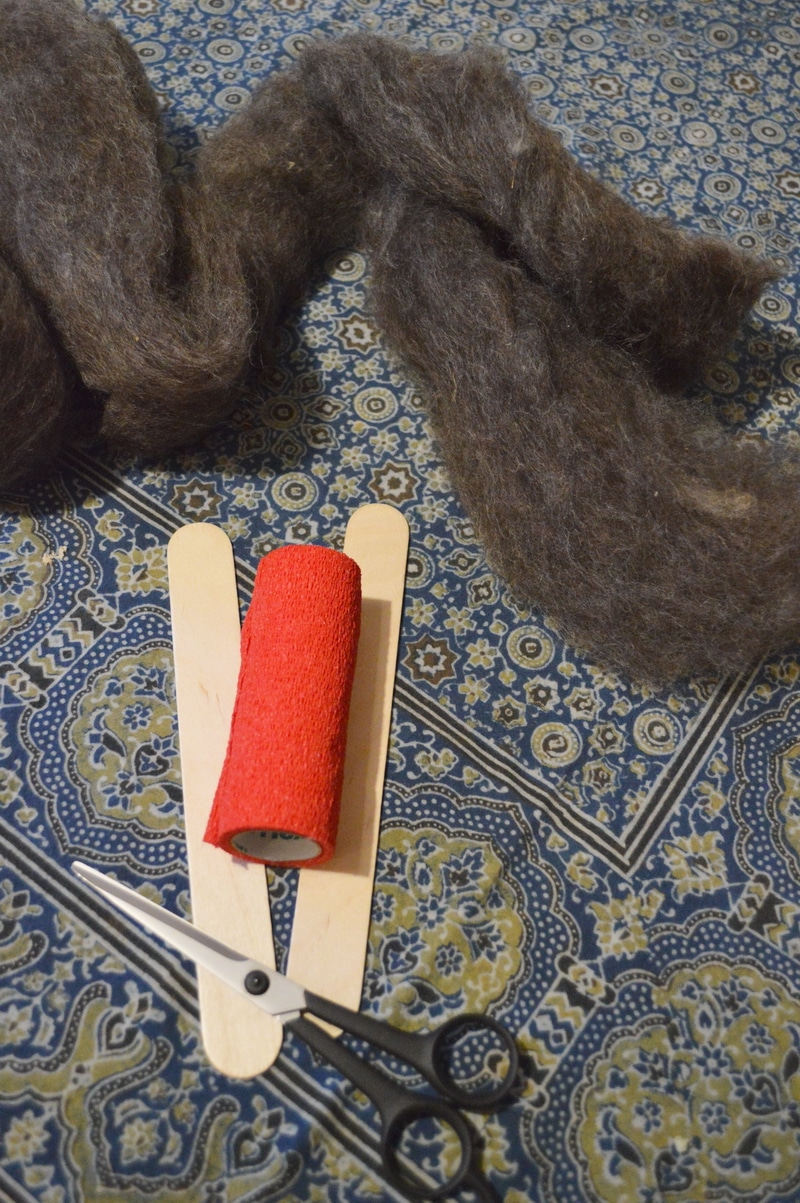 What you’ll need to splint a leg:

We splinted the leg, stabilizing the knee joint and the hock, giving support. I had lots of natural wool roving available. We wrapped the leg in this to provide a cushion, so that his skin wouldn’t be rubbed raw by the friction of the splint against it. The wool kept it warm and stopped it from sweating, which might promote fungal infections. Wool is naturally antibacterial and will maintain the lamb’s normal temperature, even if it gets damp. It will also wick moisture away from the lamb’s skin keeping the wound dryer.

We had to splint the leg three times before we got it right. Here’s what we learned: 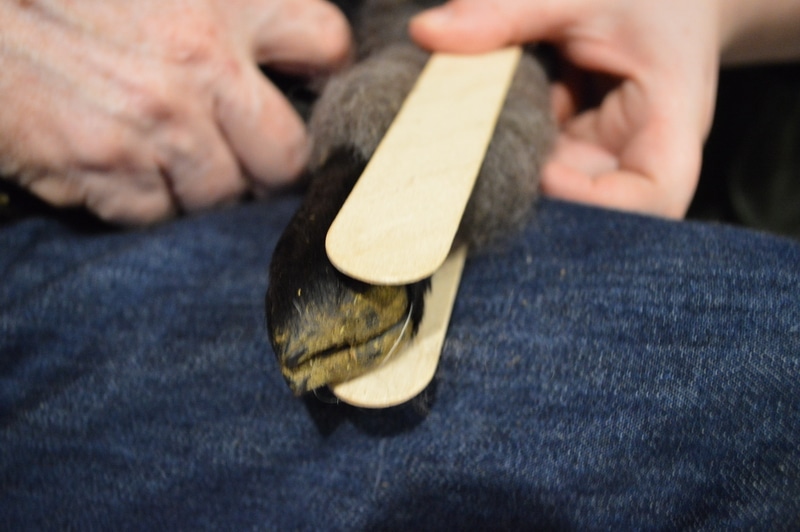 I added St. John’s Wort tincture to his bottle – 5ml 5 times a day in the first 3 days, to reduce inflammation and help him cope with the pain. We wanted him to sleep as much as possible to allow the limb to rest. (St. Johns Wort Tincture: Made with 4 cups of St. Johns Wort Flowers, pressed down in a 1 litre wide mouth mason jar, plus as much vodka as the mason jar would hold – about 600ml. – tinctured for 6 weeks – then strained and bottled.)

On the 4th day, we re-splinted his leg – he was actively growing and had gained height and weight. There was no noticeable swelling or heat on the leg, so we changed the St. Johns Wort tincture to 5ml just in his last bottle of the day. After two weeks, he no longer needed the St. Johns Wort tincture and was back in the barn with the rest of the flock, still being bottle fed, but spending the day with his twin brother and his dam. 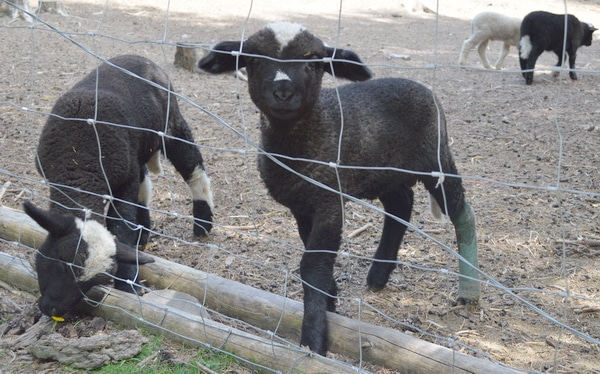 Update: After just 4 weeks Comfrey’s leg is fairly strong and he is using it.  It is the same length as his unbroken leg — so it is growing! Yay!  And, while we’ve kept the splint on, he is jumping and running as if the leg was whole.  In two more weeks we’ll remove the splint.  I’m confident, with the way he is moving that the leg is fully healed, but since the splint is not too tight, I think it will help him to have some additional support for a few more weeks.  Every few days we stick a finger in the top and bottom of the bandage feeling for unusual heat or if the bandage has become too tight.  So far so good.

I’m excited about sharing this success with you, because conventional wisdom says, if a lamb, goat, or horse breaks it’s leg, it will never recover, and you should “put them down.” A local farmer had a ewe with a broken leg and she left it untreated.  The ewe never healed and just learned to live life with 3 legs.  That’s just sad.

I was told by neighbors that I’d be better off to put the lamb down as it would never heal.  Not only has the lamb healed but he is the same size as his twin brother!  That’s them together in the picture. ^^

I made up a Monograph on Comfrey for you to add to your herb binder.

Download the Herbal Monograph on Comfrey. (Free PDF for your herb binder).

Previous Post: « How to Make Floral Hydrosols from your own Garden
Next Post: Making zoom balls: Herbs for those times when your get-up-and-go got up and went »