Are you making it too hard? Homestead consistency makes it easier
You are here: Home / Breathe / Are you making life harder for yourself? Try this instead.

Today, I want to talk to you personally.  I’ve noticed a few things and I think that maybe you’re making life harder than it needs to be.  Homesteaders often identify with a group of people that are nonconformist, independent thinkers, trail blazers, pioneers, and purple sheep.   If you are a homesteader, though, you are more than an independent thinker,  you believe in sustainability, and self reliance and you have a dream of growing your own food, and living a back to basic life.  Something I’ve noticed though, is that sometimes, with our independent thinking, we make it harder for ourselves.

The day we got our sheep 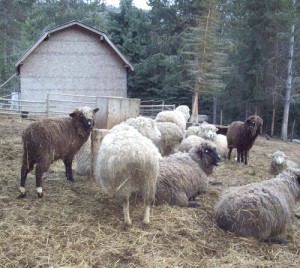 For instance, the day we showed up with our truck and trailer loaded with a ram and 7 ewes to Joybilee Farm, our 140 acre forest farm, we understood something.  We understood that we didn’t understand sheep.  We knew that they would follow each other and if we could just get the first one out of the trailer to go down the ramp and into the barn, all would be well.  They would all follow, right?  Well the first one unloaded perfectly, and then the second.  Whew!  But the third fell off the ramp on the way down and then, terrified, ran the opposite direction, followed by 4 more ewes.  And scatter they did.  It was almost sunset in late August.    And we had 5 ewes, who didn’t know our farm, running through the trees in terror.  We ran after them, trying to corner then and drive them back to the barn.  However,  just as the flock got close, terror seized them and they twisted away from the door, plunging back into the forest.  Night was coming and the woods were filled with coyotes, bears, and cougar, at least this is what went through my mind.

Have you ever heard someone get frustrated with a flock of sheep because the sheep wouldn’t go where the person was pushing them to go.  “Stupid sheep!” you probably heard, and maybe even some PG13 vocabulary.  Well that was us the first night we brought this flock home.  The flock didn’t know us.  The flock didn’t trust us.  And worse we didn’t know them.  And we didn’t understand the nature of sheep.  We made it harder on ourselves by getting mad and deciding that sheep are just stupid.  (We’ll overlook the fact that they outsmarted us!)  After a while, we gave up.  We walked away to cool off.  Night was closing in.  Then something amazing happened.  The two sheep that were still in the yard, “baa’d”.  And the scattered sheep gathered together in a tight group.  And came back to the fence.  And we only had to direct them through the gate and into their paddock and safety from predators.

Working with the nature of the beast
Actually, sheep are the easiest animals on the farm to work with, once you understand their mindset.  When you know their natural bent, you can work with it and easily gain their cooperation to do exactly what you want.  A handful of oats helps, too. Let me explain briefly, what I mean.  Its against the sheep’s nature to be driven from behind.  When you try to force them to move forward by getting behind them, they perceive you not as their leader, a person to follow, but instead like a predator — the wolf.  And so they do as a flock, what the flock would do if chased by a wolf.  They scatter.  Not exactly what you had in mind.  Stupid sheep!  The person who drives the sheep from behind has just made the job harder on himself, like we did when we first brought the flock home.

There’s an easier way, a way that takes into account the nature of the sheep.  If instead of pushing them from behind, you get in front of them you’ll have an easier time of it.  While the cowboy drives the cattle from behind, the shepherd leads the sheep from the front.  And the easiest way to do this is to take the lead ewe — usually the oldest one in the flock, and coax her a bit with a handful of grain, and then start walking.  That old girl will follow you even around a blind corner.  And guess what?  The whole flock will come along, too.  Oh, they are pretty smart after all.  And you’ve just found an easier way to manage a difficult task because you worked with the nature of the beast rather than against it.

Some of you have a dream of homesteading. Some of you are already homesteading and have a few chickens and maybe some goats, sheep, or even alpacas.  Others of you are just reading along for entertainment or to relive a dream you once had.  So maybe you will think that what I am going to say next doesn’t apply.  But keep listening to my story and I think you’ll catch my drift.

Consistency grows trust
Homesteading is a whole lot easier when you work with the natural bent of the animal.  It really improves when there is some trust between the animals and the shepherd.  That old ewe follows the hand that holds the grain up the hill and brings the others with her, because she trusts the hand that holds the grain.  If it was a complete stranger, someone she had never seen in her life, she would be acting like it was a wolf in shepherd’s clothing.  Trust me on this one.  And that trust in the shepherd is developed over a long relationship that has its hallmark in consistency.

Show up daily and be consistent and you will gain trust
Now as a nonconformists, and a trailblazers, consistency may not be your best quality.  But inconsistency is a habit and habits can be changed.  Showing up daily, and being faithful will bring out the best in your animals.  It works with people, too.  Successful homesteading is about consistency and being faithful to show up. Your animals count on you showing up at the same time every day to feed them, water them, walk among them, and even to let them out to pasture, when the weather is right. When you don’t show up they get anxious. They lose trust. Trust is key to having their cooperation day to day. Practice consistency in your life before you get your homestead and it will be easier when you are living your dream.  Consistency, in fact, is the forerunner of trust in all your relationships.

If you’ve already blown it, forgive yourself and start today to live consistently and faithfully.