Gardening is recommended as a way to become more in tune with the natural environment. Moon gardening takes advantage of the natural cycles of dryness and moisture throughout the month to help you get the most out of your gardening endeavors.

Last night was the “harvest moon”.  Just before moon rise the sky clouded over and we missed the promised spectacle of a super-moon coming up over the mountain just after dark.  A few hours later the sky cleared and the moon shone brightly on the plastic sheeting, draped over my raised beds.  It was a bright night.  The coyotes were out hunting and the dogs barked.  It was a typical full moon.  Even the nutcases in the nearby towns were out provoking the sane people to consternation.

The homestead lifestyle is a lifestyle in tune with the moon.  Being a city girl who moved to the country as a young mom, I wasn’t used to being out when the moon was up and often the tall buildings obscured the moon from view.  The moon phases were an enigma — confusing and something to avoid looking into, probably part of the occult. 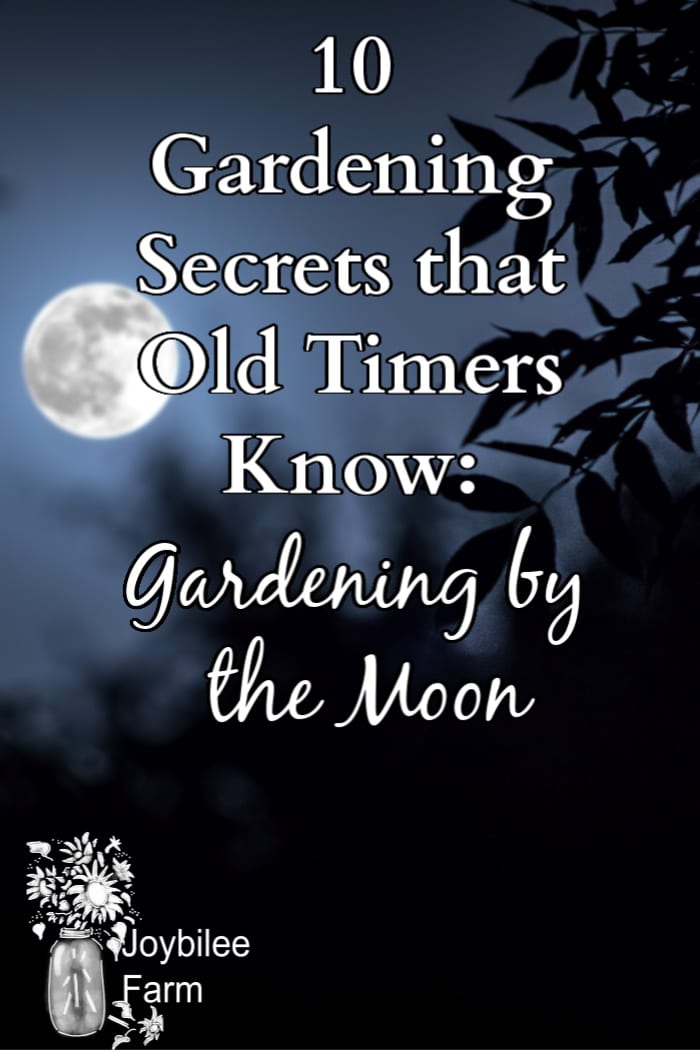 The day I first noticed the moon

Now the word “occult” simply means hidden and since I didn’t look, these secrets that the old timers knew, were hidden from me.  That is until we moved away from the city and started to homestead full time here on the mountain.  I started noticing the moon.  The first time it got my attention, it crept over the horizon one July evening, as we were driving home from Grand Forks (BC).  Robin’s brother drove the car ahead of us and had pulled over at the summit.  Sarah rode in the car with Aunt Laverne and Uncle John, and we followed close behind.  Sarah saw a wild apple tree and wanted to see if the apples were edible.  Her uncle John is good like that.  He stopped. We pulled off the highway ahead of them and got out of the car to walk back to their car.

That’s when I saw it.  There was the moon, a huge round ball of silver sitting on the highway, bigger than I had ever seen it.  At first it confused me.  It was so big.  It was so round.  And it was still daytime here — about 9pm.  Then I remembered homeschool astronomy and how the earth’s atmosphere distorts the size of the moon when it is near the horizon, making it appear much larger.  It was majestic and beautiful and powerful.  The biggest moon I’d ever seen.  Out here in the mountains, we miss the atmospheric distortion of the moon on the horizon most of the time, because the mountains obscure the horizon.  By the time we actually get to see the super-moon it’s high in the sky already.  That huge August, super-moon of several years ago is indelibly printed on my mind.  And it triggered in me a yearning to understand more about the moon. 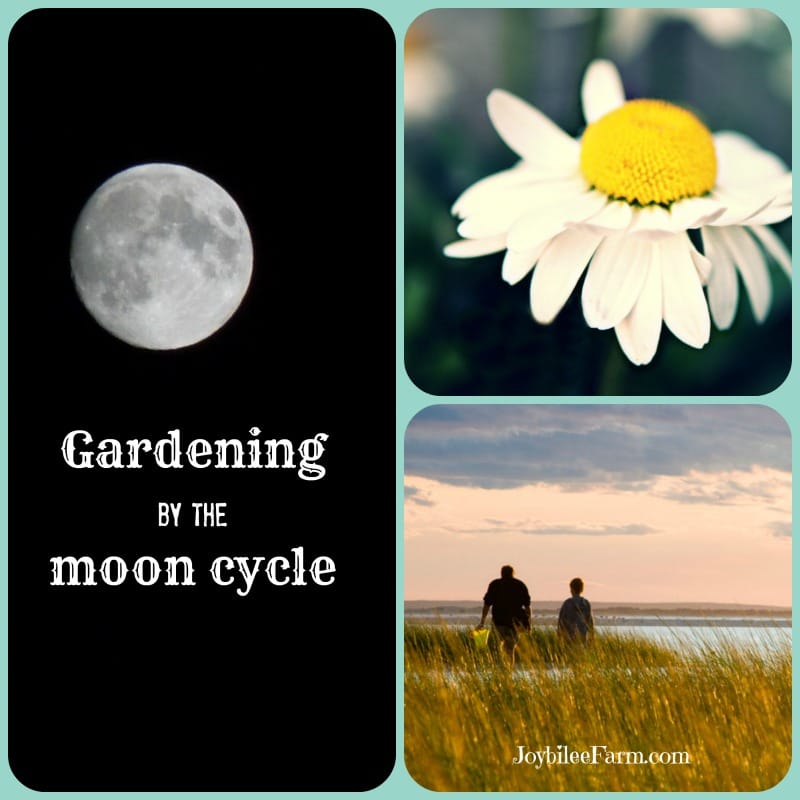 Paying attention to the phases of the moon

During our almost nightly walks, after dinner, we notice the moon phases.  The moon rises in a different place each night as it makes it’s way across the evening sky.  At the new moon, you can’t see it at all, unless there is a solar eclipse.  Then it rises just after the sun like a clipped piece of fingernail in the sky, almost due east.  The very next night it is a little bit east and south and the crescent is thickening.  Each night we follow it’s path as it rises during the waxing phase, thickening and moving eastward in the southern sky.  Within a week it is rounding out and just 15 days after the new moon, it rises due East in a glorious display.  Then it begins to wane, rising later and later at night, and we begin to see it in the morning sky, until it disappears all together, in the brightness of the setting sun, on the day of the new moon.

The moon reflects the light of the sun, as you well know, but it also has its own power.  The gravitational pull of the moon exerts its influence on anything that is mostly liquid — that includes the ocean tides, the molten core of the earth, the volatile oils in plants, and the movement of underground springs.   Just ask school teachers, psychiatric nurses, midwives, and policeman if the full moon can affect humans.  They will tell you, indeed it does.  Even some women’s menses come with the moon cycles.  When you are in the city you think that the best we can hope for is to hide from the werewolves and zombies and come out once the moon cycle has waned.  But when you are a gardener or a homesteader, you learn to harvest this occult, as in ‘secret,’ power for your own use.  Seriously, there is nothing magical about working with the seasons and the moon cycles, it could even be scientific — so don’t let the fact that this information is little-used deter YOU from using it to your advantage.  It’s not cheating to do moon gardening.

Once you understand about the influence that the moon has on liquid including sap, water, and molten metal, you’ll be able to use this information to time the different gardening activities that you do each month, to work smarter instead of harder.  Gardening by the moon cycle makes so much sense.  Here’s a quick tutorial to get you up to speed.

Gardening by the moon cycle

The New Moon is the wet period of the cycle.  It is the most likely time for rainfall and that makes it the best time for transplanting and planting out vegetables that you eat the above ground parts.

1. Rain or heavy dew comes with the new moon, its a good time to plant.

2. Transplant your seedlings during the new moon and the beginning of the waxing moon.

3.  Just before the new moon transplant fruit trees, strawberries, and landscape trees, to take advantage of the heavier dew and moisture.

The Full Moon pulls water up into the root system of plants.  It is also pulls water into the sky and usually, though not always, signals a period of clear, dry weather.

4. Plant root vegetables during the full moon and the first week of the waning moon.

5. The full moon often brings with it fair weather and wind — time to harvest seeds and grain.

Its a good time to dry out your seed crops and grain crops.  Plan to harvest within a week of the full moon, to avoid the damp dews that come as the cycle moves closer to the new moon.

Harvest season usually comes with the full moon of September

6.The full moon of September often brings frost, here in the mountains.

Cover your tender plants before the full moon and during the waning moon.

7. Harvest herbs with high volatile oil content at the full moon, when the oils are strongest

The gravitational pull of the moon coupled with the dry weather enhance the volatile oil content of the herbs like basil, sage, thyme, and mint.

8.  Cut fragrant flowers during the full moon for optimal fragrance.

9.  Harvest grain crops during the full moon and the first week afterwards.

10.  The waning period one week before the new moon is usually dry.

This is the best time to mulch the garden, weed, prune fruit trees, divide your plants, and deal with insect pests, and fungus problems.

That’s the your basic guide to tapping into the moon gardening secrets of the old timers, so that you can successfully garden by the moon cycles. Check out these cheap gardening tricks to get the  most value out of your garden this season.

What’s your old timer’s secret for getting the most from your garden? Leave a comment.