Coconut Oil is an amazing food.  I was introduced to it 5 years ago by a WWOOFer who was visiting Joybilee Farm from Israel.  Ruth was a trained chef, and scolded me for frying eggs in olive oil.  She informed me that I was creating cancer by heating olive oil to high temperatures and using it in cooking.  Israel is famous for its olive oil, so I humbly conceded to her opinion.  Other highly refined, cheap, liquid oils, were even worse for high temperature cooking, I later found out.  They are mostly genetically modified and subject to rancidity before you even open the bottle.  Any liquid oil will smoke when you heat it, and this is what transforms a liquid vegetable oil into an oxidized, cancer causing free radical toxin.

2 years ago, (yes, that’s 3 years later.  I’m a slow learner.) Another friend, Kristine, gave me a cup of organic, virgin coconut oil to try.  This was Tropical Traditions Gold Label Coconut Oil.  It actually smelled and tasted a bit like coconuts.  I wasn’t really thrilled with the coconut taste.  Coconut wasn’t something I had even, ever cooked with.  When a recipe called for dried coconut, I usually omitted it as an extra, unnecessary expense, so I wasn’t in the know about the health benefits of coconut.  I looked Tropical Traditions up on their website and lucked out.  Tropical Traditions was having their monthly free shipping sale and I promptly ordered the 1 gallon bucket.  It lasted a month and I experimented with using it for frying, baking, and taking it by the spoonful to help jump start my thyroid, that was definitely not working up to par, after years of eating tofu, and cooking with liquid oils. That finalized my divorce with canola oil, corn oil, and pomace olive oil.  After learning more about soy, and its detrimental effects on thyroid, it also finalized my divorce from tofu.

But, although I’d read a few health articles about coconut oil that made me want to know more, I hadn’t spent the time to peruse the huge amount of scientific studies and blog articles about coconut oil that were available online.  So I was grateful to come across a copy of Dr. Fife’s book at my local Costco, (Ok, not so local – 3 hour drive from me – but the closest one around.) 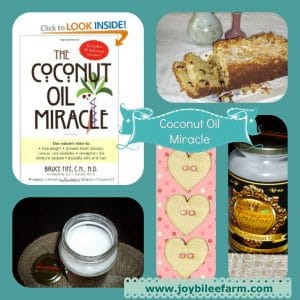 Dr. Fife begins by giving his own testimony to the health benefits that he found by personally using coconut oil. Dr. Fife is a certified nutritionist and naturopathic doctor.  He is president of the Coconut Research Centre.  The book is a compilation of scientific studies found in research journals as well as lots of success stories of patients who benefited from using coconut oil both in cooking, and in cosmetics.

“There were literally hundreds of studies published in dozens of the most respected scientific and medical journals.  What I learned was absolutely amazing.  I found out that coconut oil is one of the most remarkable health foods available.  I felt as if I had rediscovered an ancient health food that the world had almost forgotten about.  I also learned why coconut oil has been maligned and misunderstood.” (Fife, p. 3)

I’m really glad to have found The Coconut Oil Miracle.  It gathers the amazing health benefits of coconut oil into a single volume and pulls it together into easy to read chapters.  I was amazed when I read about all the things that coconut oil heals or benefits.  Ruth never told me that switching to coconut oil would actually heal my body.

It’s the medium chain fatty acids (MCFA) in coconut oil that are responsible for the beneficial effects of regular use of coconut oil.  It doesn’t seem to matter whether the coconut oil actually tastes like coconuts or is expeller expressed and has had most of the coconut flavour and antioxidants removed.   However, the antioxidants provide other benefits, including preserving the oil for long term storage.  Fife states that coconut oil can be safely stored for up to 3 years without rancidity and 15 year old oil has been found to remain stable and without loss of nutrients. .  You can safely buy the large containers of coconut oil when they are on sale and store them in your pantry, long term or add a few buckets to your emergency preps.  Buying certified organic ensures that the coconuts have been grown away from pesticide drift from other crops. Coconuts don’t usually get sprayed with pesticides and grow wild in many areas of their natural habitat, but certified organic coconut oil has to meet certain rigid qualifications to be certified.

How much should you use?

How much should you use?  I’ve seen recommendations of 3 to 5 tbsp. per day.  Choking down that much oil after years of following the low fat diet recommendations, from politically-correct diet diatribes, makes me nauseated just thinking about it.  I really am trying though.

Lots of my online friends suggest putting it my morning coffee.  I honestly tried, but the warm oil floating on top of my cup, and passing my lips left me gasping and gagging.  I stuck a spoonful in my mouth and swallowed like medicine, but I can only manage a teaspoon – not a tablespoon.  That’s after a year of regular use.

Its a potent detoxifier

What the book doesn’t say is that coconut oil is a potent detoxifier.  When you first start to use it your body will have a detox reaction as bacteria, viruses, and fungus are killed off and then have to be expelled.  If you’ve been exposed to a lot of nasty stuff, you may feel nauseated, get diarrhea, or feel exhausted as your liver deals with the massive die-off of bad invaders.  If you’ve been eating clean and living in a fairly nontoxic environment, you may not notice any difference, when you add coconut oil to your diet.  Make sure that you’ve removed from your diet as many toxins as you can.  Get rid of GMO foods, Aspartame, fake food, rancid oils, highly processed foods, smoking, and alcohol.  Reduce your exposure, as much as possible, to pollution, plastics, and chlorinated, fluoridated water.  If you continue to ingest this while detoxifying, you may feel worse.

Don’t begin your coconut oil regime with the maximum dose, especially if you’ve been on a low fat diet or have had your gall bladder removed.  Start slowly with a tsp. at a time.  Cook with it.  Use it as a moisturizer, so that you can absorb some of the MCFA through your skin.  Over time you will build up tolerance to the oil, get rid of the toxic invaders, and be able to work up to the suggested dosage, based on scientific studies, which is 3.5 TBSP a day or 50grams.

If you even begin with just a tsp. or two each day, you will still gain some benefit.  If you can’t tolerate coconut – hate the taste, or have a massive reaction – you can get the MCFAs in a few other foods.  Some other tropical oils also contain MCFAs – like Palm Kernel Oil.  Mother’s milk, raw whole dairy foods, raw full fat cheese, and organic butter are other sources.  Of these, coconut oil is the richest and least expensive source.

As always, if you are being treated for a serious medical condition check with your doctor before ingesting coconut oil.  Do your own due diligence.  And read this awesome book for yourself and find out about this “The Coconut Oil Miracle.”

Get the book for yourself:

Previous Post: « Secrets to Making clear broth and consommé from scratch, — It’s practically free and healthy, too.
Next Post: How to Get Rid of Carpenter Ants Without Poisoning Your Pets »