Easy to grow agastache plants, like anise hyssop (Agastache foeniculum) and giant Korean mint (A. rugosa) are rich in volatile oils and polyphenols.  Don’t overlook this garden asset.  They offer both culinary flavors and medicinal actions that improve digestion, reduce nausea, and ease the symptoms of colds and flu.  Learn to use agastache leaves and flowers in your own kitchen and herbal apothecary.

Anise Hyssop (Agastache foeniculum) is a native North American plant.  There are 22 cultivars of agastache and all but one agastache cultivar is a North American prairie native.  The outlier is Agastache rugosa or Korean Mint which is one of the 50 TCM fundamental healing herbs.  But it isn’t mentioned much in our modern western material medica. Even so, Agastache, like Anise Hyssop and Korean Mint, have been used in herbal remedies for centuries both in North America and in Asia. 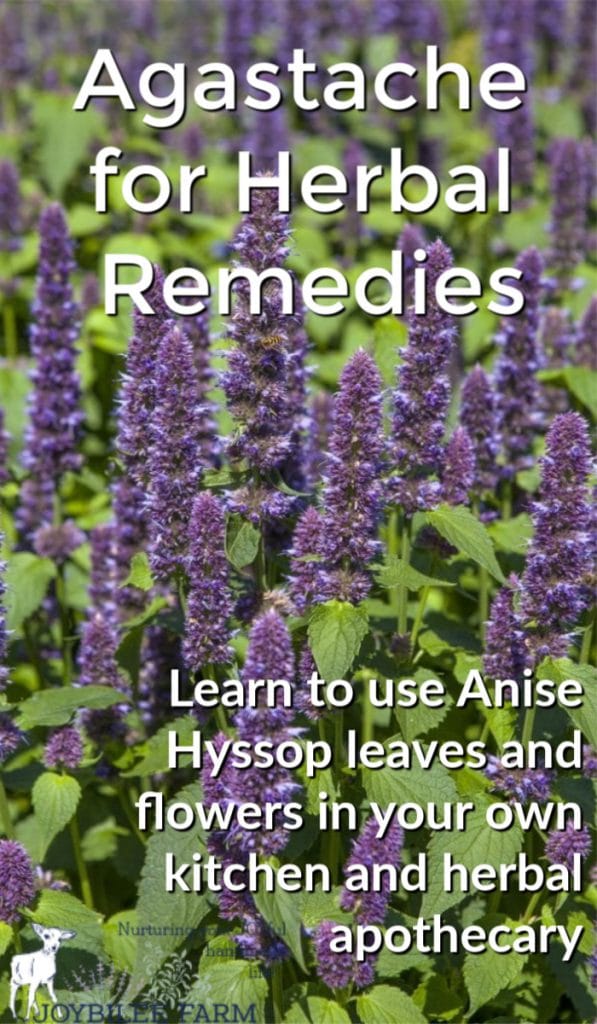 Named the “2019 Herb of the Year” by the International Herb Association, Agastache comes in many colors and flavors, from the minty licorice flavor of anise hyssop to the mild mint flavor of hummingbird mint and Korean mint.

With its minty, anise flavor Anise Hyssop is unrelated to both anise and hyssop.  But its sweet licorice scent and flavor is used as a carminative digestive for gas, upset tummy, and colic pains in much the same way that fennel and anise seed are used.  It is safe for infants, children and can safely be used by pregnant and nursing mothers in normal culinary amounts.  In fact, anise hyssop tea is recommended for morning sickness and infant colic.

The leaves and flowers are harvested for herbal tea and all parts of the plant are edible.  Leaves and flowers can also be used as an accent in salads or as a garnish.  The sweet flavor of the leaves is mild and attractive to children.

Energetics: warm and dry – In TCM Korean mint (A. rugosa) is used for dampness and to push Qi energy downward.

Anise hyssop is a native North American prairie plant and was used by the First Nations for many complaints.  According to the Richter’s Herbs website “The Cayuga, Cheyenne, Cree and Navajo used anise hyssop for indigestion and stomach pain, colds, coughs and fever, and for heart problems and other chest pains.” The Cheyenne also used the leaves to sweeten foods and for tea.

Agastache rugosa or Korean mint is used in Traditional Chinese Medicine where it is called, Huo xiang.  It is one of the 50 fundamental healing herbs of TCM. It is used in Asia in many of the same ways it has been traditionally used in North America, for colds, fever, coughs, indigestion, stomach pain, nausea, and diarrhea.   Korean mint and hummingbird mint are more minty than anise-flavored, however.

Agastache is rich in polyphenol antioxidants.  In Asia Agastache rugosa has been used to treat cancer, cholera, digestive issues, fever, headache, colds, indigestion, abdominal pain, poor appetite, and fever due to heat stroke.  It is antiviral and anti-inflammatory and used for respiratory issues as well.

It is useful for respiratory, digestive, and circulatory health, as well as to calm the symptoms of colds and flu. Anise hyssop has also been used for cold sores and for herpes simplex due to its antiviral actions.

Use strongly fragrant anise hyssop or Korean mint in infused honey by clipping the partially opened flowers and immersing them in liquid honey.  Cover the jar with a tight lid and rotate the jar daily for 3 weeks.  Strain and reserve the honey.  The flower stems will retain some honey.  Use these in tea.  The infused honey is useful for coughs and sore throats.

Clip the branches above two leaves, just as the flowers open.  This mint family plant will produce two stems for each stem that was clipped and continue to flower.  Bundle these branches and tie together by the handful.  Hang upside down in an airy room away from direct sunlight. Dry them for tea.  Remove the leaves and flowers from the stems once fully dry and store in glass jars with tight-fitting lids, protected from heat and light.

The dried leaves can be used as a seasoning, infused for tea, infused in vinegar for salad dressing.

A jelly can be made from the strong tea to serve with meat.  It is especially beneficial to help with the digestion of fatty meats like pork, which tend to lie heavy on the stomach.

Cough syrup can be made by infusing a strong tea with agastache leaves and flowers, then using the tea to make a heavy syrup using 2 cups of organic sugar to one cup of tea.  This syrup should be preserved by canning or freezing to prevent spoilage.  Keep open cans refrigerated.

The fresh leaves of anise hyssop can be added to bitters tinctures for added flavor and digestive aid. Try ¼ cup of finely chopped fresh leaves or 2 tablespoons of dry agastache leaves in a 1-quart jar with other carminative digestive herbs like orange peel, cacao, ginger, cinnamon, or other mints.

The minty anise flavor can be used in bread stuffing for roasted poultry, in the place of sage.  Taste the individual plants, as the flavor can be different between plants.  Some suggest using anise hyssop in the place of tarragon in the kitchen. The use of carminative herbs like sage, anise, rosemary, thyme, and oregano aid the digestion of fats and inhibit bacterial contamination of the food.

The steam distilled essential oil of Anise Hyssop is 94% Methyl Chavicol, responsible for the strong anise flavor in the leaves. There are 77 different components reported as making up the Agastache essential oil, though the others play a minor role. It was tested and found effective as an insecticide against grain beetles.  The essential oil is antifungal, antibacterial, insecticidal, antiviral, and anti-inflammatory.  It is generally considered safe for human consumption and has been used as a flavoring oil and in perfume.

If you aren’t already growing Agastache foeniculum (Anise Hyssop) or Agastache rugosa (Korean Mint) in your herb garden or perennial bed consider planting a large swath of one of them for the pollinators and use the harvest in the kitchen and in your herbal apothecary.    Find out more about growing Anise Hyssop in the garden here.

70 Medicinal Herbs to Sneak into Your Organic Garden

Planting an Herbal Tea Garden that Thrives in Zone 3

Companion Planting with Herbs to Increase Biodiversity and Improve Yields

Previous Post: « The Fastest and Easiest Sauerkraut You’ve Ever Made
Next Post: What if All You Had For Herbal Remedies Was Your Spice Cupboard? »