The King of the Golden River and Homestead Abundance

One of my favorite stories when I was a child was “The King of the Golden River” by John Ruskin.   Did you ever read it?  It tells the story of Gluck, the youngest brother of 3 boys, whose parents had passed away.  The 2 elder brothers, Hans and Schwartz, were selfish and lazy.  They were miserly with others, and abusive to Gluck.  They punished Gluck for minor infractions, while being lazy, violent, gluttons themselves.  Gluck was kind-hearted, and generous, in spite of his abusive childhood.  When an old man, really Southwest Wind, mysteriously appears on his doorstep, in a rainstorm, Gluck invites him in and shares his own meager meal.  He incurs the abuse of his elder brothers for doing so.  Southwest Wind punishes the brothers by turning their fertile valley into a wasteland of red sand.  The brothers give up farming and become goldsmiths, increasing their gluttony and violence. 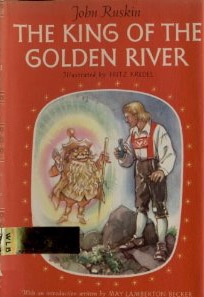 Gluck is invited, by the King of the Golden River, to climb to the top of a mountain and to sprinkle 3 drops of holy water into the “Golden River.”  If he succeeds in his quest the river will turn to gold for him.  If he fails he will lose everything and turn into a large black stone.  When Hans and Swartz hear of the quest they abuse Gluck.  Then they duel with each other, each wanting the gold at the top of the mountain for himself.   Each brother is tested in his greatest moral flaw, and fails the test, never reaching the treasure.  Gluck then makes the quest, taking with him holy water.  Gluck faces the same moral tests as his brothers and wins.  It is in sharing his meager supply of Holy Water, and giving up the quest, that Gluck actually gains the treasure.  The river flows again into the valley, making his homestead fertile, once again.  And Gluck, the new land owner, is generous with his neighbors and with strangers.

The King of the Golden River or the Black Brothers A Legend of Stiria.

The golden treasure of homestead abundance

The treasure of homestead abundance is for the courageous and the industrious.  It is not in the kingdom of the whiner, nor in the stronghold of the slothful, or those looking to get rich-quick.  Like Hans and Swartz in our story, those who are jealous of the abundance of others won’t find abundance in their own home or garden, even while it lies right under their gaze.

What can we learn about homestead abundance by looking at Gluck?

While his brothers were drinking, and carousing, Gluck was faithful in his work every day.  He didn’t join his brothers in their meanness, but remained his own person.  His hardwork pays off.

Gluck doesn’t let the abuse of his past be an excuse for failing to act today.  Nor doesn’t he use the fear of future pain, prevent him from helping Southwest Wind today.  He does what is required of him.

Gluck played by the rules.

Hans and Swartz cheated by stealing holy water, or buying it from a Bad Priest, fearful that if others knew about their quest, they would lose out.  Gluck on the other hand was given the Holy Water by the Priest, willingly.

Gluck put others before himself

He was unselfish even when it meant that he might lose everything.  Hans and Swartz were selfish, and greedy.  They were turned into black stones in natural consequence of their “hearts of stone”.  Gluck on the other hand, was generous to his own hurt, giving up the last drops of his holy water to a prostrate dog, giving up the quest for riches.  The dog transforms into the King of the Golden River, who produces 3 drops of Holy Water for Gluck to toss into the river, redeeming the sacrifice.

“He who is faithful in the little things will be given over much.”

Those he was generous to, gave back to him in friendship and kindness.

Gluck is generous to Southwest Wind at the beginning of our tale.  Although he is punished, with his brothers, in the desertification of his property, the consequence is turned around due to Gluck’s kindness, in the end.  Southwest Wind had friends.  And those friends were kind to Gluck.

Homestead Abundance is for people like Gluck – courageous people with a vision for the future, who are willing to invest in the work today.  It is not for lone rangers who don’t need anyone else.  It is for people who purposefully make friends.

Yesterday, my neighbor brought over a truck load of hay for us.  We bought the hay but couldn’t get it home without help.  Our farm truck is in the shop right now, so we weren’t able to pick it up.  Yesterday Mr. Joybilee was working late at City Hall, and our neighbor not only delivered the hay, but stacked it in the hay loft, too.  Friends are a very important facet of rural living and a key ingredient in homestead abundance.

Your assignment this week is to make a new friend, an investment in future abundance.  Do you have a neighbor that you haven’t met yet?  Is there someone new at your club or church?  Make a point of saying hello and finding a way that you can be as helpful as possible to them.  Making new friends is an investment in your future homestead abundance.